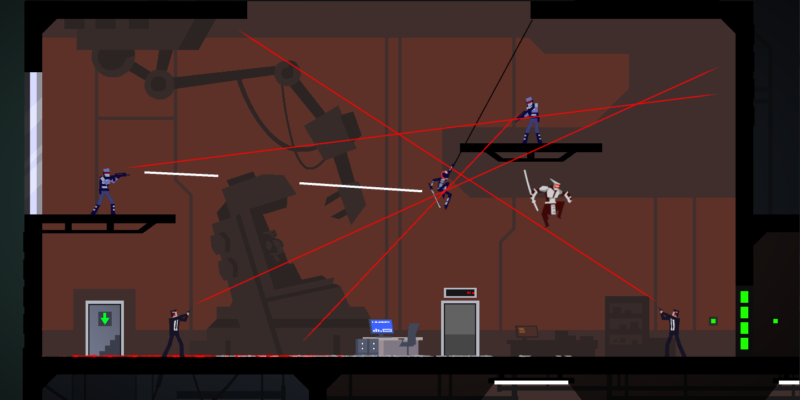 Tomasz Waclawek’s Ronin has been sneaking about in Early Access for a while, but will soon be ready to leap out and surprise people with a full launch on 30 June. Although it’s less of a surprise now that I’m writing about it.

Originally described by Waclawek as a ‘Gunpoint rip-off,’ Ronin had to adopt a new tag-line after Gunpoint creator Tom Francis played an early version of it and said “nah, it’s really cool and pretty different from Gunpoint.” Disaster! And also quite flattering, I’m sure.

So, instead, now think of it as a “turn-based ninja platformer” that also looks a little like Gunpoint. As a vengeful, motorcycle helmet-clad heroine, it’s up to you to use your ninja talents to get through fifteen missions and take down five heads of a powerful corporation. By “take down” I’m pretty sure I mean “stab to bits with your massive sword.” Or cripple with razor wire. Or swing into them with a grappling hook. Whichever.

The ‘turn-based’ aspect is something I’ve not totally got my head around, though the gameplay video below gives a reasonable idea of what that’s about. It appears that when you’re primed and in position on a wall (or whatever,) the game kind of pauses while you make some decisions about how you wish to strike. Maybe. It’s one of those mechanics that probably translates better when you’re just playing the game. Looks pretty neat, anyway.

Ronin is going to sell for £10 GBP/£15 GBP for the standard and special editions, respectively. There’ll be an extra 25% off at launch. The special edition has a bonus comic and soundtrack bundled in.

By Sam Robins30 mins ago
News