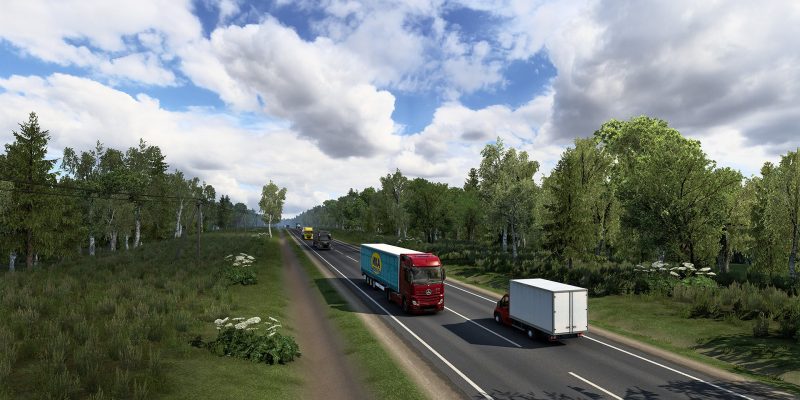 Dubbed the “Heart of Russia”, this next map expansion for Euro Truck Simulator 2 will take the sim in a new direction — literally. Until now, ETS2 has featured countries from southwest Europe. Euro Truck Simulator 2’s Heart of Russia expansion will take players deep into the eastern region of the continent to drive through its largest country, Russia. SCS is building its virtual road network all the way into the country’s capital of Moscow, “and beyond.”

That sounds like a big undertaking, and it is. Russia itself is 17.1 million kilometers² (6.6 million square miles). For comparison, the US is a mere 9.83 million kilometers² (3.79 million square miles). Considering that the team hasn’t even come close to covering all of the US as yet for American Truck Simulator, then by no means should it be expected that all of Russia will be included in this expansion for Euro Truck Simulator 2. And SCS made sure to highlight this fact in its announcement. Instead, the main goal for this expansion is “to reach the upper Volga river.” Despite that being only a portion of the country, it’s still going to be larger than the Iberia expansion, and that’s going to encompass mainly Spain and Portugal.

Getting off the ground in Russia

SCS states that this Euro Truck Simulator 2 expansion is still in “very early development” and so, a release date cannot be committed to as yet. Its development team has not even been fully assembled yet, but SCS states that it’s making “excellent progress on some areas of the project.” Some of this progress can be seen in the screenshots that have been released. Here are some of them:

By the sounds of it, Heart of Russia’s release is still very far off. Perhaps we may very well still be learning more about it at this time next year. But, considering this will be the largest single expansion that SCS has ever produced to date, it’s no surprise that it will take some time. As a result, SCS is asking its fans to please have reasonable expectations for the development cycle of this next expansion.

At the very least, you can still wishlist it on Steam as of today.