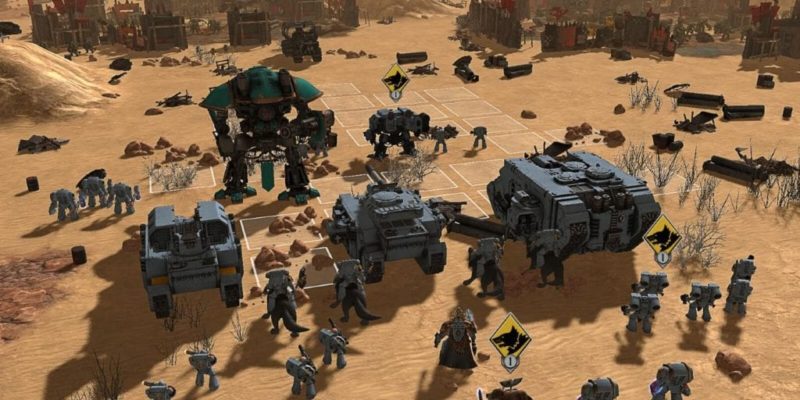 It’s all going a bit Warhammer at PC Invasion this month. The Wood Elves have popped out of the trees in Total War, and Tim may, thanks to Deathwing, be currently walking in a small circle mumbling “The Xenos are uncounted, The Xenos are uncounted”. Meanwhile, I’ve been taking a look at an early, single level version of Straylight Entertainment and Slitherine’s Sanctus Reach.

Emphasis on both the “early” and “single level,” there. This is the same demo version that has been present at trade shows, and as a result it’s quite Work In Progress. To the extent that, as you’ll be able to see from the screenshots, it says ‘Work In Progress’ across the top of the screen at all times. Aspects of pretty fundamental things like the User Interface are not finalised in this build, so anything I show or mention here could be subject to some change.

I feel fairly confident that Sanctus Reach won’t mysteriously switch from being a turn-based strategy game into something else, though. So let’s continue with that assumption. 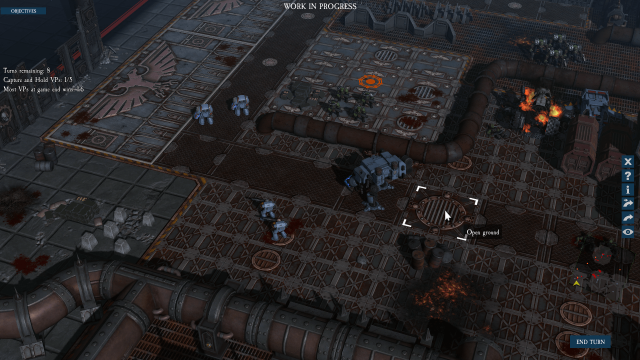 It’s been a while since I tried my hand at tabletop Warhammer 40,000, but, judging by the contents of this build, the game will be taking some of the fundamental aspects of the little-models-on-a-green-tablecloth version without directly replicating the rules. That is to say, the models don’t make use of the tabletop stats (‘Ballistic Skill’, ‘Leadership’ and all that), but when presented with a unit wielding a Lascannon you can be confident that firing it at an enemy Dreadnought is a solid idea.

Sanctus Reach may adopt different systems, but the basic assumptions from the tabletop can be applied. Ork Boyz are numerous, but are generally outmatched by Space Marines. Terminators will stand up well against almost anything. Heretics must be purged. And so on.

The name itself refers to a tabletop campaign supplement, dealing with an Ork invasion (or ‘Waaagh!’) of the titular planet of Sanctus Reach. As tends to happen in 40K fiction, the Space Marines ride to the rescue. Specifically, it’s the Space Wolves. So they ride there on wolves. 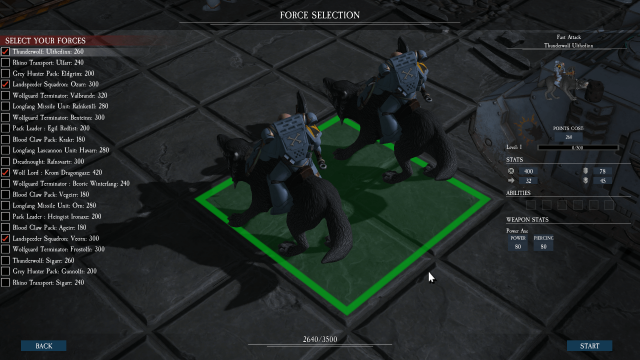 What, you thought I was kidding?

This demo level is said to be from around the mid-point in one of the two campaigns that’ll be included at release (along with skirmish battles). Both campaigns have you in charge of the Space Marines, it seems. Like the tabletop game, you select your starting units from a larger list up to a total points cost; so there’s some flexibility in whether you want to go vehicle-heavy, or adopt a more infantry-based approach.

On this particular map, victory is based on capturing and holding five of the seven key points on the battlefield (or, alternatively, holding at least four when the fourteen turn limit concludes). Neither is particularly straightforward, as the ruins are jam packed with Ork units eager to tell their little Ork grandchildren about the time they totally battered a stinkin’ Space Wolf oomie. Luckily, some reinforcements show up at designated points, including a towering Imperial Knight.

If you can find any in the city block ruins, then cover can protect your troops from incoming fire. Flying vehicles like Landspeeders can also gain advantages by cruising over (or perching on) higher vantage points. Opportunity fire is present too, making charging headlong into a throng of foes a pretty unwise move, even if you do have an urge to rearrange some Ork features with your Power Fist. 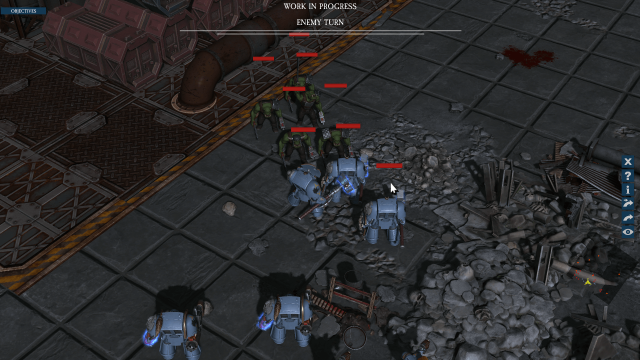 Or a Power Axe, in this case.

I wouldn’t say I have a full tactical grasp of how best to play Sanctus Reach just yet (some periodic lock-ups and crashes made finishing the level tricky; Work In Progress, remember), but some principles did emerge from my time with the game. As well as the aforementioned cover and snap-fire mechanics, it’s crucial to learn (or just have an idea, if you’re played 40K before) which weapons will work best against a particular unit type. Plinking away at an Ork Killa Kan with a Bolt Pistol isn’t going to get you very far.

There are the outlines of an experience points system too, which will ultimately mean improving and bolstering your preferred units as you progress through the campaign missions. Without actually levelling anybody up it’s hard to say what form this will take, but certain characters (like the Space Wolf Commander, who can boost morale) possess special abilities. If levelling doesn’t take the form of stat boosts, then abilities like that will most likely come into play.

Sanctus Reach doesn’t appear to be doing anything especially outlandish or unique in the realm of turn-based strategy, but it is sticking vigorously to its remit of adapting a Warhammer 40,000 campaign to the medium. If you’re as keen on pondering your next tactical move as you are on purging the planetary surface of Goff Boyz with the cleansing fire of the God Emperor of Mankind, it may just be the title for you.

Sanctus Reach will be released on 19 January.