The first time I played Syndicate on the Amiga 1200, it was pretty revelatory. It wasn’t even the full game, just a copy of a coverdisk demo which let you play a single stand-alone mission. The early nature of the build meant some of the user-interface wasn’t yet finalised either; but as someone who was upgrading from the largely monochrome efforts of the ZX Spectrum, everything about Syndicate seemed to cry out with opportunity. 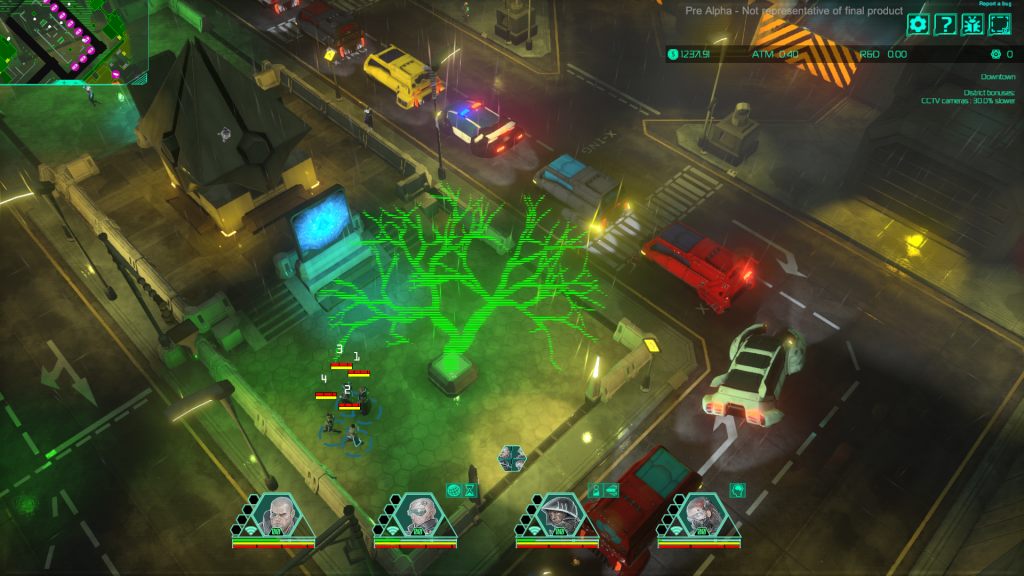 Everybody’s stopped to gawp at the holo-tree.

The term ‘next gen’ has been devalued by videogame marketing’s desperate attempts to implant it as a by-phrase for “this is new and exciting, you must have it for some reason!” and little else. It should only refer to those Syndicate-like moments, where a spectacular title on a new platform dazzles you with the prospect of mechanics you’ve never seen before.

An open city (albeit contained by today’s standards.) Graphic violence (pixelised, but still vicious.) Effortlessly cool cyberpunk themes (even though I didn’t really recognise them as such at the time.)

Over Christmas and New Year, I’ve been playing another Syndicate-like title with an unfinished user interface and a fraction of the proposed mission list: 5 Live’s Satellite Reign. Currently in Early Access, this Kickstarted title aims to recapture some of those Syndicate (and Syndicate Wars, with whom it shares a lead developer) thrills. 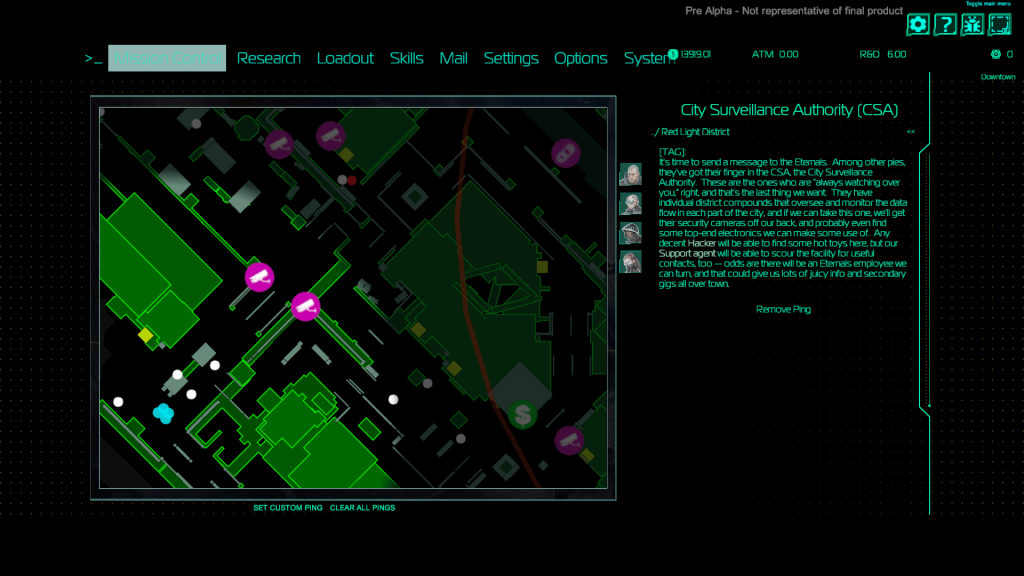 It’s one of the more alpha-ish Early Access games I’ve played (describing itself as “pre-Alpha” in fact,) which means plenty of placeholders and this-is-coming-laters and missing features, as well as some well documented optimisation issues. But what you can do right now is wander your set of four agent archetypes (soldier, support, hacker and infiltrator) around one sizable district of the suitably wet-neon city, taking on the handful of active missions presently available.

The city design is pure Blade Runner, right down to the Geisha-styled billboards and perma-rain (as long as you’ve not switched it off to aid your framerate.) Industrial compounds protected by private mercs sit alongside street markets and dubious nightclubs, the latter hoping to obscure the aura of sleaze with some gaudy lights and draped glitter. The pervading themes are of constant surveillance, desperate commercialism and oppressive violence. Pretty much what you’d be looking for in a Syndicate-inspired title, really.

Agent specialisations are where Satellite Reign diverts from the source material. Syndicate agents were generally pretty personality-free, distinguished only by whatever augmentations or weapons you bestowed upon them. This fit neatly with the overtones of disposable assets being sent to do the bidding of sinister corporations. In Satellite Reign, your pawns are rather more defined and have class-specific abilities. 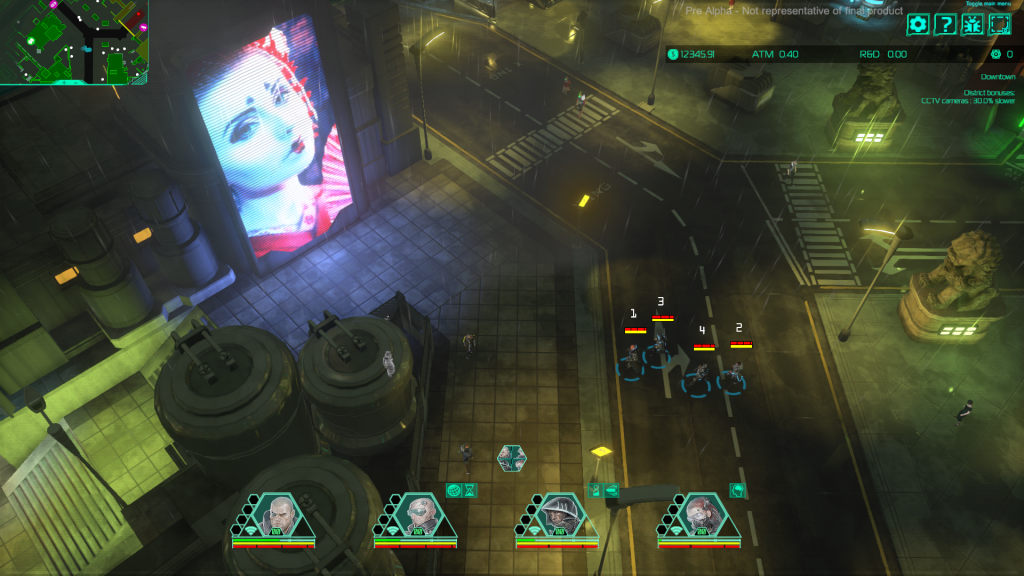 One umbrella with a glowing stem short of being Blade Runner.

The vast majority of the playable missions in this pre-Alpha version involve breaking into some form of guarded building, be it a warehouse or military compound or medical complex. Most will have at least two possible entrances; the main gate “I just can’t keep my ammunition to myself” option, and one or two sneaky side doors that are, in traditional videogame fashion, more lightly patrolled.

This is where you start making choices. Sending in four agents gives you the most firepower, but maybe a lone operative could get the job done just as well. Hackable barriers and security cameras complicate this issue, because you might need to send the specialist hacker along just to keep a door open; or use the support’s ability to tune into power networks to learn where the cameras are plugged in. Perhaps some of your other agents would be best served causing a distraction across the other side of the building, giving your infiltrator a window to use their (unlockable) skill with zip-lines to drop into the base.

For those who remember the isometric WW2-themed title Commandos, some of the base infiltration tactics in Satellite Reign may trigger fond memories. Right down to the one guy on your team who can sneak up behind people and knife/sword-swipe them to death. There’s a bit more focus on strategy than puzzle elements in Satellite Reign, and (thankfully) less emphasis on doing everything with absolutely perfect precision, but the feeling of using your individual agents as tools to unlock a particular compound is similar. 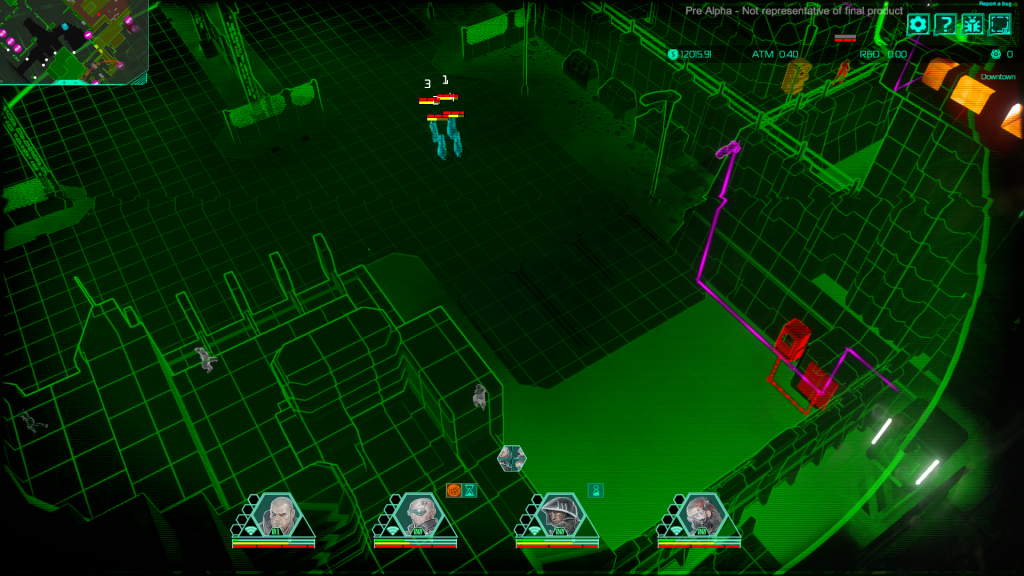 Electricians have it much easier in the dystopian future, at least.

Other aspects, like the research of plundered weapons (barely implemented in this build, but clearly planned,) agent augmentations and ‘persuasion’ of civilians are pure Syndicate. However, the latter has been toned down a bit from the hordes of brainwashed public who could end up following you through the streets in the original series (unless the chance to unlock that just isn’t in yet, possibly for frame-rate reasons.)

Aside from a fairly hefty selection of bugs (saved game retrieval, lost skill progression and inability to move agents among them,) which are accepted and recognised as part of this whole Early Access malarkey, my main frustration is with input delay and imprecise controls.

There are basically no repercussions for death in this build of Satellite Reign, but it’s still a bit irritating when your ingenious infiltration plan goes wrong because the finicky cover system puts an agent in the wrong place, or the hotkey switch fails to give you control of the right person in the midst of a fight. Hopefully there’s scope for giving the player a greater range of control, because heist missions where you require close control over each of your four characters and their tool-sets are definitely in this game’s future. 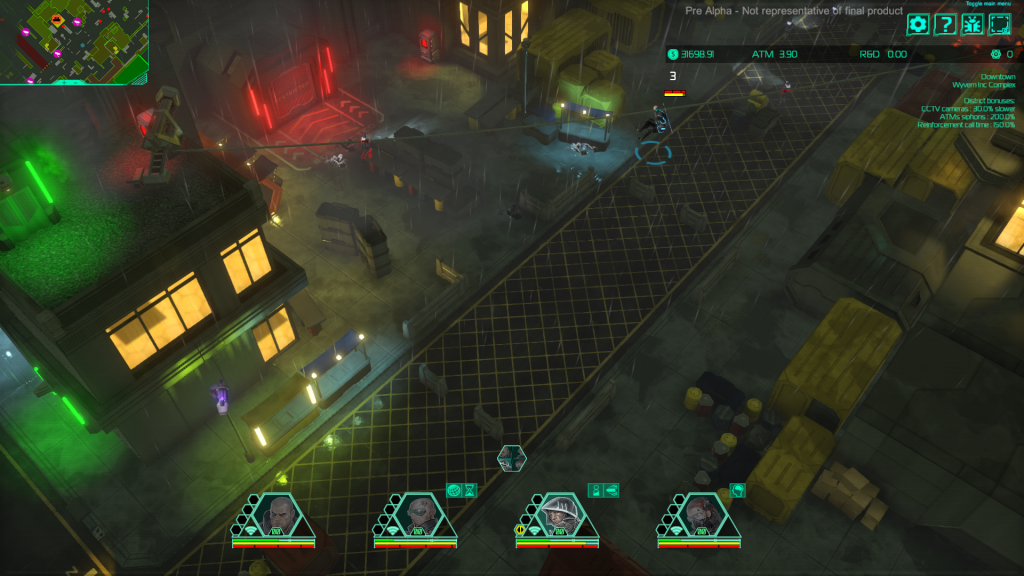 Zip-lining in under the cover of the city’s near-eternal darkness.

To expect Satellite Reign to have the same impact on me as those first moments with Syndicate back in the 90s would be absurdly unrealistic. This is a different time, under entirely different circumstances, and the game is, as advertised, in rather early stages of development.

That last point makes it difficult to outright recommend at $30.00 USD (or similar local currency,) because there isn’t yet enough of the game present. As of early January, you’re getting a mini cyberpunk sandbox with a rudimentary mission structure that, while interesting, is a little over-heavy on breaking into guarded compounds. It’s an extended gameplay demo with a lot of placeholders, some lovely sci-fi noir district details (with attendant optimisation issues) and strong hints at a Syndicate-styled open city with further Commandos-esque heists for your agents to undertake.

If that sounds like enough to be going on with, and you’re prepared to wait a fair while, Satellite Reign should only improve and expand over time. The game plays heavily to gloomy, dystopian future imagery, but the outcome forecast by this pre-Alpha build looks brighter than the rain-soaked streets would suggest. Just be aware that buying in to any Early Access title in these initial stages always carries an implicit risk.

By Cameron Woolsey9 hours ago
Previews