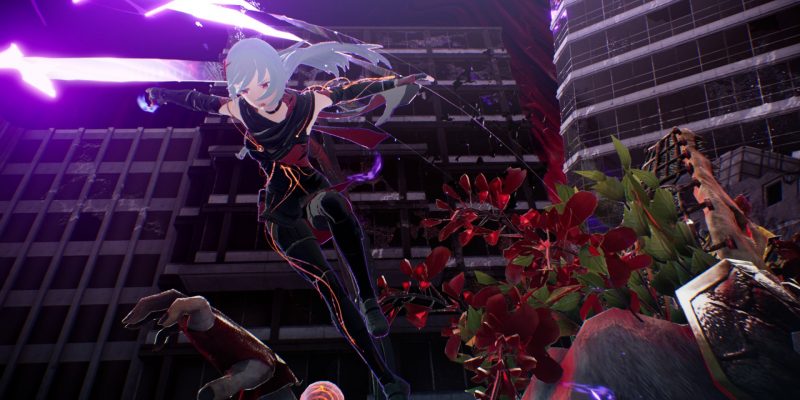 Scarlet Nexus, if you can’t tell via a cursory glance, is a game with a very strong manga/anime influence. Since you likely have eyes, you’ve almost certainly noticed this. As such, if you don’t like manga or anime, you probably won’t find the game particularly interesting. The game is billed as an action RPG and some of its key personnel were involved in past Tales games, but that doesn’t quite get across what the game is exactly. Instead of an action RPG, I’d call it part action game, part visual novel. The action is a bit simpler than I’d hoped, but it’s still entertaining and fairly unique in some respects.

The story is similarly enjoyable, with a decent-sized cast of characters and an interesting, if tropey, narrative. Together, they make for a game that’s worth playing for anyone who enjoys action games and manga-style stories. When Scarlet Nexus begins, you’re given the choice between two characters: Yuito and Kasane. Each of the two are cadets in the OSF, the Other Suppression Force. They’re a group of combatants that battles an inhuman menace known as Others, which feed on human brains. But this isn’t a struggle for survival sort of story like Attack on Titan or anything.

The Others are more of an obstacle than anything else, and the story focuses on whichever main character you pick, as well as their squadmates. As the plot develops, you’ll learn all about the history of this alternate world. There are consistent twists and turns as you learn new facets of the characters and the history of the world they inhabit. A lot of the individual elements can be a bit hokey, and some of the big reveals are either obvious or silly, but the story is effective and most of the characters are likable. Even the ones who appear to be regurgitations of tired archetypes. The game also contains one of the saddest scenes I can recall seeing in any game. 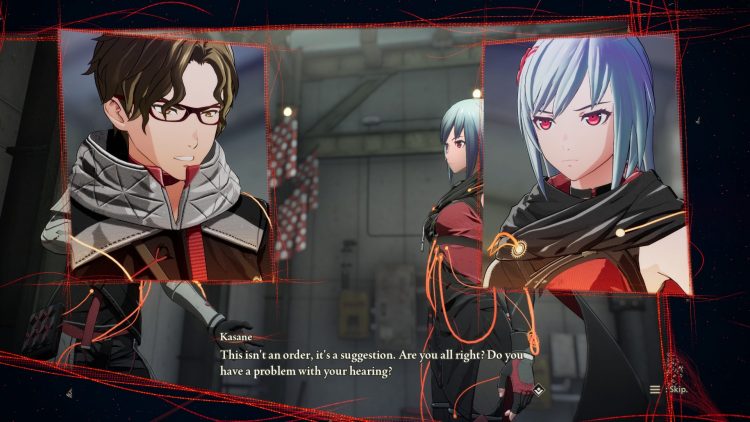 It’s important to note that Scarlet Nexus is very much a narrative-focused game. It’s not about spending hours on end fighting or doing repetitive quests; the plot drives everything. The game is divided into a series of story phases. Each of these gives you icons to navigate to in the game’s maps. You’ll either simply walk to them or travel to the area where they’re located. Once you reach these icons, a story sequence will kick off.

I wasn’t prepared for just how dialogue-heavy Scarlet Nexus actually is. There are some normal cutscenes, but they are relatively few. Instead, almost all of the game’s story is presented through visual novel-style sections where text appears over still frames. Character portraits will show up in front of these and flap their gums as well. If you’re not into the story, these sections will probably be too common for you, as there are a ton of them and they can go on for quite some time. That being said, the writing is more than up to snuff.

Story phases tend to have you go into levels that mostly see you fight your way from one end to another to get to the next icon. There are nooks and crannies to explore for resources while battling Others, but the paths are linear. Scarlet Nexus also has a large number of boss battles against both Others and human enemies alike. Jumping between story sequences, fighting through the levels, and the boss battles keep the pace moving so that it’s hard to get bored with what’s happening. 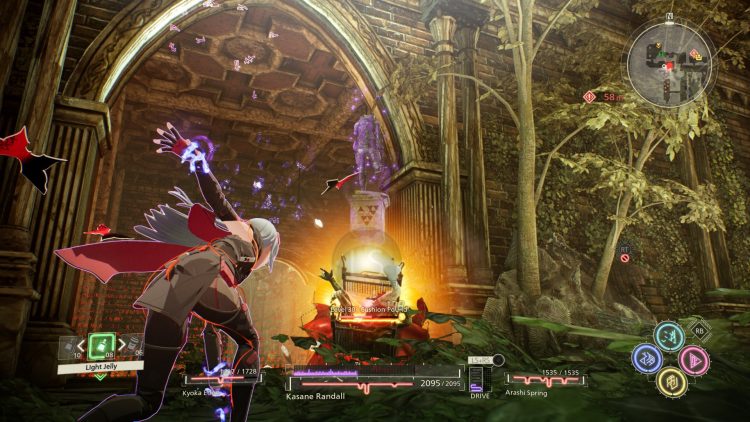 Time goes by so slowly

After you get through the story part of a phase, you’ll then return to your hideout for standby. This allows you to go back to previous areas to farm resources (which is purely optional) or level grind (wholly unnecessary). The standby phase is also where the game’s bond episodes are easiest to access. However, you can do some from the menu and others by returning to your hideout during the story phases otherwise. These are more visual novel sequences. Yuito and Kasane go through the same areas and fight the same Other bosses, but they have different squads and separate visual novel sequences entirely. The same is true for all of the bond episodes.

Bond episodes in Scarlet Nexus feature either Yuito or Kasane conversing with the game’s other characters. Doing these raises individual squad member bond levels, which grants them more abilities in combat. You can also give them gifts to raise their bond level. In a cute twist, squad members have their own little desk area in your hideout, which they’ll decorate with the gifts you give them. For the most part, the two characters have their own squads and are working the story from different angles, so playing either character will see you predominately interacting with one set of four over the others, although they still have some story presence.

Later on, both sides will consolidate and you’ll be able to take all of those additional squadmates into battle with you as well, so you’ll get to end up able to use everyone regardless of which character you picked. You can even freely switch between them from the menu when you’re out in a map. At the same point in the game, side quests become available, which is long after I expected to see them. They’re almost all predicated on killing X enemy in Y ways, often using character Z. You can get items through doing them, but you really don’t need to bother if you don’t feel like it. 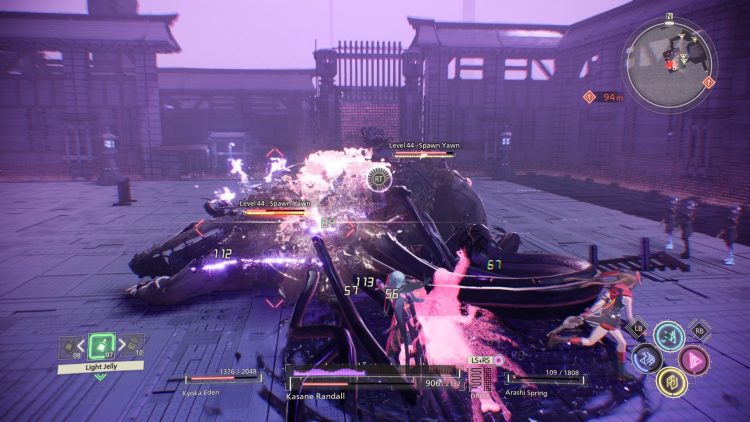 As for combat, it’s more or less reminiscent of a character action game. Yuito fights with a close-range sword, while Kasane fights at medium range with shuriken she controls with psychokinesis. These two characters are the only ones you can control directly and their movesets are limited. You gain skill points via leveling up that let you fill out your skill tree, but each weapon’s moveset only really gets an additional hit per combo string, so you’ll mostly be making use of the same basic combos the entire game. But you can launch enemies, use air attacks, a powerful stomp, a charge attack, and an air dash attack, so you still have plenty of control in regards to combat.

Adding on top of this, are Yuito and Kasane’s psychokinetic attacks. Areas are littered with objects that you can fling at enemies. There are also larger objects that require a quick-time event as you slam them into foes. These are especially kick-ass. Psychokinetic attacks also chain with weapon attacks, making for some satisfying combo potential. There are also two additional combat modes, one that activates automatically when a bar fills up and grants you extra attack and defense, and another that must be activated manually that summons an infinite number of items you can smash foes with. I don’t like how you have no control over when the former activates, however, as it often showed up when I didn’t need it or ended up wasted while moving between encounters.

What really makes the limited movesets more acceptable are your squadmates. You can fight alongside two of them at a time, but you don’t need to worry much about them, as they’re not all that useful and they aren’t all that good at staying alive. But you can have four squad powers on you at any one time. These operate on cooldowns and can be used individually or stacked on top of each other. More importantly, they greatly change up your tactical considerations. 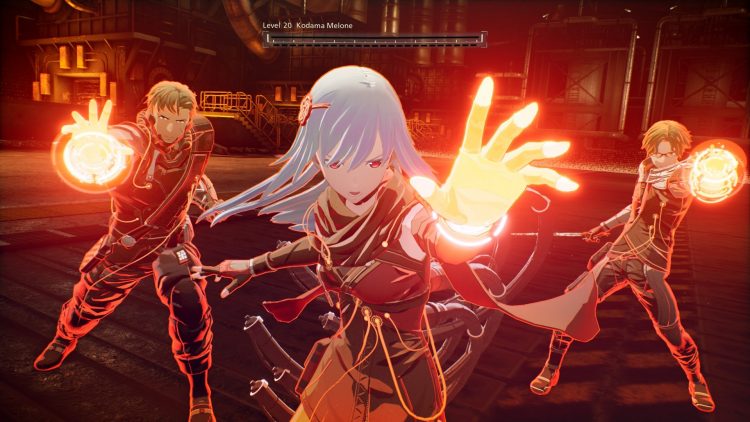 For instance, using Kyoka’s power will grant you a clone that fights alongside you, in addition to duplicating each psychokinetic item you throw. Arashi’s lets you slow down time, while Gemma’s makes you temporarily invulnerable. Mixing and matching these is fun, as are the powers that grant you a fire or electric buff that can put foes in a burned or shocked state. As you level up each character’s bond, they’ll do more and more for you, including having their gauges deplete slower, or showing up for a random assist. You can even summon them for an immediate attack by spending some of their gauge energy.

The only issue I have with combat in Scarlet Nexus is that the camera can be a bit iffy at times, plus the fact that some enemy attacks can be cheap. You’ll often be locked onto one foe, only for another to slam you with a projectile attack even if they were obscured by another enemy. Some attacks also do huge amounts of damage and can stunlock you, resulting in some cheap deaths. But you’re encouraged to have a ton of healing items, so you’ll be able to heal whenever you need to.

I really enjoy Scarlet Nexus. The combat isn’t the best I’ve seen, but it does what it does well, all while having some unique additions. The story can be silly and tropey, but I found myself engrossed more often than not. This PC port is also quite good, and it runs well on a mid-range card. I often had over 100 fps. If you roll your eyes at manga/anime-style video games, this one won’t change your mind. But this is a visually lovely, highly entertaining example of how narrative and action can do a good job of bolstering one another. 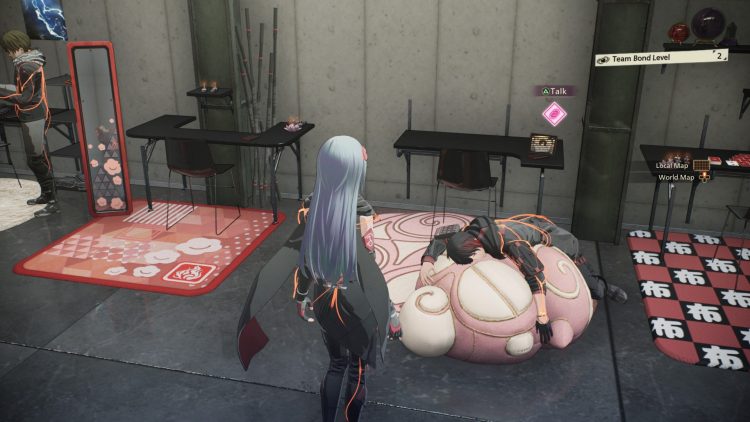 Filled to the brim with visual novel conversations and over-the-top action, Scarlet Nexus is a surprisingly endearing game that might be more linear than people expect, but more compelling than it probably needed to be.