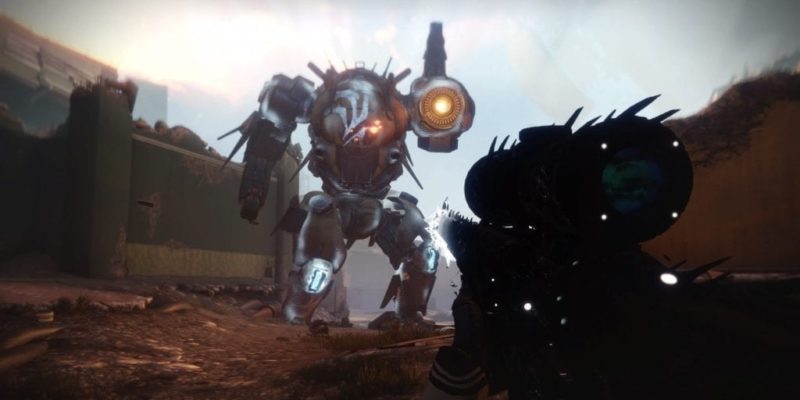 Well done, Guardian, you’ve reached the final encounter for Scourge of the Past. This one pits you against “Metal Gear” itself — Insurrection Prime. Looks like it’s time to prove that your Light is the weapon that can surpass Metal Gear.

The goal of this boss fight is to destroy Insurrection Prime’s shield panels and then use a tank to break its shield. It will open up its central core which allows for massive damage. This is also like a final test to see what you’ve learned from the entire raid. You’ve got the following mechanics to consider:

You should divide your team based on roles:

Your task is to stay in the spawn building and look at the map to direct your teammates. You’ll see the red triangle with a glowing circle which means it’s the Berserker that needs to get killed. Once a teammate has picked up the orb, you’ll see where that person needs to go. The same goes for the second player to pick up the second orb moments later.

The six buildings with the Berserkers are normally called:

The three pylons/tank spawn points (same as the ones used in the previous phase) are normally called:

Oh, and don’t forget that you’ll also need to contend with dregs and servitors that spawn near your area. Not to mention, snipers from rooftops might also snipe you. Even Insurrection Prime itself might target you every now and then.

As the Roamer, you can stay all the way at the northern edge of the map and hide behind some rocks. You can pick off most of the boss’ shield panels this way. Alternatively, you can also stay on the rooftops to get an even better line-of-sight.

Your job is mostly just to make sure that all of Insurrection Primes’ shield panels are down as soon as possible. This will allow the tank to eventually break its shield and stun it later on. You’ll also want to kill snipers that might be pestering your teammates.

Here are the shield panels you’ll need to destroy (you’ll know that all of them have been destroyed once Insurrection Prime loses its translucent glow):

Your other teammates such as your Map Caller and the Runner Team (that’s not designated to pick up an orb yet) should also help you in taking out the hard-to-spot shield panels given that Insurrection Prime turns in random directions often.

Finally, your team should be aware of Insurrection Prime’s attacks since they can be interrupted. He has explosive canisters/batteries that glow red depending on the attack. Destroying these interrupt the attack and slightly extend the timer before the wipe mechanic:

The Runners work like they did before during the City Encounter. They get directed to a specific building where a Berserker needs to get killed. It’ll drop the orbs needed to spawn the tanks. Remember to pick up one orb at a time so the player assigned to maps can make a clear callout where each person needs to go.

Once all four orbs have been planted, tanks will spawn in the plates that had two charges. If a runner is close by, just get on that tank and get ready to shoot the boss.

Important Note: Insurrection Prime moves around the map fairly often. The team needs to shoot the boss to lure it back to the center and ensure that it’s facing your spawn area. If it’s turned around, or you don’t have an angle, then you’re screwed out of a decent DPS phase.

If the boss is looking at the “spawn building,” then you can safely shoot it to stun. Otherwise, you’ll want to head out as a team to find a good spot. In any case, blasting it with the tank will cause it to get stunned and begin the DPS phase.

The DPS Phase: Snipers Go Pew Pew Or The Alphabet Of ACP

Once Insurrection Prime is stunned, it will show its core (like a servitor attached to its chest). Shooting it will allow you to do damage. Eventually, the boss will emit pulse waves and you’ll need to start moving. That’s because you’ll have to stand with a teammate with the matching buff. These are the three buffs you need to watch out for in the lower left corner of your HUD (we shorten them as A, C, and P):

That’s how the “ACP Strat” works — with the left side of your DPS area reserved for the Angular buff; the middle/back area for the Continuous buff; and the right side area for the Parallel buff. That also means players need to move around immediately once the pulses happen to maximize DPS.

For reference, I was at 638 PL when I killed the boss yesterday. This was my damage per Whisper of the Worm shot (with box breathing):

No doubt about it, you’ll definitely need to jump around to the correct spots to gain a massive DPS increase. Correctly using the ACP mechanic can mean the difference between a two-phase kill or one that might need three or four. It can even mean one-phasing the boss like this example from pro player Indica:

Once the DPS phase has ended, you’ll simply need to re-do all the steps as before. Keep calm, play it safe, and you’ll get your kill eventually, Guardian. As for me, I didn’t get any noteworthy rewards (besides an emblem) and the Threat Level shotgun. It’s like the Ikelos SG but for the primary slot. Too bad it’s not fully masterworked.

The idea here is to have two Warlocks on the left and right sides. They are your anchors and will not move from their spots unless there’s one unique instance (explained below). The entire team stays in the middle area.

The Warlocks will call out their buffs one at a time and the remaining players just move to those spots underneath their Well of Radiance. This ensures maximum uptime for a majority of players instead of everyone moving around to adjust.

The only exception to this rule is when both Warlocks have the same buff. One other designated player will just call out what buff they have and will move to the right side (along with anyone who matches their buff). Refer to the image below for two examples.

Doing the above guarantees that you’ll always have players who consistently DPS (with their Well of Radiance active) instead of everyone jumping around. In my previous runs, when the LFG teams struggled with “Regular ACP,” I introduced this “Static Warlocks” strat and everything went smoothly. It was possible for teams of 630s to take out 75 percent of Insurrection Prime’s health bar in one DPS phase without fail.

If all the above seems complicated, or you’ve already done this legit and you want to make things faster. You can always opt to cheese the boss fight by having one player blow themselves up while holding the Berserker’s orb. This starts the DPS phase immediately and you can wail away on the boss.

Whatever strategy you use, we hope this guide was able to help you out. We’ll keep updating it when we know more information and secrets.