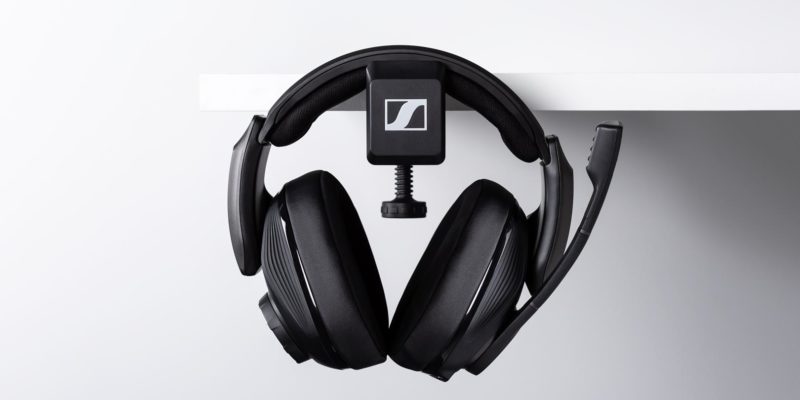 Even to those who only pay cursory attention to the audio world, Sennheiser is a renowned brand. Our own Steven Wong had a look at (well, a listen to) the comany’s GSP 370 headset at the end of last year, and now I’ve gotten my hands on its beefier, pricier brother: the EPOS Sennheiser GSP 670.

The GSP 670 is a wireless headset very definitely aimed at the gaming market. It’s got a Bluetooth connection, a microphone on a boom arm, and a low-latency USB dongle. And while it should work on any Bluetooth device, it’s heavily marketed towards PCs and PlayStation 4, with the Sennheiser Gaming Suite providing an extra set of tweakable options to get just the sound you want.

Out of the box 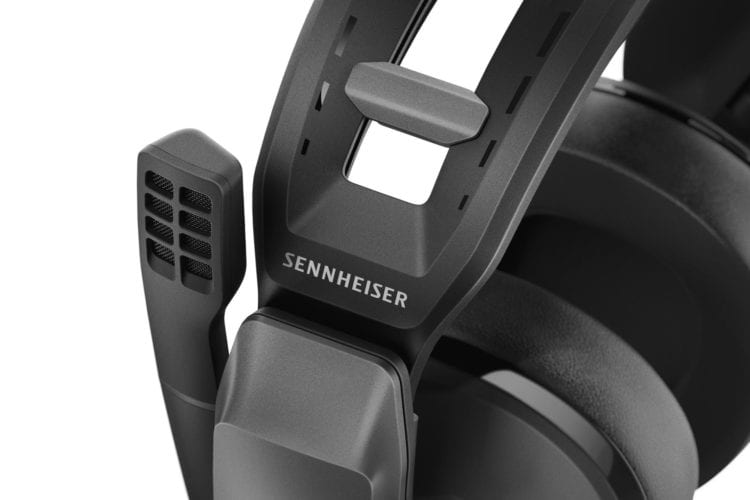 One of these sliders on each side of the headband allows you to change the distribution of pressure on to each ear, or to the top of the headset.

First things first: This is a hefty, well-built headset. “Hefty” isn’t just a vague description, either — this beast weighs around 400g, or just under a pound. And while it feels weighty on your head, that weight doesn’t tend to be too uncomfortable due to the ergonomics of the thing.

The GSP 670 has a pair of “contact pressure distribution control” sliders on top. This is effectively a fancy way of saying it has two sliders that adjust how much of that weight is on your ears as opposed to the top of the headband, so you can change the distribution to your comfort. You’re never going to forget it’s there, but the weight isn’t as much of a problem as it could be.

In fact, there’s not much I can fault about the design. It feels solid, which is always something I like with a headset: There’s nothing flimsy or lightweight about this thing. About the only complaint I have is the boom mic, which sticks out a bit from the sleek design. Compared to the rest of it, it feels a bit like someone glued a piece of thin plastic to the side of a carefully engineered headset. It sticks out from the profile a lot more than, say, the considerably cheaper Atlas Three. I could complain about some mild discomfort after a few hours, but the truth is that I find basically every headset uncomfortable after a short period. I can only assume I have a weird-shaped head. 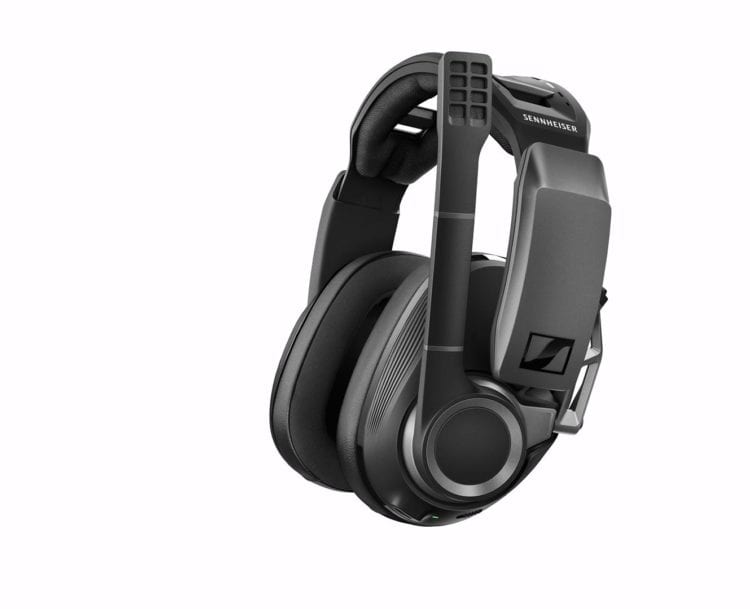 The mic sticks out from the design more than I’d like, even in the closed position.

The mic itself is probably the single weakest point of the product. It’s not bad, per se – it’s fine for Discord chats or in-game communications – but it’s not particularly crisp or high-quality. For a product this pricey, I’d hoped for something a little better. But if you’re buying the GSP 670, you’re probably not doing so for the mic. You’re doing it for the sound, and here you’re unlikely to be disappointed.

The headset sits comfortably over the ears thanks to its deep cups, and while it doesn’t have active noise-canceling, the closed-back design and thick leatherette earpads do an excellent job of isolating you from external sounds. With the headset on and some sound playing through it, you’re not going to hear anything but the loudest background noise.

And oh, the audio is glorious. The EPOS Sennheiser GSP 670 offers up a deliciously rich sound that’s suitable for pretty much everything, especially for a closed-back headset. Unless you’re a serious audiophile, I suspect you’ll have difficulty finding fault with these.

The sound of no silence 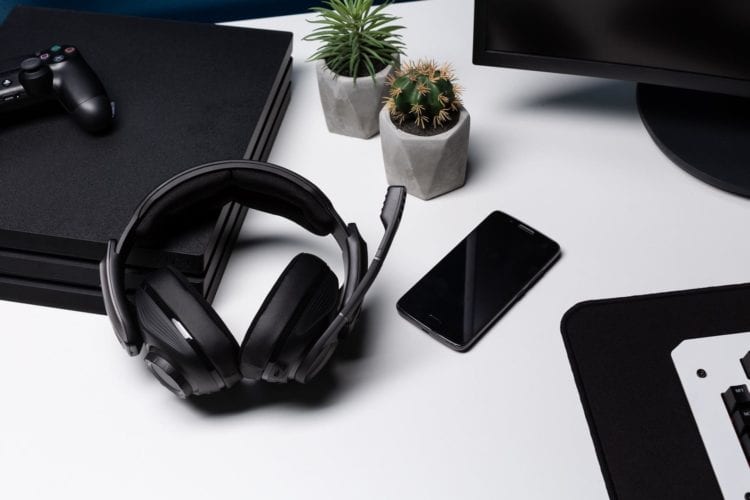 The GSP 670 is a chunky beast, but I rather like its design. Not something I’d wear in public, though.

The headset itself is capable of a lot without any sort of clipping or peaking, even at the highest volumes I can tolerate, and even after tooling around with the equalizer. There are four presets built in: Flat, Movie, Music, and Esport (Treble). You can customize these and create your own with the Sennheiser Gaming Suite, as well as swap between two-channel and 7.1 audio. While I’ve fiddled with the equalizer a little – particularly to boost mid-range audio, as the presets err towards more bass and treble – it’s not a necessary step. For most purposes, the presets do just fine.

The Music preset, as you’d expect, is excellent for music: It’s well-balanced and does a good job of highlighting pretty much every instrument, even in the more nuanced of tracks. I favor Movie for single-player games, especially the more cinematic ones. Control, in particular, sounded utterly superb with this preset. The mumbled chants of the Hiss were crystal clear, ambient creaks and clanks had me completely on edge, and gunshots were like a crack to the ear.

The Esport mode deserves further discussion. For general gaming, I wouldn’t use this much – it’s very, very focused on the treble, and so things don’t sound nearly as broad or rich. But I’ve found it absolutely bloody superb for competitive shooters. In Apex Legends, hostile footsteps were startlingly clear, and I was usually hearing them before the rest of my nearby teammates. The 7.1 directional audio is equally excellent in this mode; I could hear when things were above or behind with perfect clarity.

To put it bluntly: I have zero complaints about the sound quality. It’s as good as I’d hope for from something with Sennheiser in the name. Battery life is equally decent so far; the specifications reckon about 16-20 hours, depending on whether you’re using Bluetooth or the low-latency dongle, and that sounds about right. The micro-USB port makes it a snap to charge, and it charges quickly, too. Unfortunately, I can’t comment about how that battery life will degrade over time.

All the buttons and dials you need 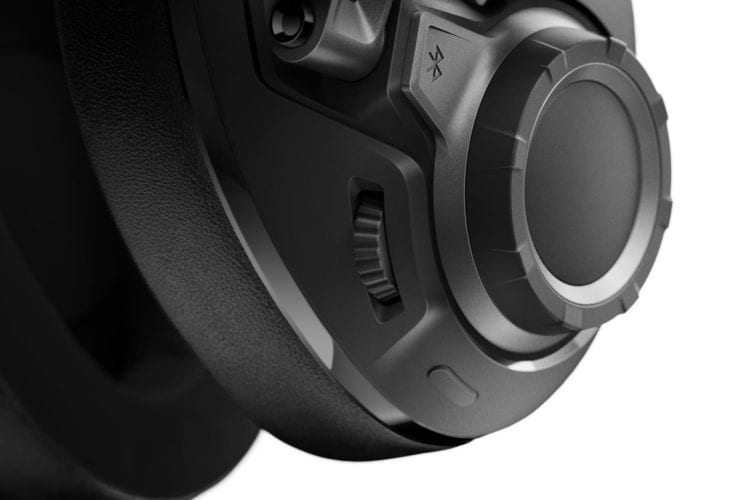 The right side of the headset offers a giant volume knob, a smaller volume control for incoming voice chat, and a smart button for switching presets.

One of Steven’s complaints with the GSP 370 was that the unit itself didn’t have much in the way of options or extra buttons, but this isn’t a complaint that can be leveled at the GSP 670. The basic on-off stuff is automated: Turning up the sizable volume knob switches the headset on, and lowering the boom mic activates that.

There’s also a smart button that can be set up either to flick between your presets or to toggle between 2.0 and 7.1 sound. I found it best to use this to swap between presets rather than having to go into the Gaming Suite to do it (and those presets have their own defaults for 2.0 and 7.1 anyway), but hey, your choice. Finally, there’s a little switch that’ll vocally tell you how much battery life is remaining.

But there’s one other neat little feature I haven’t mentioned: The GSP 670 actually has two input channels and two volume dials. The reasoning for this is that you can set up your voice chat – Discord, say – to send voice through one of these, while your game is on the other. With this, you can adjust voice and game volume separately.

The downside, of course, is that inevitably everyone has their mic volumes set differently. It’s a useful feature for sure, especially when you need to quieten your teammates to focus on a game, but you’re still going to have to adjust people manually to level them out.

GSP 670: The price of excellence 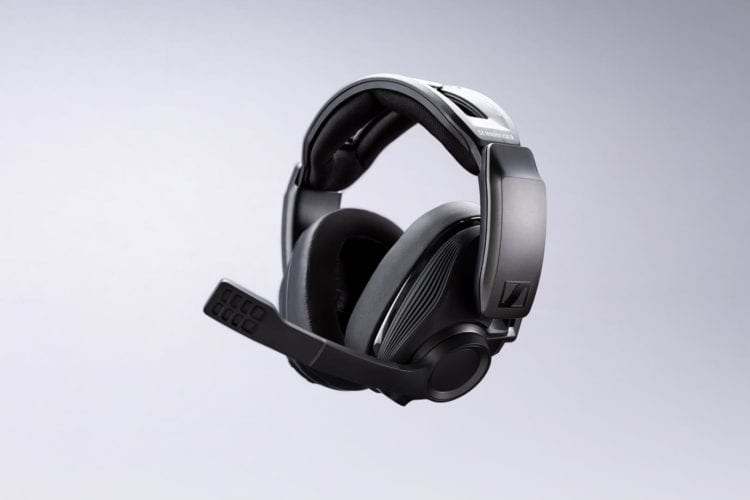 So, complaints? Well, as previously mentioned, there’s the mic – it’s not great quality and it sticks out a bit from the headset itself. There’s also an auto-sleep function that doesn’t quite work for me. Even after disabling this, the GSP 670 seems to turn itself off after not getting any audio input for a short period. As it takes a second or two to turn itself back on when it detects audio, this can mean missing initial audio if you’re finding a new YouTube video to watch. Finally, and most crucially, there’s the price.

This isn’t the most expensive gaming headset I’ve seen, but the $350 price point definitely puts it near the top end. Whether or not that price is worth it is, really, on your budget for a headset. You can get some solid headphones for cheaper, but there aren’t many that can come close to the audio quality offered here. The audio here is so good I can’t see myself moving away from the GSP 670 for quite some time, but I can’t fault anyone who’d prefer to opt for a mild decrease in sound quality in exchange for saving themselves $100 or more.

Nonetheless, if money isn’t a problem or you want one of the finest gaming-specific headsets on the market – wireless or not – the EPOS Sennheiser GSP 670 is a very, very solid investment.

While it's easily one of the more expensive gaming headsets on the market, the Sennheiser GSP 670 provides almost unparalleled audio quality.