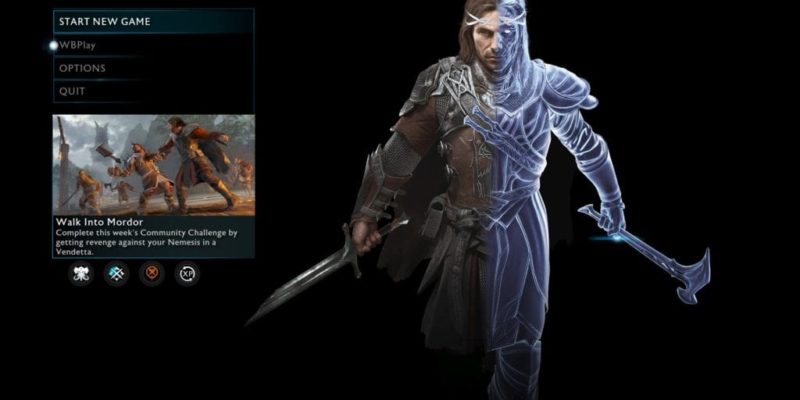 I’ll be putting together a more expansive PC Tech Review (Update: see that here now) for Shadow of War in the near future, but for now here’s a look at all the lovely graphics menus. PC Invasion only received a code for this game this morning, so most of the time prior to taking these screenshots was spent downloading the minimum 66GB of data required.

There’s another 30GB of optional data to grab if you want 4K textures and 4K cinematics, but since I’m running a PC with a 4GB 380X card in it (a GPU not noted for its 4K performance), I’ve held off on that. Keep that in mind though.

I’ll go through the menus as they’re presented chronologically in the game, starting with ‘Settings’. That mostly relates to which bits of the Shadow of Mordor you’d like to leave on or switch off. Lots of customisation here, which is always nice to see. Note that you can click any of the images in this piece to make them larger. 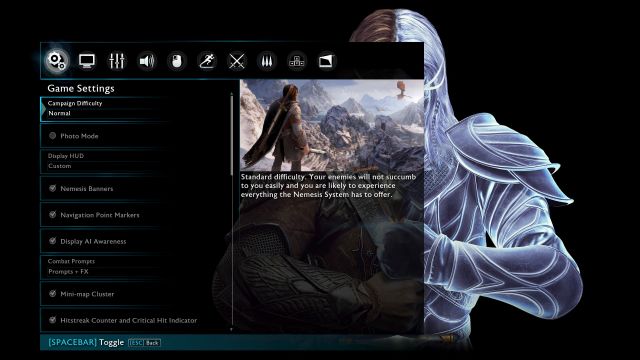 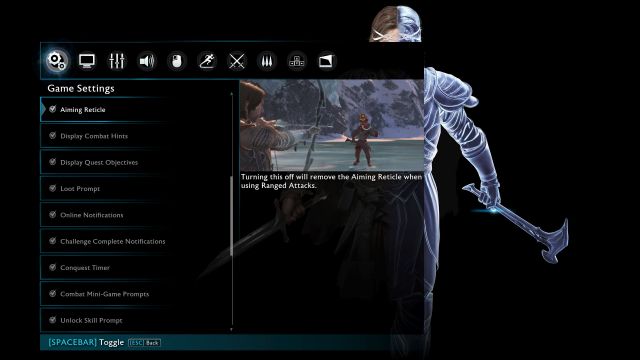 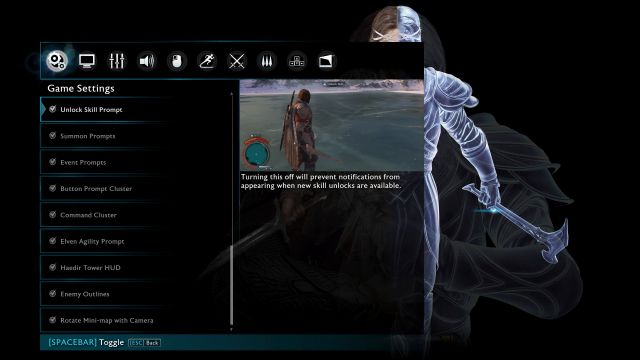 A lot of great stuff to toggle here, like whether enemies display counter-attack prompts over their heads (with or without specific button prompts, or not at all). Shadow of War also displays an image of the UI aspect it’s talking about next to each option, so you can see exactly what a scene looks like with it on or off.

After Settings, it’s ‘Display’. This is where you’ll find resolution options, frame-rate caps, and the like. 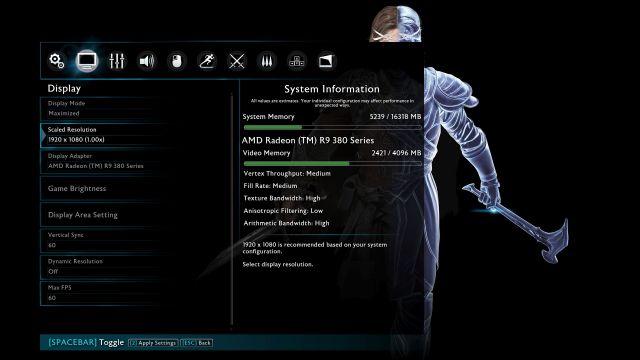 The resolution options go all the way up to 8K (my god …), and you can effectively downsample from within the game itself if you wish, and, say, try to run 4K resolution on your 1080p monitor. Obviously you’d want the 4K texture pack to take full advantage of that, as well as a powerful enough GPU.

Vsync can be set to 60, 30 or off. The FPS cap options are pretty wild, allowing all kinds of arbitrary amounts like 36 or 80. It tops out at 240. You can also turn this off if you want. The game can be run in Fullscreen, Borderless Window, Windowed, or ‘Maximized’. On now, then, to Shadow of War’s more Advanced Graphics Options. 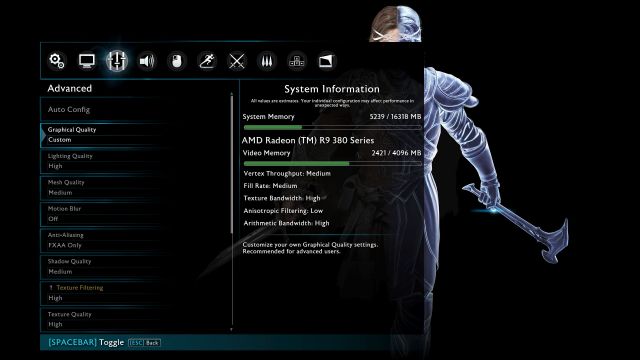 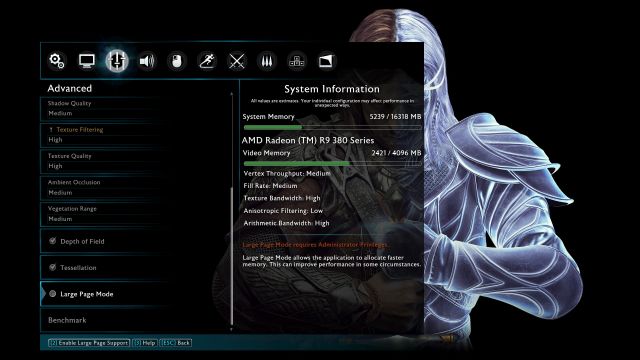 I’ll need to do further testing here, but the game defaulted to what seem like pretty smart settings for my hardware (i5-6600 / 16GB RAM / 380X). Except the Anisotropic Filtering, which it wanted to limit to 2x for some reason. I’m used to AF being pretty light in terms of hardware demands, so unless Shadow of War is an exception there I’ll be banging that up to at least 8x.

There’s a good breadth of options here. Anti-aliasing is a bit light (off, FXAA, or TAA are your choices there), but it’s a reasonable spread overall. Motion blur can be turned off. The ‘Large Page Mode’ toggle looks intriguing too; it says it allows the application (ie; Shadow of Mordor) to allocate faster memory. I’ll be giving that a go.

The in-game benchmark runs through a few in-game scenes, ending with a fairly intense fortress assault scene. Here’s what the post-bench results look like for my (as yet mostly untweaked) options. It gives the lowest frame-rate as 30, but I think it was only at that level while loading in the benchmark. 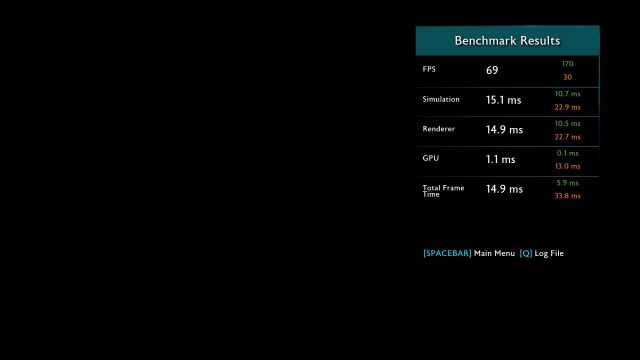 Again, I’ll have a better idea how the game runs on a 380X after a bit more testing. Look out for the PC Tech Review for more in that area. We still have some menus to get through here, with the next one being Sound. 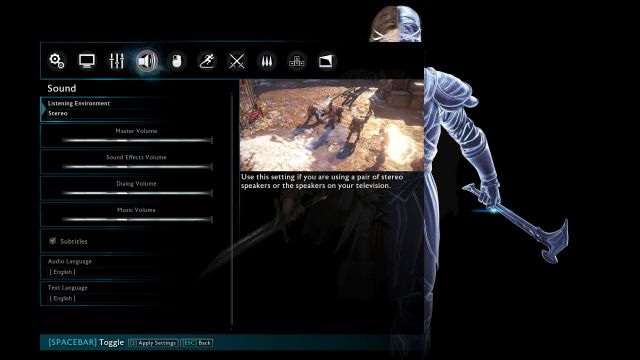 Pretty self-explanatory, this one. You can alter the ‘Listening Environment’ to Surround, Headphones, or Stereo, which presumably alters the dynamic range accordingly. Subtitles can be toggled here, as can the audio and text languages for the game. Plenty to choose from if you’re not an English speaker. Next; mouse and keyboard settings, and control binds. 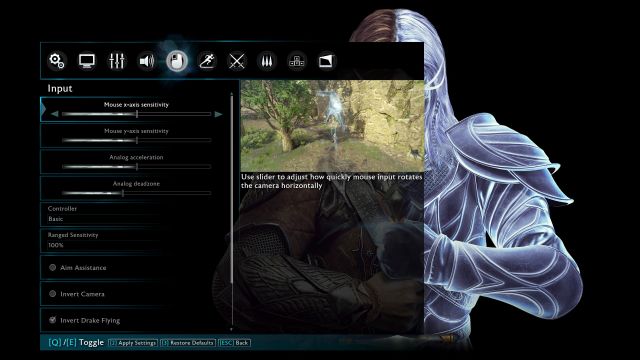 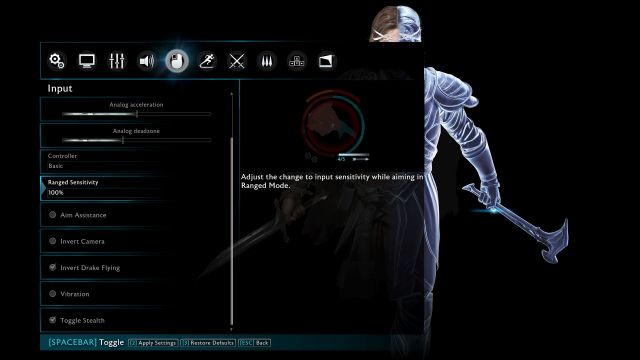 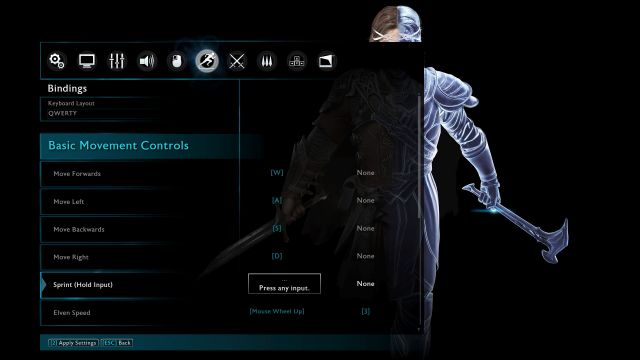 I’ve merged a couple together here. ‘Input’ deals with mouse (or controller) sensitivity, aim assistance, camera inversion and the like, while ‘Bindings’ (as you may guess) is all about rebinding the input keys. Helpfully, when you do the latter, it also tells you what other input actions you’re changing by moving (say) ‘Sprint’ off the space bar.

This does mean that some bindings are inextricably linked, however. You can’t move Sprint away from space, but leave it another, connected, action (like Dodge Roll), for example. Shadow of War will automatically switch on-the-fly between controller and keyboard prompts, depending on which device you touched last. You can’t alter the controller inputs, as far as I can tell.

The other menus are further keybinding screens, for combat and Caragor riding. The final one is for the Credits and checking network status.

VR Awards winners include the Oculus Rift and Raw Data