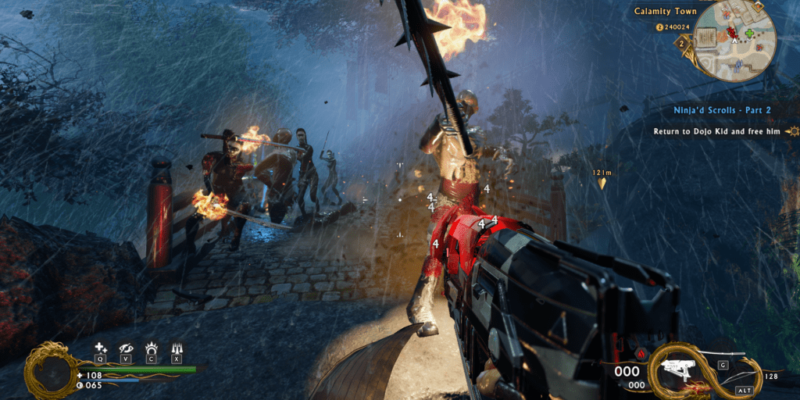 Flying Wild Hog are still furiously polishing their Wang, resulting in a brand new patch for Shadow Warrior 2 (1.1.4.0) being released today. Further balance, engine fixes, and multiplayer fixes are the main order of business with this one.

Finishing missions for a second time will no longer reward Skill Points, but instead give Wang some ‘Orbs of Masamune’. These are in preparation for a forthcoming set of “violent challenges” for Shadow Warrior 2. People who complete said challenges will be able to “imbue Smith’s Anvil with power to greatly improve weapon stats”. You’ll need the Orbs of Masamune to do so.

– Removed gained experience cap (on all difficulties)
– Added a significant bonus for experience gained on difficulties higher than normal
– Slightly decreased large and special enemies’ HP on difficulties higher than normal
– Added negative stats cap for high level upgrades
– The number of auras for a single enemy is capped to 1 on difficulties below ‘Insane tier 2’
– Base physical resist lowered. This change affects all difficulty levels
– After finishing missions for the second time, instead of Skill Points the player now receives a powerful new currency called ‘Orbs of Masamune’. The number of Orbs depends on the difficulty level. A new set of violent challenges will be added to the game soon. Players finishing these challenges will be able to imbue Smith’s Anvil with power to greatly improve weapon stats. Orbs of Masamune will play crucial role in this proccess.
– Crafting option is now available always after a player unlocks it in the first playthrough
– Items in shops unlocked by story progress are now available always after a player unlocks them on the first playthrough

– Fixed the shop menu not being closed when client is teleported to a boss fight
– Ancestral Ties: Fixed panic room door not being destroyed after cutscene
– Ancestral Ties: Fixed Heika being stuck in one pose after a client joined the game
– Fixed portal visibility before defeating the first boss
– Minimap chest icons will not disappear when the host opens them
– Fixed performance issue for co-op partners

Early Reviews Are Vital For Healthy Criticism, and Bethesda Know It