How do you put a twist on the ARPG genre and keep the gameplay familiar and fun? It’s not an easy question to answer, but Game Farm is going to attempt to do just that with Shadows: Heretic Kingdoms which is currently in Early Access on Steam.

This is a game about possessing a dead hero’s body and then playing as both a mortal and ghostly apparition called the Devourer. It potentially sounds a bit mad but, since we’re not exactly adverse to the unusual in gaming, it might just work. Even if it messes with your natural ARPG clicky instincts. 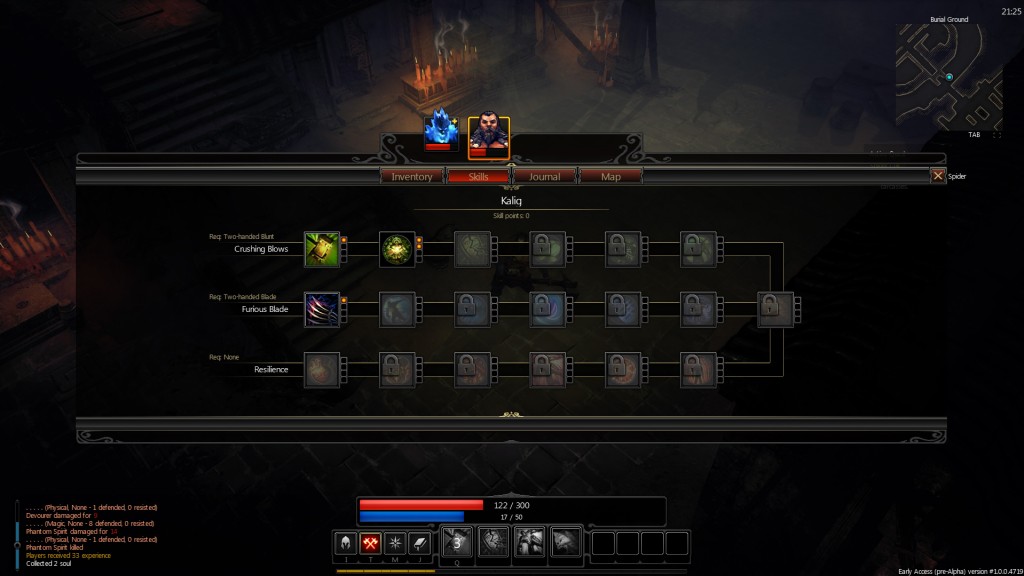 The game is set a few years after the events of Kult: Heretic Kingdoms, but though I’m sure I’ve played that game, to be honest with you I can’t really remember anything about it. No matter, let’s plough on.

When the game begins you start as the Devourer in an ethereal underworld. The first goal is to fight the other ghosts and make your way to a selection of coffins containing fallen heroes. That’s a cue to choose which mortal form to play as, and right now there’s the good old traditional selection of Warrior, Ranger and Mage. It’s here you’re also introduces to the “Hooded Man,” or Tom Baker if you’re an older Doctor Who fan.

For the purpose of this preview I decided the best way to learn the ins and outs was to choose the obligatory warrior melee class, which in this game is a Barbarian. This is not the light on his feet Barbarian you may be used to in Diablo 3, he’s a stocky lumbering chap who packs a mighty punch. He’s so stocky in fact you feel that he can barely lumber his way around the level.

The early periods of the game are designed to drum into your head the concept that a level is not just a single level but actually two levels. The difference between Shadows: Heretic Kingdoms and other ARPGs is that each level can be viewed and played as both the Devourer and the Mortal hero, with the player able to switch between the two forms at the click of a key. 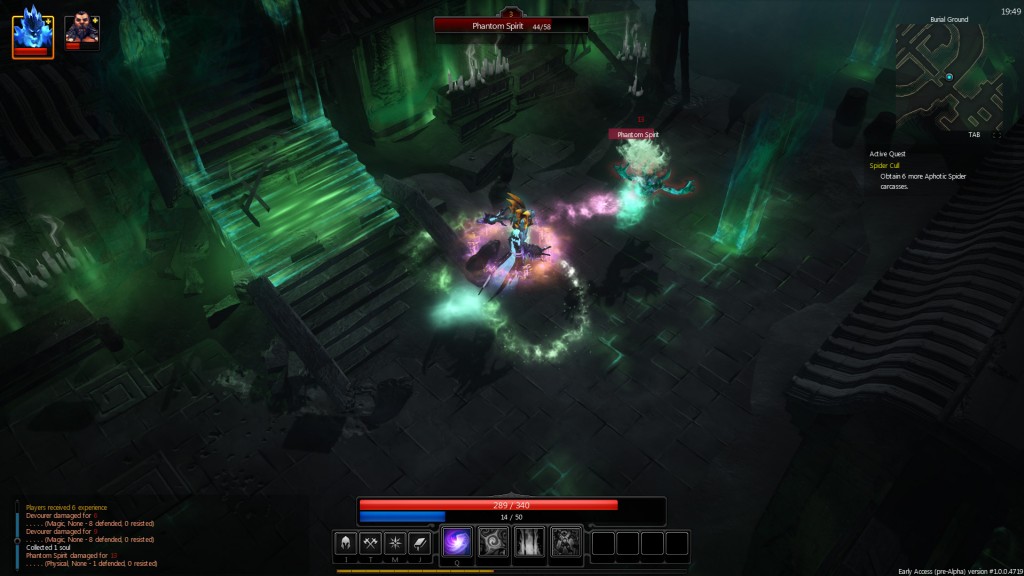 This is actually quite clever, because the developers have designed the levels in such a way that you absolutely have to switch forms to progress. For example, there may be a collapsed bridge or broken staircase which you can’t pass in mortal form. But by switching to the Devourer you can glide over the gaps.

Switching between forms also means that the level you a see as a mortal, which is packed with nasty mobs, will not have the same mobs visible if you switch back to the Devourer. At any given point in the game there are effectively two separate experiences, and knowing when to use which form is all part of the learning experience. It takes some getting used to.

There’s also an indication that this dual game world gives players options when it comes to quests. Early in game in the town of Thole an NPC asks if you can dispose of his wife’s body after he’s brutally murdered her. You see this murderous NPC in mortal form but if you switch to the Devourer you see the ghost of his murdered wife who asks the you to do the right thing and report the murder to the guards. Either you take her body away to the burial grounds or have him arrested by the guards. This is a nice touch because it potentially offers different quest branches for players to discover and encourages you to really explore the levels in both forms.

Combat is a key element of any ARPG but Shadows: Heretic Kingdoms currently packs little punch and is incredibly fiddly on some skills. Game Farm has opted for a “click and then select target area” mechanic on AOE spells, which is really frustrating. It’s similar to Crate Entertainment’s approach in early builds of Grim Dawn, which they subsequently changed to a single click. More like Diablo’s, in other words. I certainly hope the Heretic Kingdoms developers change this to make the combat more fluid in later Early Access versions.

There’s no doubt there’s still a lot of work to be done on the combat mechanics, because at the moment targeting enemies feels unresponsive and cumbersome. This will hopefully improve as more skills become available to the classes currently in this early version.

Moving around is the world is simple enough, but I would say the movement speed needs to be ramped up. Playing as the warrior barbarian feels sluggish, and while he’s larger than the Ranger and would naturally move slower, it currently just feels wrong. Again, all of this may well be subject to future tweaks and changes. Such is the way in Early Access.

When it comes to the health resource, Heretic Kingdoms does something a little different. Killing an enemy causes his soul to swirl towards you and, if touched, this increases your bottom blue bar. The red health bar drops as you take damage, but can be boosted by taking the energy from the blue bar. This means that in order to stay alive you have capture more slain enemy souls and keep that blue bar topped up.

In theory this works well, but it can become problematic. If one of your forms dies he can be resurrected if you have enough energy in the blue bar. The only way to boost the bar is to kill more enemies, but if you’ve cleared an area out there’s nothing left to kill so you can’t get enough energy to resurrect. This means that areas inaccessible to the mortal or the Devourer form may no longer be reachable, preventing progress.

There have been a few times where I’ve had to resort to loading a previous save due to the above problem, so here’s a word of advice: save often, because there’s no easy way to get back to where you were and you can lose a lot of progress. Hopefully a better save/waypoint mechanic will be added in due course.

If there’s one thing you can’t fault about the game so far, it’s the visuals. The locations are superb, and the world feels both full of life and at the same time downtrodden and gritty. The first town location of Thole is a joy to wander around with its ramshackle huts and streets. The detail on all the game world objects and characters is also fantastic, pulling you in to the whole experience. It’s a big thumbs-up for the art guys.

Shadows: Heretic Kingdoms has so much potential to be a great ARPG thanks to the dual nature of the gameplay. There’s no word on multiplayer right now, but we’re guessing that if enough gamers join the Early Access it could be put firmly on the table. Having a co-operative game where there are actually two different versions of a level could be very interesting too. Players could hop between the two worlds together or tackle them individually at the same time as each other.

The title is showing promise, it introduces some interesting ideas to the often rigid ARPG genre, and, despite it’s current flaws, it could be one to watch. It’s also got a bit of Tom Baker which is always a plus.

Update: Since concluding this preview, Game Farm has announced the game will now be released in two part and you can read more about that in the news.

By Logan Broadley13 hours ago
Previews