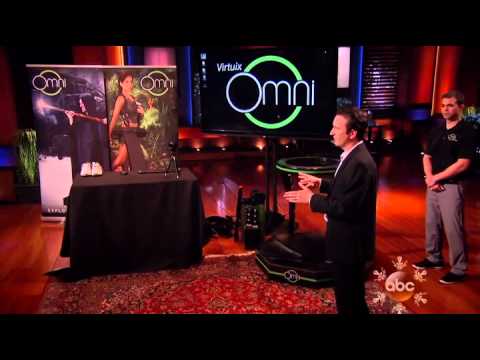 UK TV viewers will be aware of the Dragon’s Den and in the US they have a similar show called Shark Tank. Product designers and inventors pitch their products to successful entrepreneurs in the hope they’ll part with cash and invest. This time the Virtuix Omni took to the stage.

Lo0king for a whopping $2 million for a 10% stake in the company, which was an astronomical sum to look for on a show like this.  The ‘sharks’ didn’t go for it citing a stack of reasons that would make it a bad  investment.

According to the ‘sharks’, gamers “usually have a side job as a plus sized model” which was an odd point to make. This unfortunately led them to ask whether the Virtuix Omni would also be sold as a way for gamers to exercise. Some stereotypes sadly never seem to die.

Competition and price were also an issue, the fact that the Oculus Rift and other peripherals are required bumps up the price, and in a few years time technology will have already surpassed what the Omni can do now with increased competition in the marketplace.

The bottom line, according to the “sharks”, is that it’s an interesting IP that’s way overpriced. The price of $499.00 was said to be “cheaper than I would have thought” when the price was initially revealed at the start of the segment so we have to assume they mean the pricing of all  the gear needed for the best VR experience is just too expensive.

There’s no doubt that the Omni and the Cyberlith devices are great inventions but it still remains to be seen whether VR will go mass market.

Back in the 90s we all thought we’d be playing games in VR when products such as the VFX-1 hit the market. Poor visual technology leading to motion sickness, the availability of compatible games and pricing were an issue back then. Annoyingly some of these problems still persist.

So much relies on the success of the Rift at this stage that jumping in with huge investments on peripheral products would be extremely risky.

Frostivus coming to DOTA 2 – It’s not cancelled this year

GTA V Is To Get ‘Substantial’ Single-Player DLC In 2014, Rockstar Games Confirms