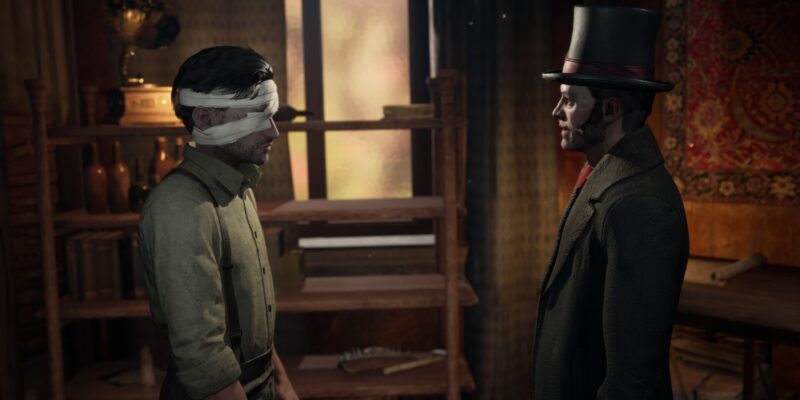 Saints and Sinners is a DLC quest in Sherlock Holmes Chapter One. In it, you’ll have to solve the murder of a priest. Mind you, it’s a fairly short investigation and, as such, you probably don’t want to purchase it separately (you’re better off getting the Season Pass if you want). In any case, here’s our Sherlock Holmes Chapter One guide to help you with the Saints and Sinners DLC.

How to complete Saints and Sinners in Sherlock Holmes Chapter One

To gain access to Saints and Sinners in Sherlock Holmes Chapter One, you’ll need to finish the entirety of A Gilded Cage. You then need to eavesdrop on NPCs in Miner’s End (nothing specific). In my experience, I simply found a couple of dudes who were talking along Carpenter Street. Choose the following: 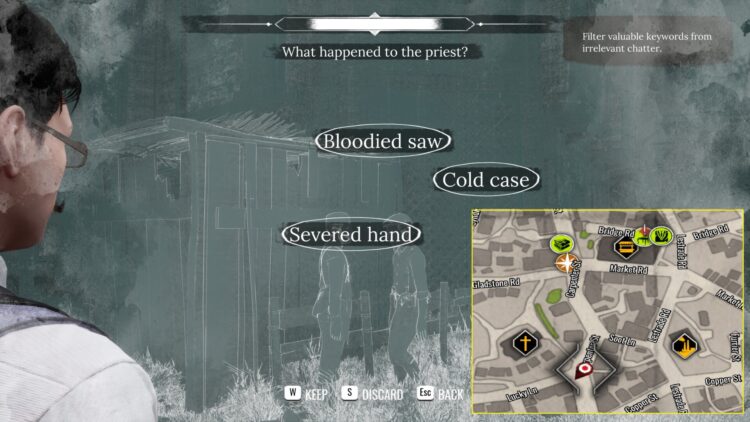 Next, go to Cordona Police Station and input the following in the archives: 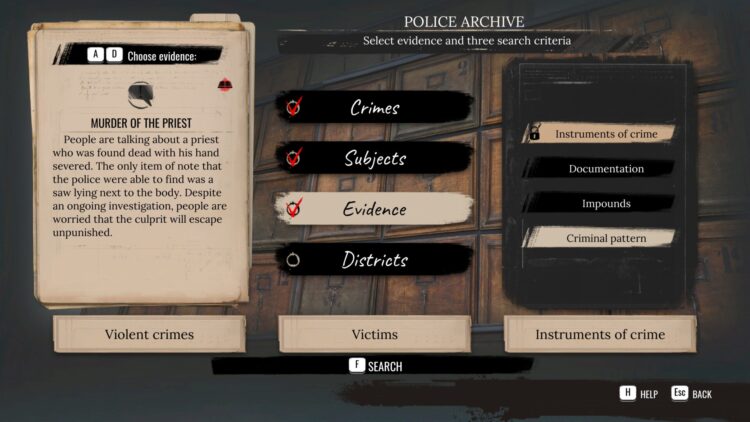 You’ll learn of the Righteous Gang, a group that’s operating in Miner’s End. Due to the nature of the investigation, you’ll want to wear disguises that will boost Sherlock’s reputation with criminals (i.e., the bottommost icon on the wardrobe panel).

Talk to certain shady-looking individuals in Miner’s End (i.e., thugs and even kids), and they’ll tell you of the hideout. It’s located in a yard in the southern section of Carpenter Street. Go up the wooden stairs and enter the doorway to enter the Righteous Hideout. 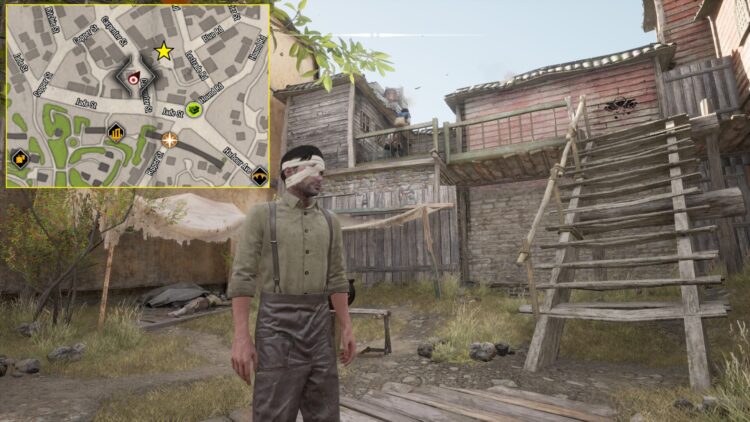 Once inside, you can complete Labouring for Breath, a quick task from Jon. Examine the man who seems to have trouble breathing (he’s got asthma). Check the nearby house to find a long table with several clues.

The ones that you need, though, are on a desk with a few bottles and medicines. After picking up the ether, return to the asthmatic man to help him out. 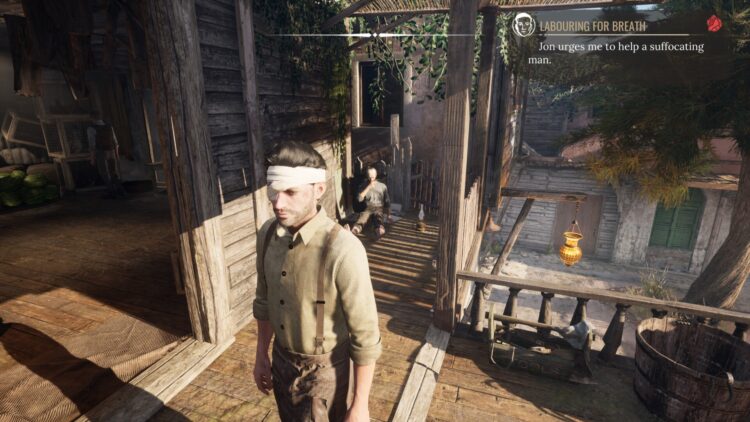 Next, go to the far end of the wooden walkway. Eavesdrop on the two men and pick:

Talk to the guard in front of the door and tell him that you want to join. Then, move to the nearby area and shoot the bottles with Sherlock’s pistol. 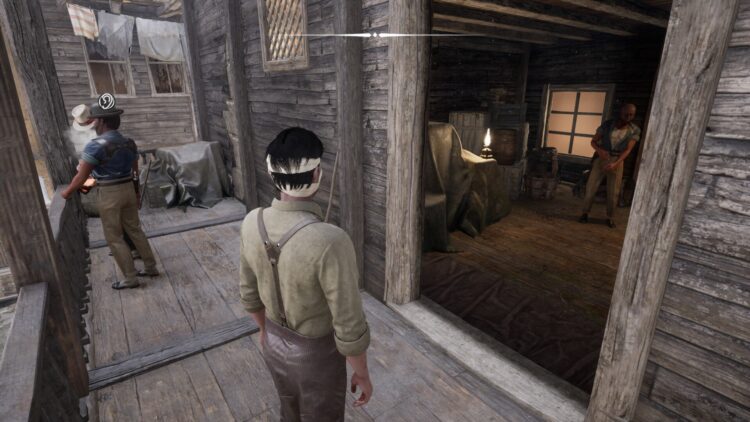 You’ll then be allowed to enter the room of the Righteous Gang’s head honcho. If you want, you can decide to take matters into your own hands. This will let you kill or arrest the thugs.

If you want to arrest them, make sure you shoot their armor platings first. For those who aren’t armored, shoot the objects that can cause them to get stunned. 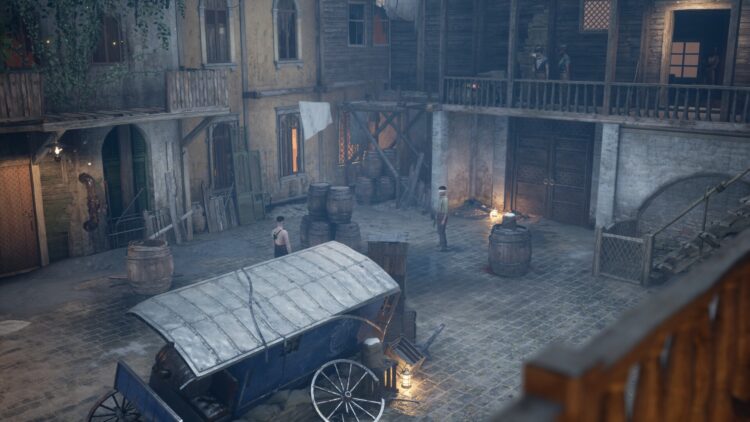 When you’re finished, the Righteous Gang’s boss will thank you for your help. Exit the hideout to complete the Saints and Sinners in Sherlock Holmes Chapter One. You’ll receive a couple of rewards, including the Casual Detective Outfit for Sherlock and the Clergy Jon Outfit for your trusty companion. 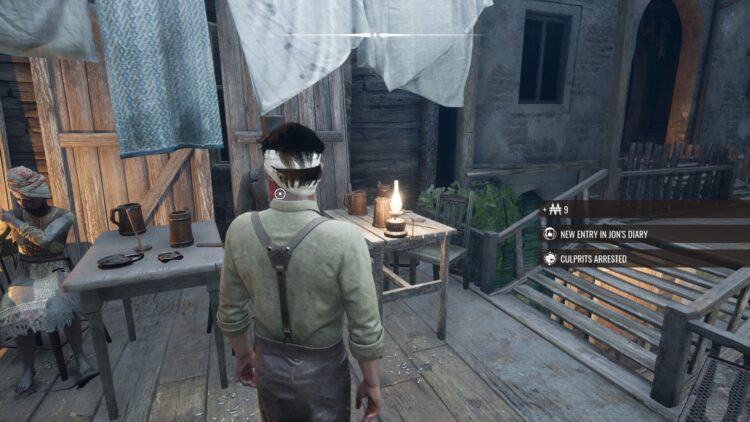 Sherlock Holmes Chapter One is available via Steam. Beyond a Joke is available as a separate purchase or as part of the Season Pass. For more information, check out our guides and features hub.

Sherlock Holmes Chapter One — Beyond a Joke guide