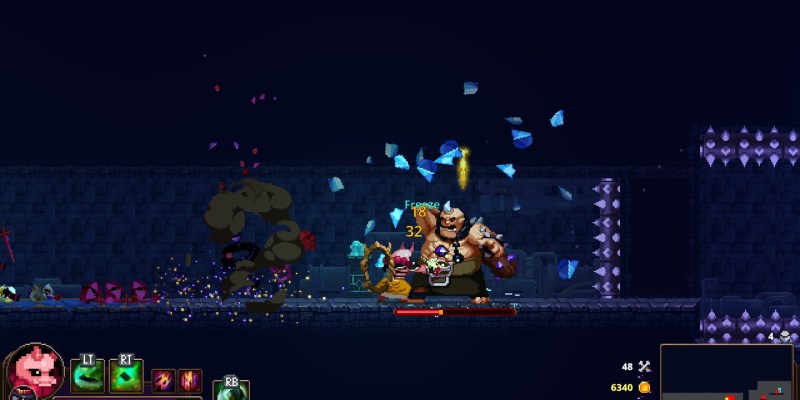 Say what you will about action rogue-lites, but they’re clearly here to stay. Fighting your way through perilous encounters while acquiring random power-ups with various builds can make for highly-compelling gameplay. Most games in the subgenre follow suit and don’t innovate much or successfully achieve their own identity. Skul: The Hero Slayer is one of the few to actually accomplish these via excellent pixel artwork, tight gameplay, varied builds, and a steep level of challenge. Its narrative can be generic and it can get old in some respects with a surprising degree of quickness, but it’s hard to not be impressed by its accomplishments.

Skul: The Hero Slayer tells the story of a small skeleton soldier in the Demon King’s army. The Demon King has been defeated and Skul, with the help of his fellow forces of darkness, sets off on a mission to strike back at the hero who slew his leader. The game’s story is primarily told via various cutscenes between acts and through snippets of dialogue. Everything is translated from Korean and is slightly awkward due to it, although not to the game’s overall detriment. The storybook-style cutscenes are well done and decent for what they are as well. I have to say though, that I got extremely sick of the whole hero versus demon king trope years and years ago, as it’s been beaten into the ground to the point of ridicule.

As the game is a rogue-lite, play sessions are divided into individual runs with four chapters to get through. There are no warps available, so you’ll be starting from the very beginning each time. Each act in Skul: The Hero Slayer takes place in a different location. For instance, the first is a forest, the second is the royal castle, the third is the castle’s dungeon, etc. Each of these locations has many of its own enemies and there’s a great amount of variety between the types you’ll encounter. Melee soldiers, archers, mages, ents, and deformed experiments represent some of the game’s bestiary. All of them are detailed, well-made sprites that bring the world to life. 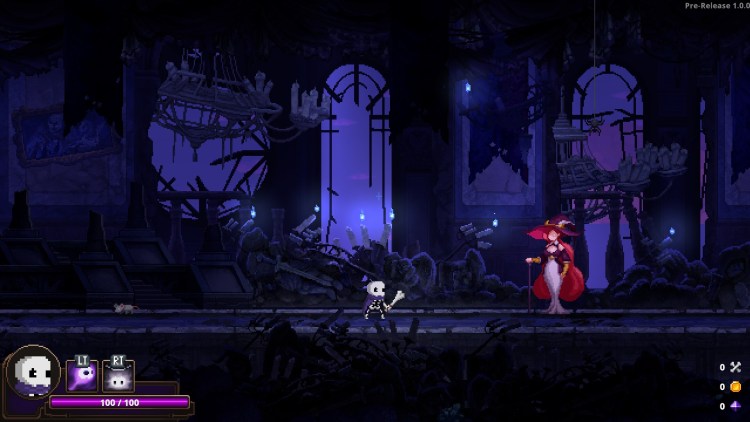 Each run in Skul: The Hero Slayer begins with our tiny undead hero starting at his home base, where he’s staying with a witch and a couple of other beings that you can free from cages to join you. The witch allows you to spend the game’s permanent currency on upgrades, while the other two give you a new skull and piece of equipment, respectively. One of the most unique elements of the game is that picking up a new skull changes the main character’s appearance and gives him different move sets and abilities. There are a ton of these, many of which are unusual and creative.  There are normal appearances that are just skeletons with weapons, such as swords, shields, or even a spell-slinging mage. But then there are archetype appearances such as a werewolf, a cowboy, a ninja, an ent, or even a mummy.

They’re all fun to use and have their strengths and weaknesses. Plus, they can all have up to two special attacks that operate on cooldowns, although almost all of the archetypes only offer single special attacks at their lowest levels. What’s more is that each archetype has more than two skills, so there will be variations between playthroughs even when you’re using the same archetype. As you find more skulls, you can choose to destroy them and take the bone pieces they’re made up of. All lower-leveled skulls can be powered up to the next tier this way, which is one of the most important ways to keep yourself alive.

As for equipment, you can have a bunch of pieces at once and need to pick and choose based upon what build you’re going for. Skulls come in three types: power, balance, and speed. Equipment can boost damage, health, and various other properties. Succeeding in Skul: The Hero Slayer is dependent on picking a skull, leveling it, and grabbing the right items along the way. As with most other action rogue-lites, failing to do so will see you dead as a doornail. The witch’s permanent upgrades also help, though, as they let you increase your damage, health, and even let you come back to life once after dying. 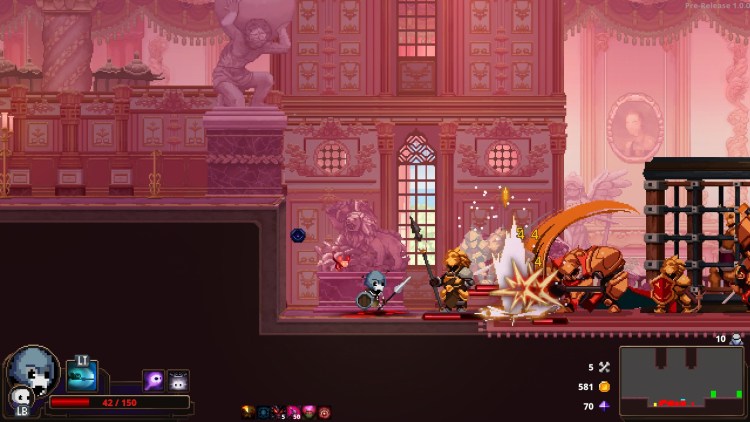 You only get two

Most of the skulls are melee-based and typically just have a quick two-hit combo. They can also dodge, with faster skulls covering more ground during this. Stronger skulls get a downward smash that is also highly useful. The trick is to use all of these moves to create an offensive synergy, as each act is made up of several areas where your goal is simply to kill all of the enemies. One of the neatest things that separates Skul: The Hero Slayer from similar titles is that you’ll often be fighting hordes of foes at once. The screen will be covered in sprites that you’ll have to bash your way through, and it’s delightfully hectic. The action is highly satisfying and responsive too, and it’s often a blast to bash your way through crowds even with such simple move sets.

There is a substantial trade-off to this, however, as it leads to enemies obscuring each other and you’ll end up getting hit simply because you can’t tell that one enemy is about to strike. This becomes even more problematic when more dangerous enemies are in the mix. As such, Skul: The Hero Slayer‘s difficulty can often feel unmanageable if you haven’t gotten lucky with your build. After you clear an area’s enemies, you’ll earn that area’s reward and often choose between one of two doors to move to the next area. Typical areas either reward you with gold, a new skull, or a new piece of equipment. Furthermore, the doorways leading to these are clearly delineated.

Due to this, there’s a certain degree of strategy when it comes to picking doors. Either way, you’ll eventually end up at a shop that lets you heal, purchase new equipment, switch to a free skull, or buy a passive upgrade that doubles as a special ability. Each act has a mini-boss fight and a boss fight as well. The mini-boss fight in the first act is against a single strong foe (and there are several of these that you’ll face randomly), while the second act pits you against two, with the third having three, and so on. These mini-boss fights are typically fine and the fact that you aren’t constantly facing the same enemies in exactly the same order keeps them from feeling stale. 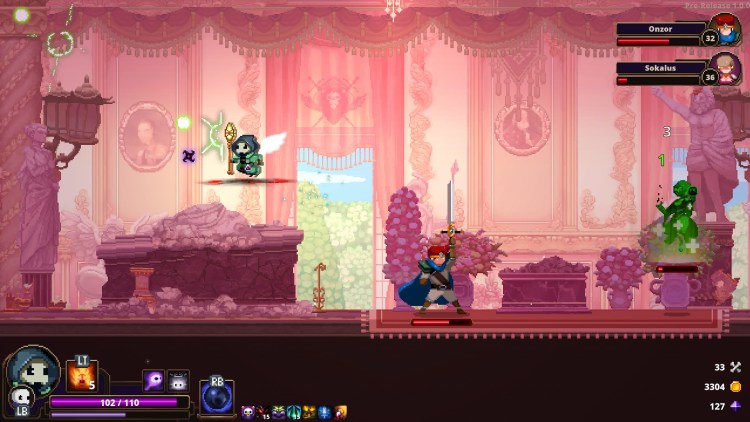 The same cannot be said of Skul: The Hero Slayer‘s boss battles. The first boss is a giant, corrupted ent that mostly slams its fists into the ground. By my third run, I was utterly sick of fighting it. Yet I fought it again and again and again. And it has two forms. The other bosses aren’t any less obnoxious, save for being harder. In fact, I’d say that the worst thing about the game is fighting these tedious bosses time and time again, even if later ones do reward you with a ton of permanent currency.

It’s also worth mentioning that there’s absolutely no saving mechanic during runs. If you need to stop for whatever reason, well, you can’t. More egregiously, if Skul: The Hero Slayer crashes, it’s treated like a death. I was having an amazing run with two legendary skulls and a suite of powerful gear pieces that made me a force to be reckoned with. But then the game crashed. When I booted it back up, I watched with horror as regular tiny Skul pulled himself from the Earth.

Overall, Skul: The Hero Slayer is a wonderfully entertaining rogue-lite with great visuals and strong gameplay. Once tedium sets in though, it can be hard to get motivated to play additional rounds. Plus, the constant knowledge that I’m just a single crash away from losing absolutely everything makes each run more of a nervous endeavor than necessary. Still, this is undoubtedly a great game worth picking up. I just wish it went about a few major things differently. 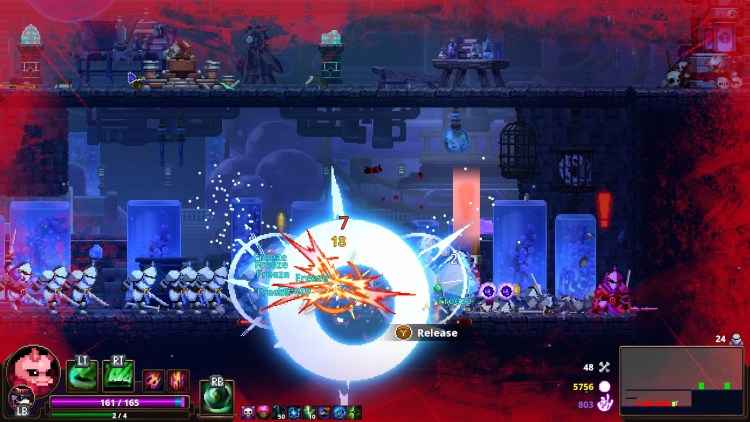 Skul: The Hero Slayer is lovely, action-packed, and full of excellent choices. Repetition can set in rather quickly due to tedious bosses, and a single crash can ruin an entire run, but it's one of the better action rogue-lites I've had the pleasure to dump some time into.

Hitman 3: Dubai guide — On Top of the World mission

By Martynas Klimas21 hours ago
Reviews