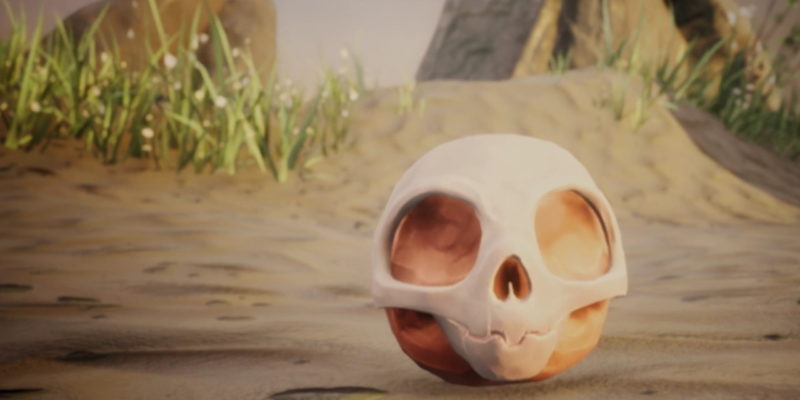 A lot of indie games don’t necessarily earn the love they deserve. These are the passion projects that either small teams or individuals sink incredible hours into to overcome the trials of game development. Despite this, many indie games fall short by simply not executing and sticking to what they do best. And Finish Line Games’ Skully appears to be the latest victim of this ongoing war.

Skully is a 3D physics-based puzzle platformer. It sees you play a washed-up skull that shares the game’s name, that has been reincarnated by one of the locals, Terry. Possibly a god of the land, Terry explains to Skully that he needs his help to once again bring his now broken family back together.

The main narrative has Skully visit each of Terry’s siblings in an attempt to negotiate peace. Unfortunately, Terry isn’t exactly a skilled diplomat and each encounter ends in either you running away or a huge fight. Usually the former because poor Terry has no backbone (get it?).

Each of the siblings controls a respective element. His sisters Wanda and Fiona control water and fire respectively. As for his brother, Brent,  he controls the element of wind. Meanwhile, Terry uses the power of the earth to give life to inanimate rocky objects.

While the story flows well, widely thanks to how simple it is, I have to admit I find our protagonist’s partner rather annoying. Terry constantly puts forward this idea that he is the weakest of his siblings and that he never stood a chance against them. 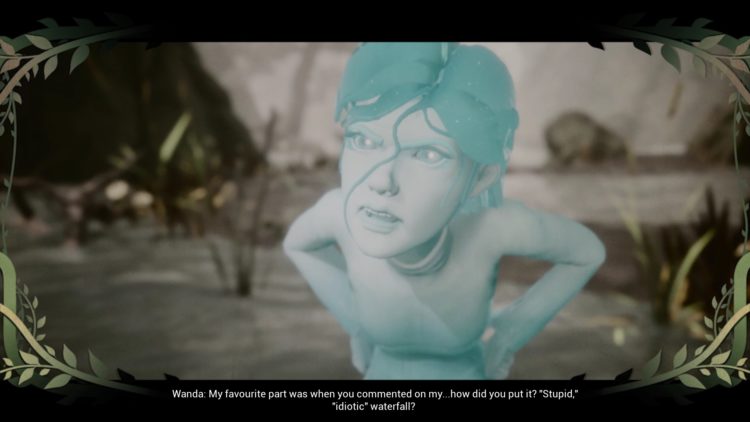 And yet our introduction to the game shows him creating a shapeshifting, intelligent life-form out of just clay and a human skull. It may not have been exactly what he intended to make, but it’s impressive nonetheless.

You can argue he only just discovered his true powers at the start of the game, but this inferiority complex of his continues throughout the narrative. It’s also pretty apparent that his siblings may have better reasons to distrust him than he lets on. As we find out early on into the story, they actually reached out to him for help first. There’s a sense of hypocrisy that ol’ Terry is now acting like the good guy.

Regardless, I did enjoy the portrayal of all three of his siblings and there’s no doubt they too are equally guilty. I kind of get a Lord of the Flies vibe from Skully, albeit with 100% less child murder. And that’s always a good thing.

On the gameplay side of things, there are comparisons that are hard to ignore. The majority of platforming in Skully has you control the little guy in his regular skull form. This movement is rolling based and very comparable to the likes of Super Monkey Ball but with Samus’ morph ball-inspired controls (including the spider-ball for occasional wall climbing).

Skully’s weakness is water. Contact with any water won’t instantly kill you but will rather drain your health rapidly. I did figure out though that if you spam the jump button you can effectively skim any body of water in the game. There were a couple of points where I managed to skip the intended puzzle by doing this. 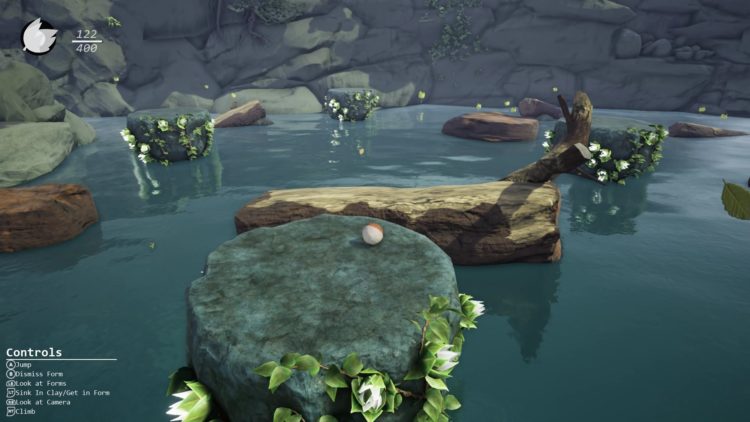 It’s a similar story with one of the form upgrades you unlock later in the game. It basically lets you yeet Skully across the map and there are several spots where puzzles become more of a suggestion than a necessity thanks to this.

To be fair, this freedom of solving puzzles how you like is fun, but it can result in you skipping intended gameplay mechanics. You see the core of Skully‘s puzzles is that he can morph into three different forms, each offering powers of strength, speed, and verticality.

As you proceed through the story these forms receive secondary powers. The speed form has the ability to move certain platforms on the horizontal plane. Somehow I managed to completely miss the tutorial telling me he could do this which led to a very confusing puzzle segment shortly after unlocking the double jump form.

The idea was to use multiple forms at once. The verticality form could shift one of two platforms up and down while the speed form was used to put them in place. Without knowledge of the latter, I ended up struggling as the platforms weren’t aligned properly to be climbed by default.

When Skully focuses on its fast-paced platforming, it’s a fantastic game. However, this isn’t what it does most of the time. Likely to vary up the gameplay a little, there are several segments that feature a classic Crash Bandicoot–like fixed camera. These stages are a little too difficult to judge depth perception for a game this precise. 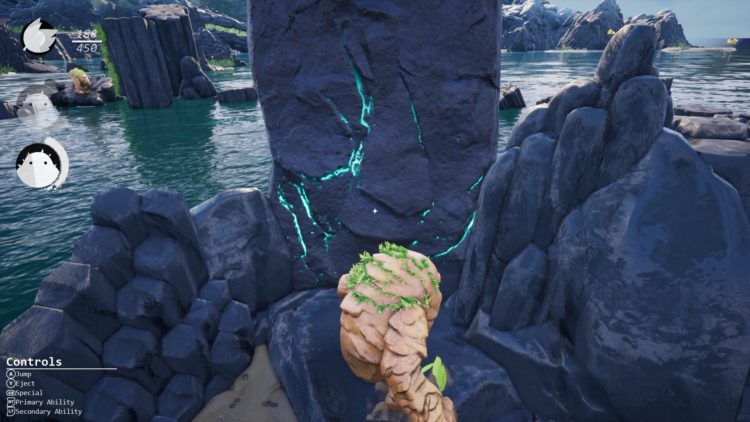 The worst of these has you moving towards the screen without the ability to control where you’re looking. It may have been a throwback to some of the early 2000s 3D platformers, but that doesn’t make it a good idea. We’ve moved on and frankly, I want to be able to control my camera at all times. Especially because Skully‘s regular camera controls are very well done and rarely get obscured by the level design. I would say easily over half my deaths were tallied up in these relatively short but frustrating platforming segments.

The different forms’ abilities are well implemented, but it did get to a point where I was audibly sighing at most puzzles. It’s not that the puzzles are bad, but rather that they take away from what Skully does better. It’s jarring how the gameplay can transition from fast-paced technical platforming to extremely slow methodical puzzling in a matter of seconds. I think this approach works better for games like Limbo and Braid where the gameplay is already tied into methodical puzzle solving.

If there’s one thing I can’t criticize, it’s how well Skully runs. Given its ambitious art style and general aesthetic, I did have some concerns that the more demanding areas could struggle. But in my playthrough, I didn’t experience any frame drop or skips even once.

It is hard-capped at 60 FPS with no clear workaround, but I’m uncharacteristically okay with that because of how consistent its frame rate is. The whole point of capping a game’s FPS is to provide a more consistent gameplay experience. Most games cap this and then still end up having issues with stuttering. If you can manage to actually produce that flawless capped frame rate at all times, I’m perfectly okay with this approach. 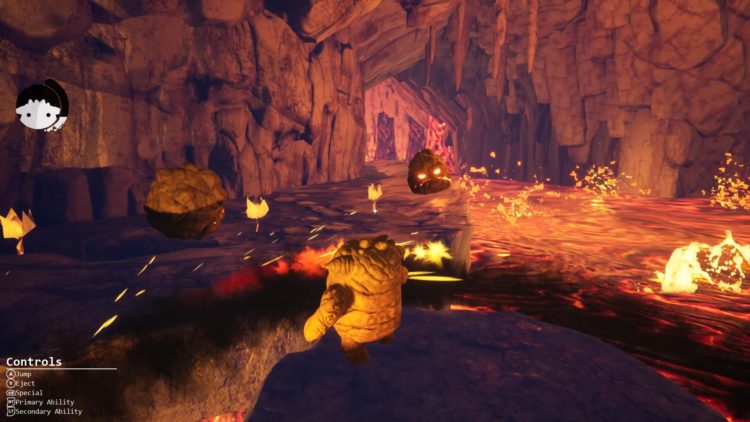 It’s even more forgivable when you see how good Skully looks for an indie romp. It’s almost becoming the norm now for indie games to be the ones that seriously impress me, and Skully is no exception. I’m a sucker for beautiful water and lighting and Skully is brimming full with both examples.

While not extraordinary, Skully is fun enough when you get to roll around and explore its beautiful levels. The narrative is easy to follow and delivers more on the story front than a game of this nature probably has any right to. However, the constant switching between its fast and slow gameplay as well as the frustrating fixed camera segments drags down a lot of its positives. Honestly speaking, when Skully tries to be a 3D platformer I’d argue it could be one of my favorite games of 2020 so far. Unfortunately, when it tries to be just about anything else, Skully sinks.

A very respectable attempt at creating a 3D puzzle platformer but its pacing issues and somewhat frustrating camera design prevent Skully from being a great game. Still, there's some good value there for those willing to dish out the hefty $30 price tag.