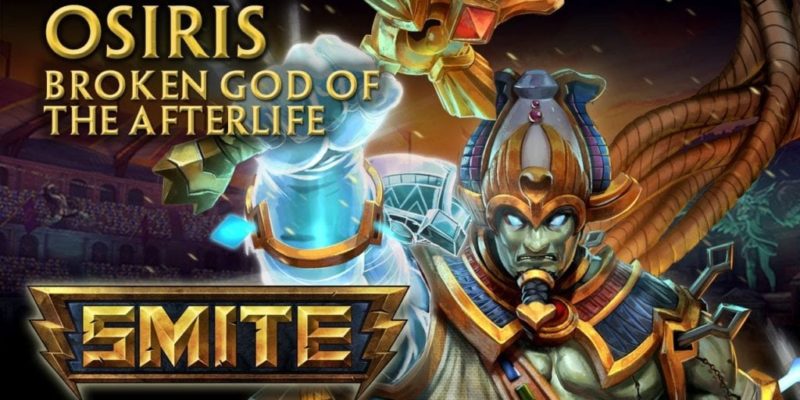 Smite‘s Siege update will go live tomorrow, bringing with it a slew of new features.

Firstly, there’s a new god: Osiris, the Broken God of the Afterlife. Osiris looks like he’ll be focused on locking down foes with slows and stuns, while his ultimate prevents them from healing and his passive lets him dive past blocking abilities. As such, I rather expect he’ll do a good job of ganking. The reveal video below offers a lot more in the way of details.

Secondly, there’s a new game mode: Siege. This is described as a fast-paced Conquest variant with teams of five battling it out over a two-lane map. Players earn points for killing minions, jungle camps, and other players, and when their point count hits 100 they spawn a powerful siege weapon. Portals allow them to instantly teleport to a friendly siege weapon, and a Silver Fury camp in the jungle will instantly spawn one.

Thirdly, this update brings leagues to the game. They seem rather League of Legends in design, with six tiers (Bronze, Silver, Gold, Platinum, Diamond, and Master), each of which contains five divisions. Players earn League Points for each victory, and every 100 League Points moves you up a division or a league. Every two months your League Points are reset to zero, but your division, league, and rating are unaffected. As for that Master tier – that’s only for the top 2% of players, so you’re going to have to be pretty bloody special to get into that.

Finally, there are a couple of extra skins available. The Golden Ullr skin will become available, as will the Blind Vengeance skin for Nemesis, turning her into a ninja.

You can view the patch update page over here, or have a looksee at the Osiris reveal video below (which also details the Siege game mode). The Smite patch is due to go live tomorrow, on 6 May.

Bill Gates would support Xbox spinoff, BUT says Microsoft is bringing PC and Windows gaming together