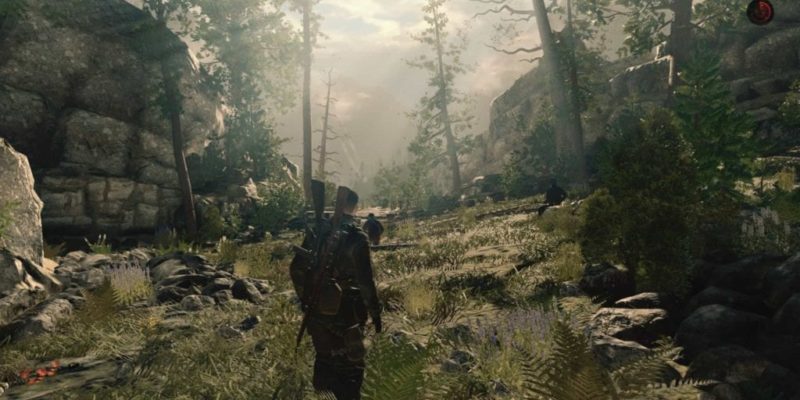 Sniper Elite 3 was – and I apologise for my heavy use of technical terminology in the very first sentence – a bit bloody good, in terms of how it worked on PC. By this, I mean it had tweakables, it looked lovely, and it ran really well. Hopes were therefore pretty high for Sniper Elite 4 and, by and large, it lives up to them.

Usual stuff: I’ve been running the game on an i7-3820 with 16GB RAM and a GeForce GTX 970. Adjust your expectations accordingly based on my experiences.

First things first, Sniper Elite 4 has a launcher and its graphical options are in there. They’re also in the game, but I appreciate the launcher if only because a lot of the options are of the “won’t take effect until you restart the game” variety. They are here: 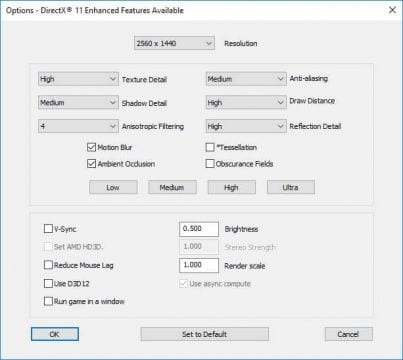 Not hugely in-depth, I will admit, but enough to help the game run on a pretty wide range of systems, and they have nice little pop-ups that explain what they do. From what I’ve been able to tell, the options most likely to murder your framerate (aside from resolution) are Texture Detail, Shadow Detail, and Draw Distance. That’s not to say the others don’t have an impact, but I found my best results when dicking around with those three and leaving things like Tessellation and Obscurance Fields disabled.

Oh, and as always, plus one for the ability to turn off Motion Blur.

I’ll also note that it took me far too long to notice the ability to switch on D3D12 mode, which seemed to improve my framerate a fair bit. This means my numbers below might be a little bit off, although my experience dictates it shouldn’t be by a huge margin. We’ll get to that, anyway.

First off, here are a couple of comparison shots showing the game on lowest settings and highest settings: 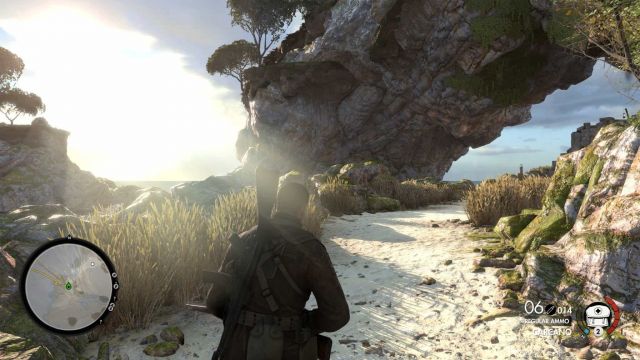 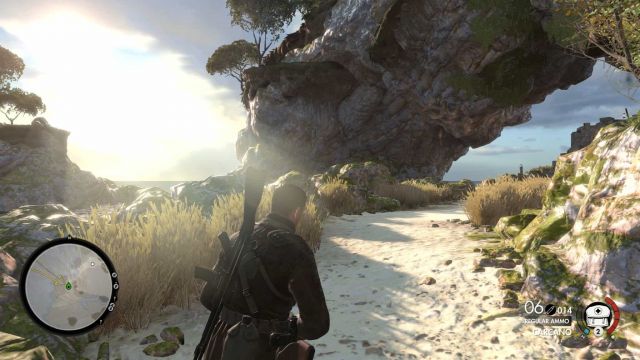 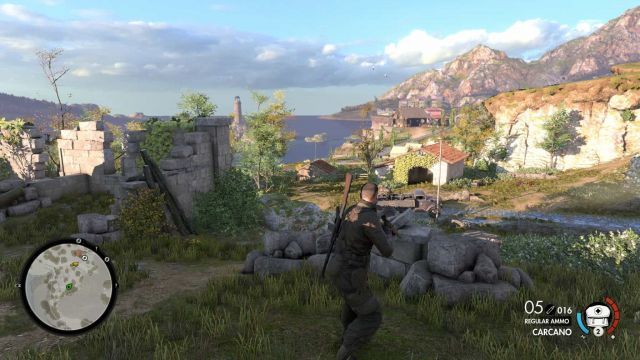 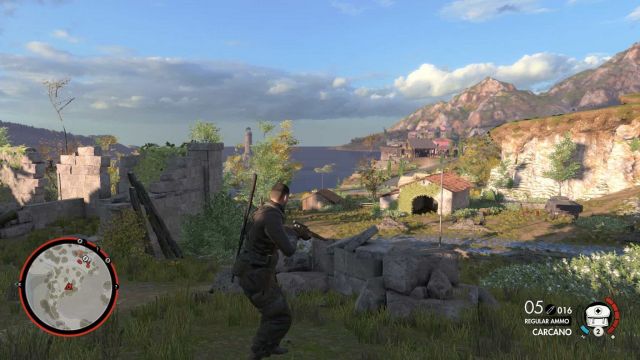 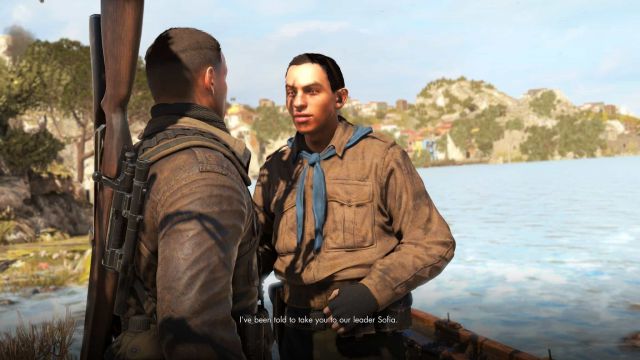 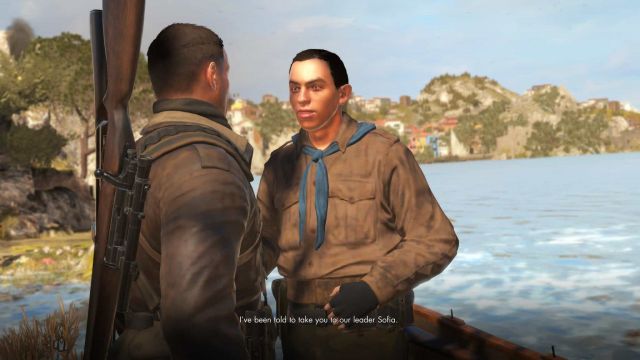 The difference is noticeable, although – crucially – Sniper Elite 4 looks kinda okay on its lowest settings, excluding the low-quality characters who appear to have crawled out of a George Romero movie. You’re going to be suffering through lower quality textures and worse lighting and shadows, but the general effect is still a game that looks alright. Ideally, though, you’ll want to fiddle with the settings to make sure you’re at least running a few things on Medium or High.

As for framerate… well, I tried it on both 1920×1080 and 2560×1440. On my specs, 1920×1080 with settings on the High default is basically perfect: 90-100 FPS in general play, with around 60-70 FPS when things are a bit busier or more complex. Bumping things up to Ultra was still more than playable, with around 60-70 FPS in general play, and somewhere around 35-50 FPS when intense. Not perfect, but this isn’t a twitch shooter, so the drop to a fairly constant rate didn’t actually impact the gameplay experience much.

It’s worth noting that this was without D3D12 turned on, and based on what happened when I did switch that on, you might be able to expect another 10 FPS on top of that.

Finally, bumping the framerate up to 2560×1440 had – as you’d expect – a bit of a bigger effect, but one that was still entirely playable. In that resolution with settings on Ultra, I was getting around the low 50s in general play, and 20-30 elsewhere. Then I turned D3D12 on, and it moved to the high 50s in general play and 35-40 elsewhere.

These obviously aren’t hard benchmarking numbers, but they should give you a general idea of how Sniper Elite 4 will run. 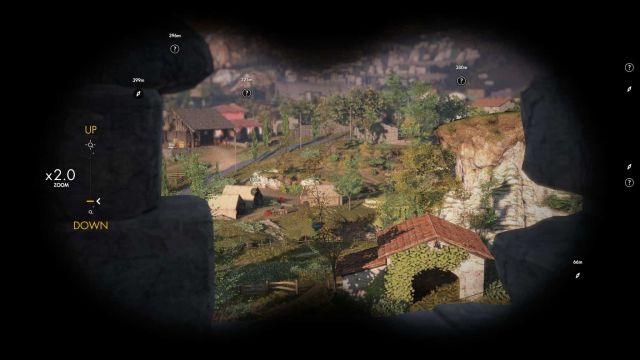 Looking at this scene through binoculars tended to drop things to the 30 FPS range.

And for what it’s worth, I found the game eminently playable on basically any of those settings. When I say “outside of general play”, I’m talking about three general occasions. The most common of these is using the binoculars, which tends to tank the framerate if you’re looking at any wide-open area (which, presumably, is why you’re using the binoculars in the first place). At a guess, this is because the game suddenly has to load in higher-resolution textures for close-up views, as it’s absolutely fine when you’re not looking through binoculars. Looking through a rifle scope doesn’t seem nearly so bad, by comparison; it still tends to cause a drop, but one that’s far smaller. This is perhaps because the rifle scope has a narrower view and seem to have some mild depth-of-field effects at the edge of the vision that blurs things there anyway. Total guesswork, though.

Fire seems to be another one that causes drops, though only on occasion. Looking at a very close conflagration (or zooming in on one with binoculars) once again drops the framerate, and I’d guess this is probably down to shadows, but it might simply be because the fire effects are quite nice. The final one only happened once or twice, but some areas and rooms just stab the framerate in the face and I haven’t been able to figure out why. One enclosed armoury room had this issue, and the only thing I can conceivably think of is that it was full of interactives like rifles and ammunition, and these are… visually intensive for some reason? I have no idea, but I can’t think of a better explanation.

Nonetheless, it runs well. Much as I’d prefer it didn’t happen, I don’t really have a problem with a framerate drop when I’m tagging enemies with binoculars, especially when that framerate is still usually above 30 FPS. You may feel otherwise, but thankfully you may have sufficiently beastly hardware that you don’t have this problem, or you can simply tweak the settings a bit to get it to a point you’re comfortable with. 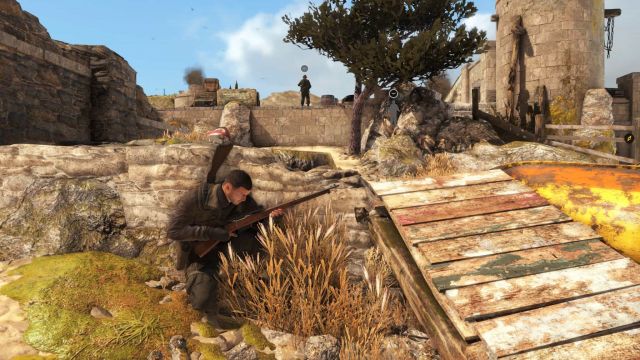 The camera isn’t bad, exactly, but I’d have liked to be able to zoom out at least a little more.

Visually, the one thing I’m not happy with is the FOV and/or camera position. It felt a little low in Sniper Elite 3, but playing Sniper Elite 4 on a bigger screen has exacerbated the problem somewhat. I’d be much happier if the camera was positioned a little further back from protagonist Karl, with a wider viewing angle – but alas, that’s unlikely to happen. Motion sickness sufferers beware, though, as this is compounded by quite a bit of screen shake when crouch-running. Again: with a game that’s mostly about slow and careful movement and timing, it’s maybe not as big an issue as it’d be with a twitch-shooter, but it’s an issue nonetheless.

Finally, controls! Yes, Sniper Elite 4 controls just fine on PC. The default keybinds are sensible, and while there are some very definite concessions to consoles (Q to open a radial wheel for your weapons and equipment, for instance) this isn’t really much of a problem. For one thing, the radial wheel works fine with the flick of a mouse. For another, pretty much everything is bound to the number keys at the top of the keyboard anyway. 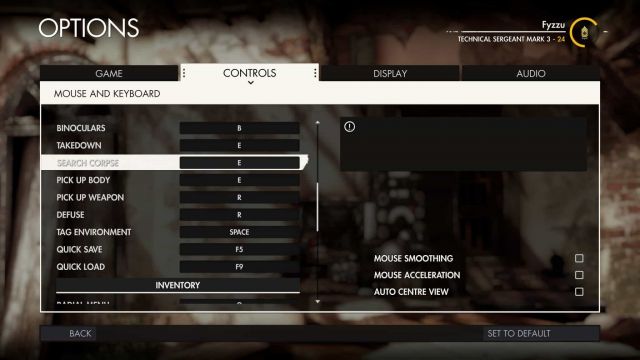 One of the things that’s new to Sniper Elite 4 is that almost every item and weapon has dual-functionality. For guns, this tends to be a switch between regular and silenced shots; for grenades, it makes them adhesive; for mines, it might be a delayed fuse or it might only go off the second time it’s triggered. With the radial wheel these are activated by highlighting the item you want and tapping the left-mouse button to swap between the two “modes” – but you can also simply double-tap the assigned number key to swap functionality.

Keys appear fully rebindable, although I didn’t try anything too obscure. Multiple functions are bound to the same key (R functions are reload, defuse a trap, and pick up a weapon; depending on context and whether you tap or hold), but these can… sort of be changed. You can absolutely change each function, so if you want defusing traps set to Y and grabbing a weapon set to O, you can do this. You can even bind all three of those functions to O, if you fancy it. Two things you can’t do are change whether it’s a tap or a hold, and bind multiple other functions to the same key.

That’s a bit confusing, so as an example, you can have defusing traps and grabbing a weapon set to O while reload remains at R, but you can’t change the behaviour of whether or not you have to tap or hold O to defuse traps/grab a weapon. You also cannot bind the key to pick up a body to O if you’ve bound those other functions to it. I don’t think this’ll upset many, though.

One very minor gripe is that there are no numbers or guides on the mouse sensitivity controls. This isn’t normally an issue for me, but in this case it is: X and Y axes have separate sensitivities, but getting the sodding things to align so that you have the exact same sensitivity for both is incredibly difficult, and one is almost certainly going to be slightly off from the other. It’s unlikely to cause any actual gameplay issues, but I’m OCD enough that it makes me mildly uncomfortable.

So, port-wise, I don’t have much to complain about with Sniper Elite 4, as you’ve probably been able to tell from the fact that I’m griping about a lack of numbers on the mouse sensitivity sliders. On my somewhat-ageing hardware it runs anywhere between “perfectly” and “acceptably” depending on how high I push the settings, and I experienced no issues with the controls. Happily, this feels less like a PC port than a full-fledged PC version. 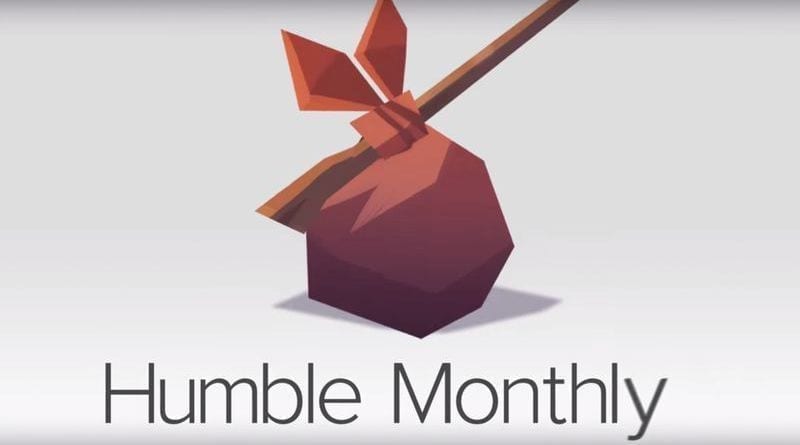 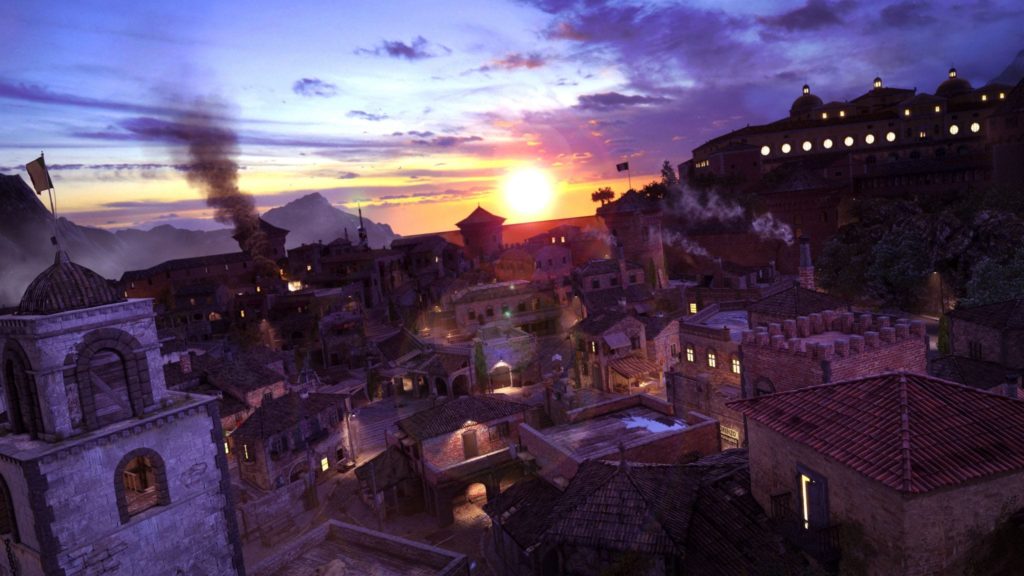 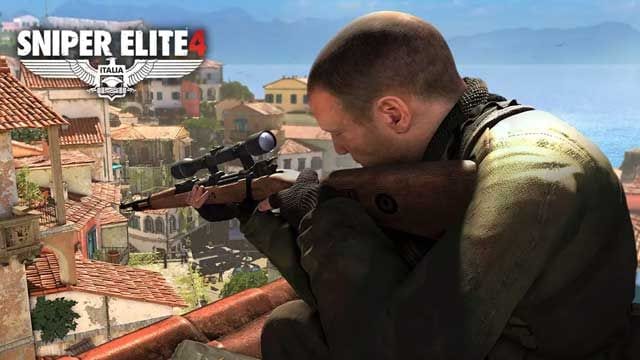 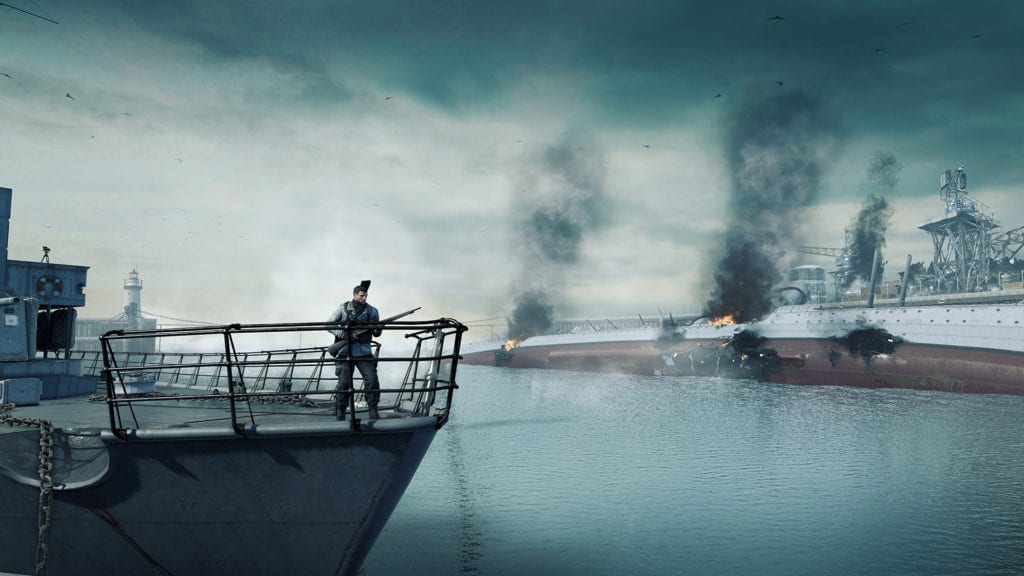 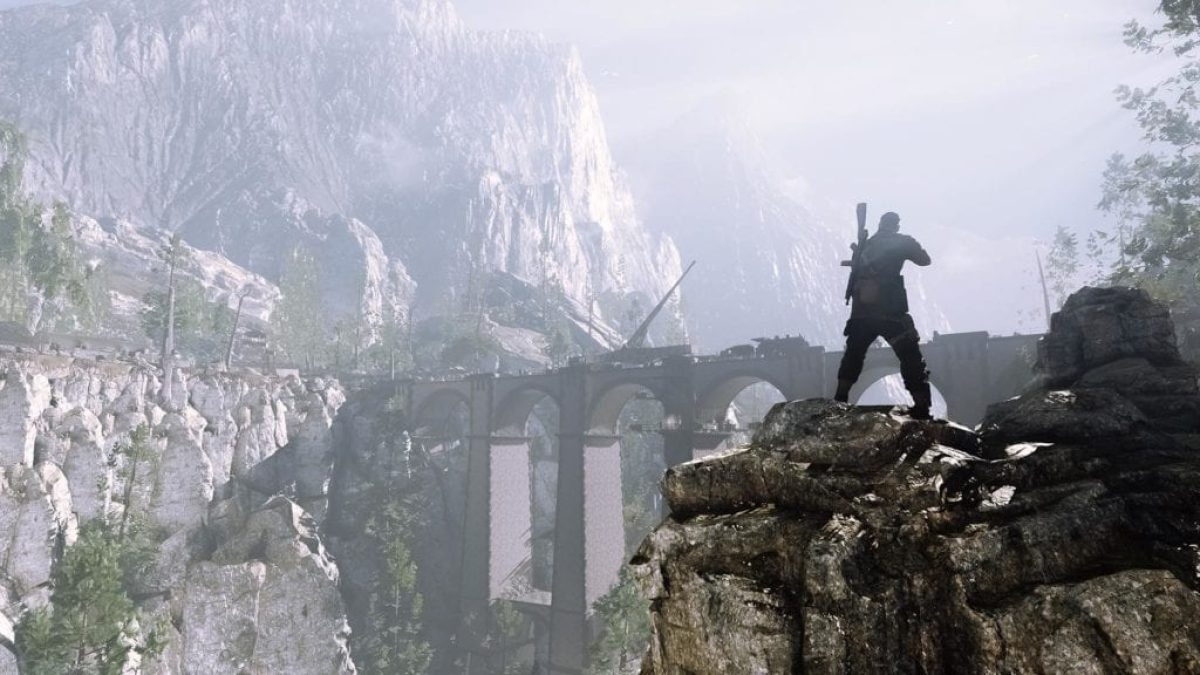 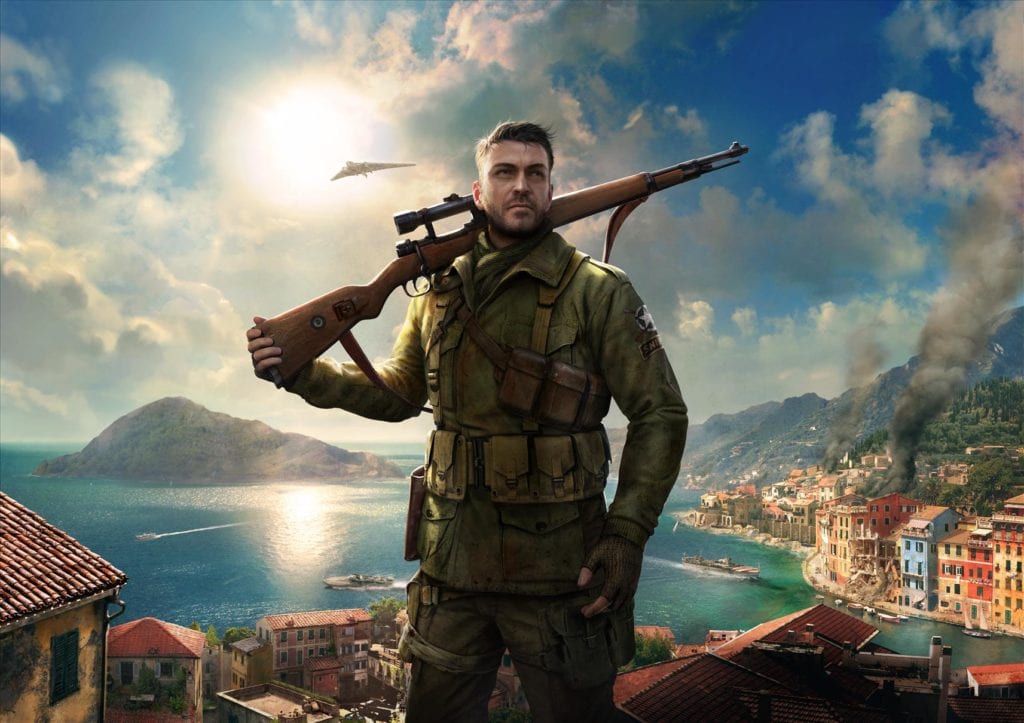 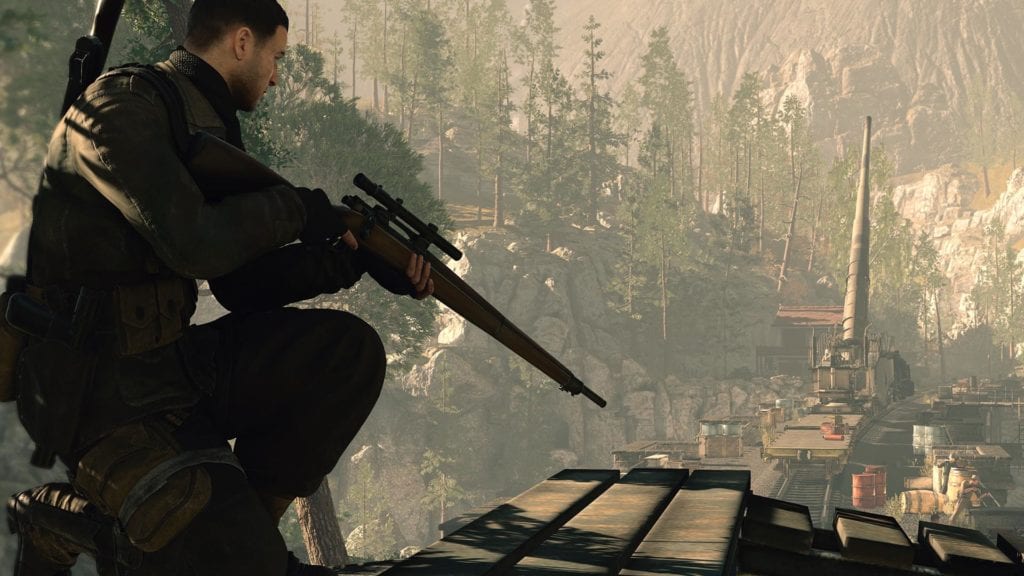 Sniper Elite 4 pre-load available now. It's a big one. 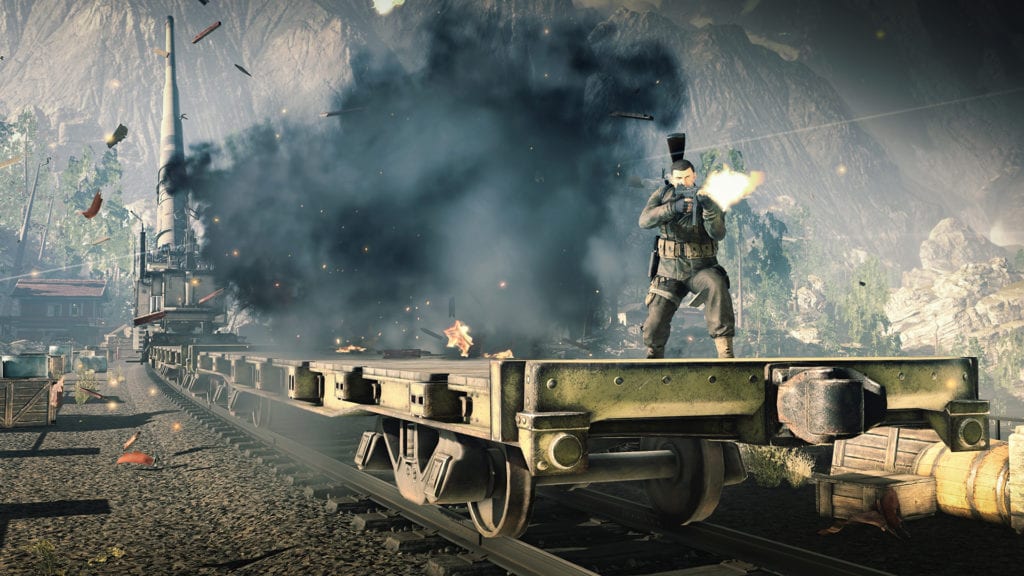 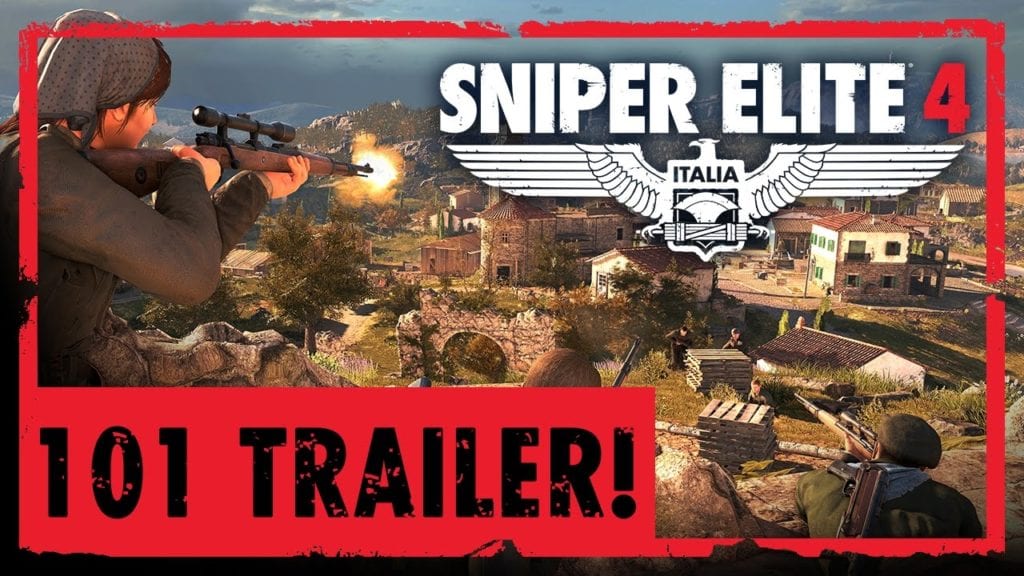 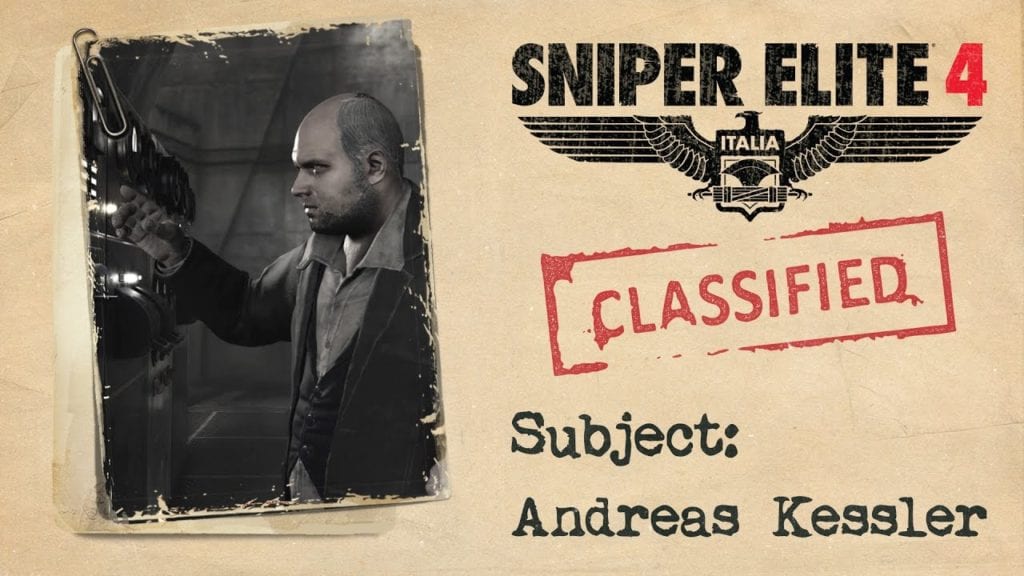 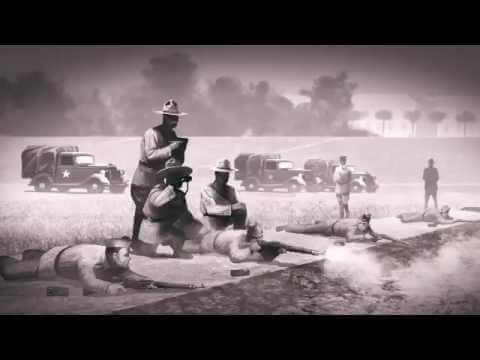 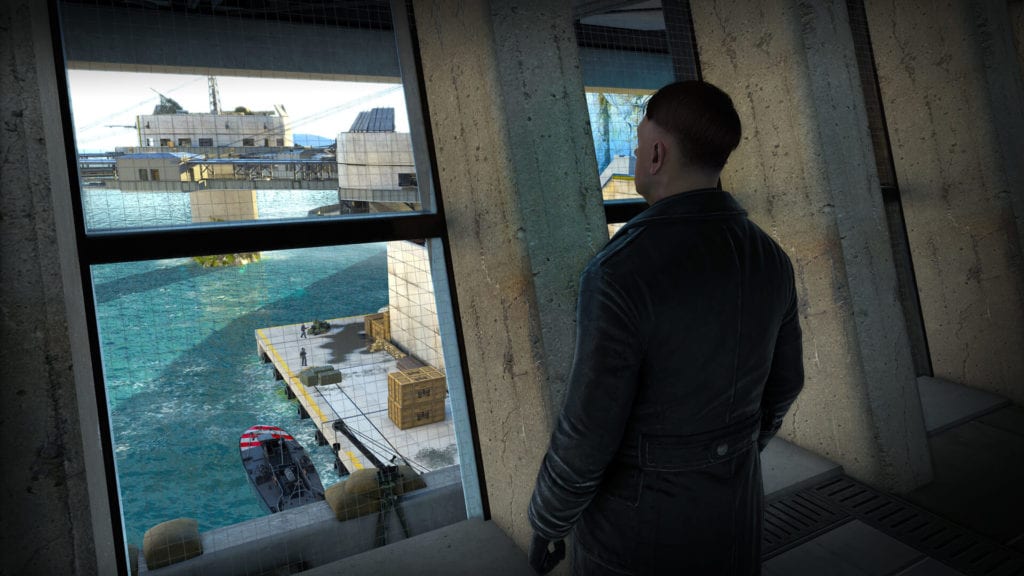 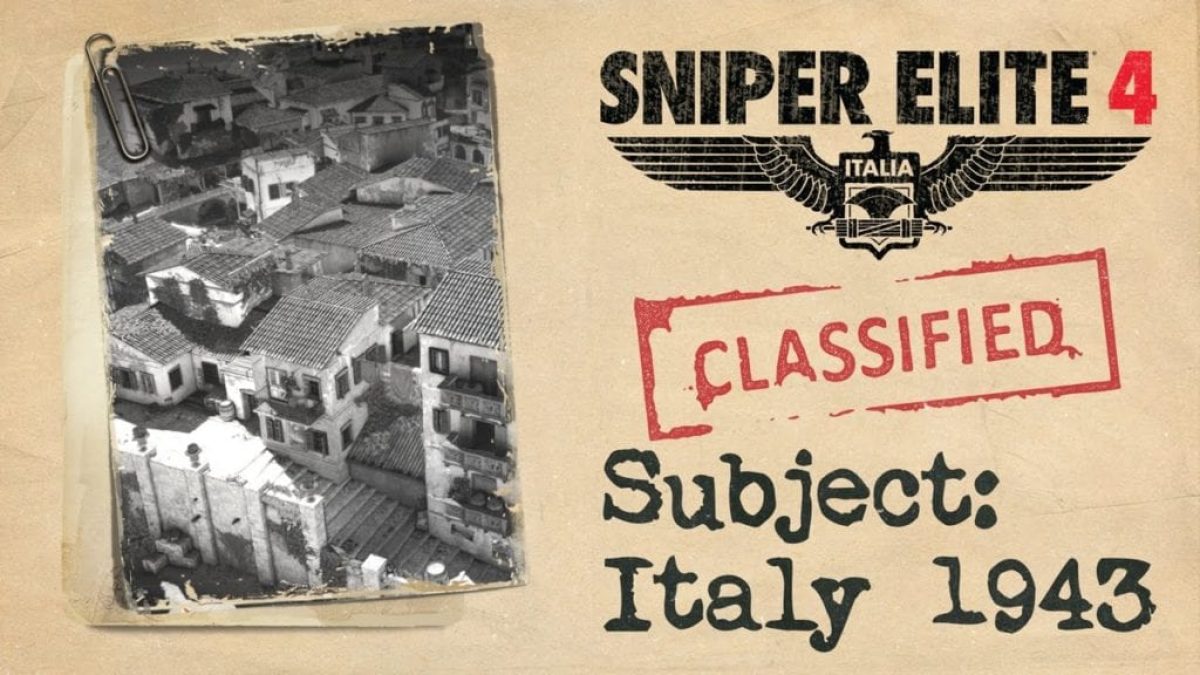 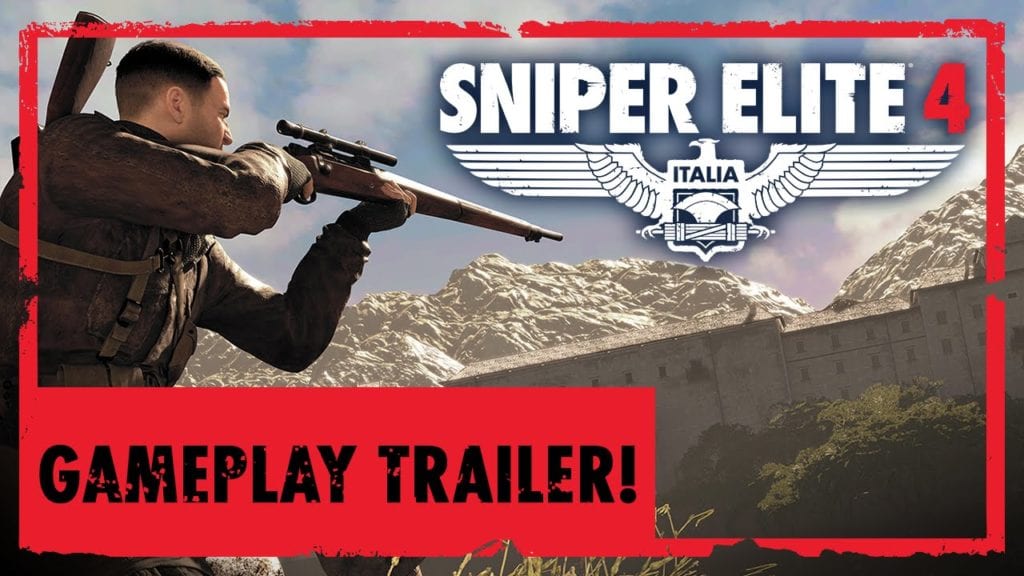 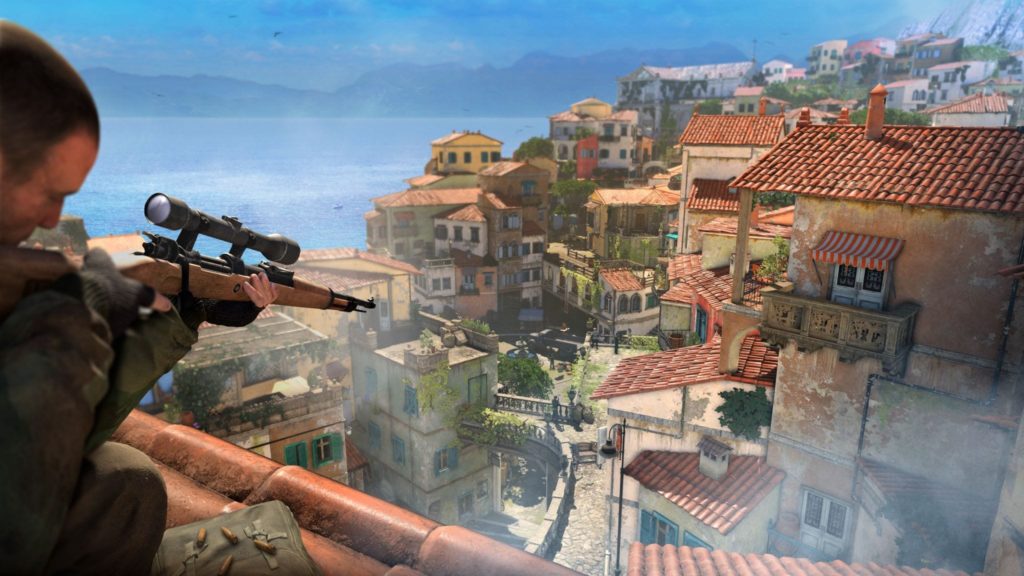 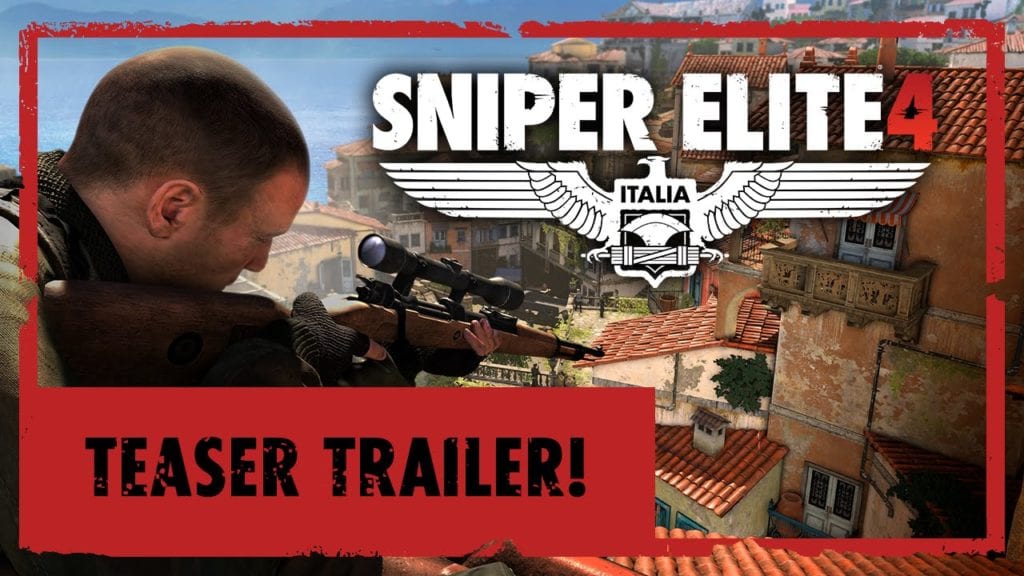