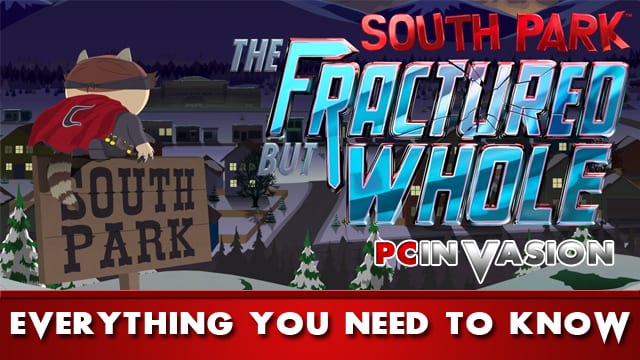 South Park: The Fractured But Whole is the follow-up to South Park: The Stick of Truth and will be released in Q4 2017. Series creators Matt Stone and Trey Parker are fully involved again, and Ubisoft will be publishing. Developer duties have switched from Obsidian to Ubisoft’s San Francisco studio.

The Stick of Truth was a send-up of fantasy RPGs, but in South Park: The Fractured But Whole the kids of South Park are playing superheroes. It continues straight on from the prior game so you’re still the new kid, but now nobody cares that you’re ‘king’ (or queen, you can play as a girl this time) of the fantasy setting. That means working your way up through the social ranks once again. Cartman’s group (led by The Coon) are at war with Stan’s Freedom Pals over aborted franchise plans for a cinematic universe, pitting hero against hero in a titanic struggle for something or other.

South Park: The Fractured But Whole will feature twelve superhero classes (each one with four powers, like, um, ‘The Brown Dwarf’) of which three are currently known. Ubisoft’s E3 conference showed the Brutalist (a close-range brawler), the Blaster (think Cyclops from X-Men) and the Speedster (like The Flash).

You’re not locked down to a single class, and can mix and match powers from different types to create a unique superhero. Of course, every superhero needs a tragic backstory, and Cartman will be only too happy to provide the new kid with a truly harrowing life experience.

The combat system is still going to be turn-based, but will work a little differently from The Stick of Truth, with ‘space’ and ‘time’ being the emphasis. Characters are no longer restricted to a single location, but can freely move (along a grid-lane pattern) to engage the foes of South Park, so you can re-position and tactically focus on who your hero needs to bring to justice first. This extends to getting behind cover, pushing and pulling enemies (into props and other characters if you wish, for extra damage or attacks), and some powers can be fired over obstacles. However, opponents can push and pull you around too.

So that’s the ‘space’ aspect. ‘Time’ in South Park: The Fractured But Whole is all about farts. Mighty, mighty farts that are now able to rip apart the very fabric of time itself. Mechanically, this will let you re-arrange the turn order of your party and their foes.

The original working title for the game was The Butthole of Time, but that wasn’t going to fly with retailers, so Matt and Trey had to get slightly more creative with the name.

Pre-ordering South Park: The Fractured But Whole gets you a free digital copy of South Park: The Stick of Truth, so that might be worth doing if you’ve not played it. It’s Ubisoft, so naturally there are multiple pre-order editions available.

Standard has the game. Obviously.

The Gold Edition comes with:

– The complete game
– The Season Pass
– A set of in-game costumes and a bonus perk to get fans started
– “Towelie: Your Gaming Bud”

And the Collector’s Edition has:

– The complete game
– “Towelie: Your Gaming Bud”
– A set of in-game costumes and a bonus perk to get fans started
– A set of physical lithographic prints with art from South Park Studios
– A six-inch replica figurine of “The Coon” by UbiCollectibles and ArtToyz

PDX CON 2017 opens to the public next May

By Jason Rodriguez38 mins ago
Guides