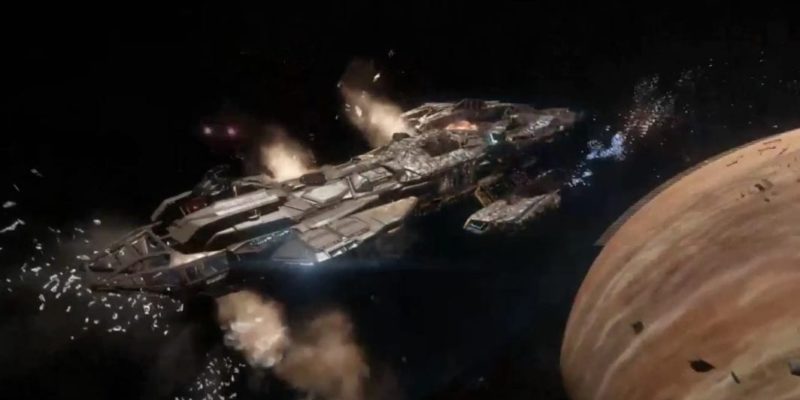 The typically colourful Star Citizen fan event from Gamescom has just concluded, so if you missed that and want to either view the whole thing or catch up with some text highlights, do read on.

In terms of actual demonstrations, the main events of 2015 were a look at the ‘Social Module’ (walking around space shops,) some Star Marine footage (walking around space corridors,) and two lengthy demos of the multi-crew system coming to Arena Commander 2.0 (floating in space and flying ships about.)

The full presentation should hopefully be below, unless YouTube start mucking about. Skip to about an hour and six minutes for the actual start.

If you do decide to watch it all, look out for the incredible botch school raffle around half-way through. It’s amazing. I loved every moment.

So, after an impromptu Star Citizen cosplay contest that definitely wasn’t implemented at the last possible moment to buy more time to set up, the presentation proper began with an announcement about the Social Module. This opening was plagued by audio issues which, sadly, persisted throughout the whole event. 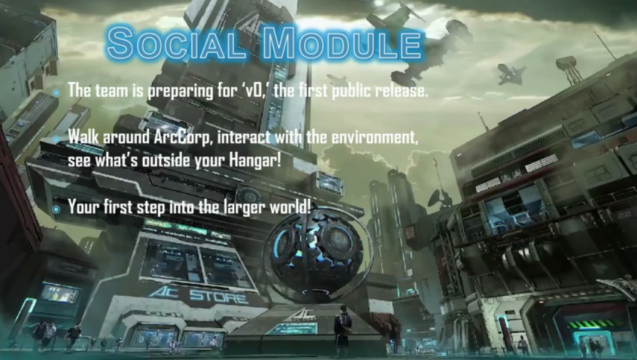 The first of many slides.

The release of the Social Module is tentatively scheduled (aren’t they all?) for “this month.” So it might show up by the end of August. Initially, it will support up to 20 players in each space.

Basically, it allows you to leave your hanger for the first time and go for a bit of a wander in the Arc Corp planetary environment. You can chat, use emotes, and (all-importantly) do some bad dancing. 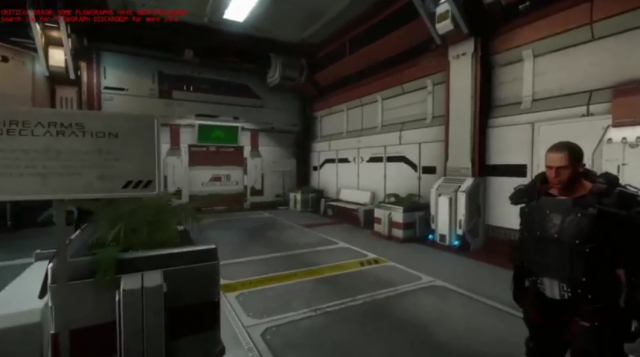 A fascinating look inside the Arc Corp customs area.

The little demo tour of Arc Corp took in a few sights, including some plaza shops where in-game medical supplies and weapons can be purchased. They also strolled around the job center, a bar, and lurked in a dodgy back alley for a bit as an example of how the planetary environments will sometimes extend beyond usable shops and locations.

Not every shop or ship dealer will stock every item in Star Citizen’s persistent universe, so (like Elite) you’ll have to visit other destinations to pick up certain, specific items.

With the Social Module demo wrapped up, Chris Roberts moved on to Star Marine to, in his words, “prove it still exists.” Ooh, catty. 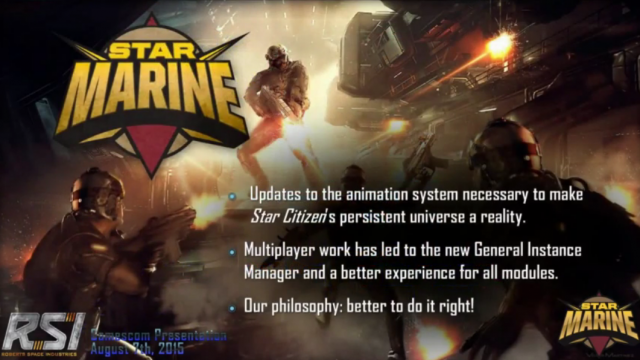 It’s not cancelled, everybody relax.

The updated release schedule for the first version of Star Marine is “hopefully the end of next month” (September). Once again, Roberts cited the problem of unifying first and third-person animations so that both looked decent in-game. Unlike purely first-person games, Star Marine and Star Citizen can’t ‘cheat’ with some of the animations, because that looks bizarre to an external observer.

This is a problem other games (Arma 3 for example) have overcome, so it’s presumably just a matter of doing a lot of tweaking and testing of animations.

Other issues mentioned as still being worked on were the fidelity of hits, the impact of being hit by shots, and the specifics of limbs like arms and legs being wounded in combat. Ragdolls are also said to need work, with the whole character skeleton set to be redone in future. 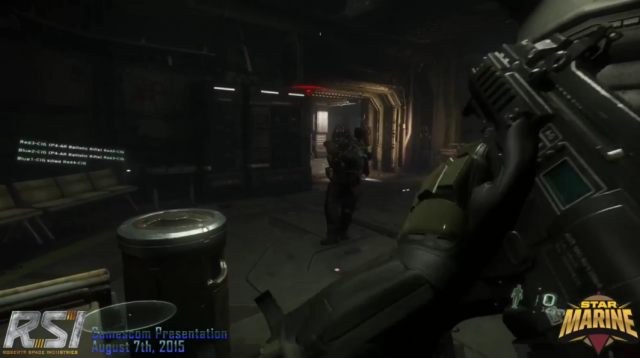 The demo portion here showed some guys cutting about some space corridors in a pretty tradition (albeit rough-looking) FPS way. They popped out of first person into third person and back again a few times too, just to show they could. For some reason, most of the crew were just ignoring Chris Roberts’ suggestions for things to demonstrate during this segment. Maybe they couldn’t hear him properly or something.

Next up were a couple of slides regarding progress on the Ship Pipeline and Squadron 42. Here are those. 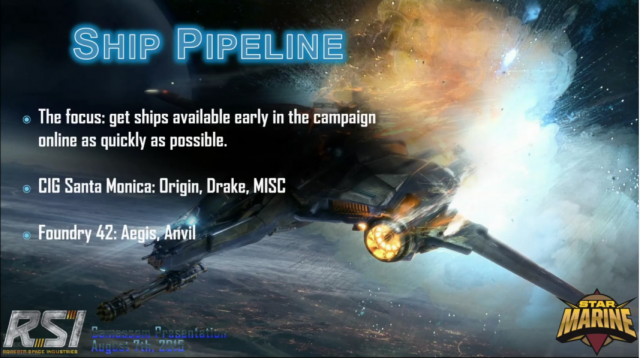 That background ship needs work, it looks like it’s on fire. 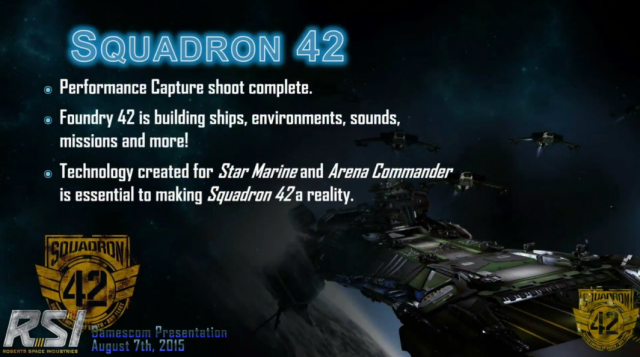 No release schedule on this one yet.

Then I went to make some lunch so I missed the specifics about buying extra modules for ships, but here’s the slide regarding that stuff. Looks like a handy way to sneak a load of extra cash out of people to me. 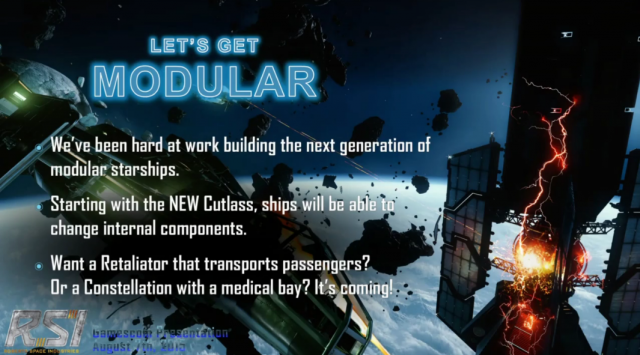 A new way for people to spend money? Star Citizen, you surprise me.

That was followed by the greatest/worst raffle I’ve ever seen in my life. It was a glorious shambles, full of mix-ups, awkward delays, winners who had no idea which prize they should have, and utter confusion. Incredible stuff. 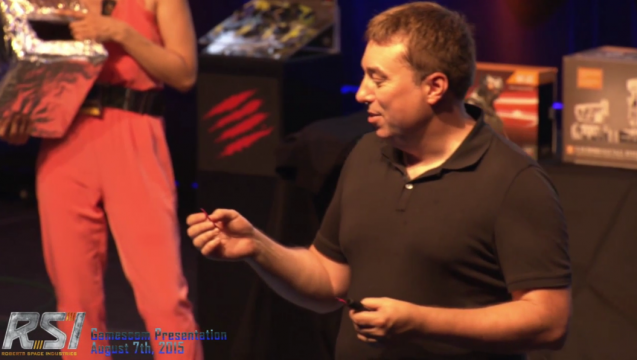 Most people in attendance probably weren’t there for a Star Citizen raffle, mind you. They were waiting for a demonstration of multi-crew activities in the upcoming Arena Commander 2.0 alpha.

They got that. Not just once, but twice. 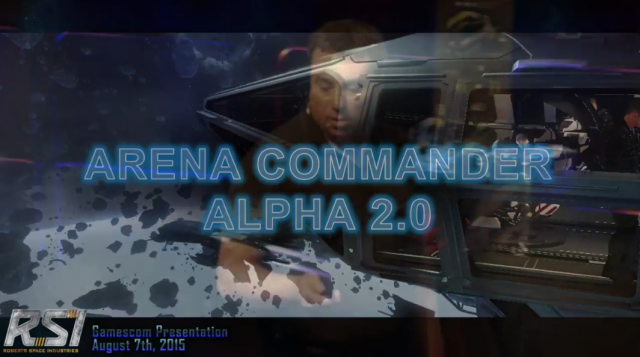 The ghost of Roberts haunts this slide.

The substance of this Gamescom event took its time arriving, but was probably worth the wait for those interested in how Star Citizen is progressing.

It still has lovely graphics. Obviously.

The multi-crew demo(es) consisted of meeting up with a crew inside a space station, walking to a trio of ships, and setting off in search of a derelict Retaliator vessel. Four people were inside a Cutlass, now set up as a multi-crew ship.

After arriving at an asteroid field, the Cutlass squad jumped out, drifted through space, and seamlessly entered the Retaliator (which has fully modelled interior corridors.) The chaps had to get the gravity and power back on, achieved by finding the engineering section and flicking the necessary switches. When gravity returned, it had the effect you’d expect, allowing the players to walk around instead of floating about. 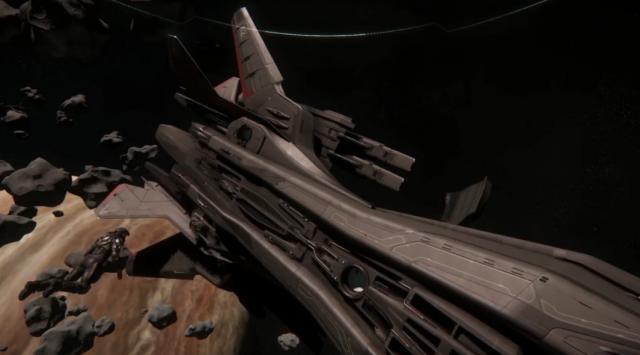 At this point a rival Constellation ship appeared, spoiling for a fight. This provided a chance to see camera shots from inside separate turret pods (each crewed by a different person), and ultimately wound up with the Cutlass and Constellation being destroyed. Roberts seemed keen for somebody to be firing torpedoes during this section, but he again seemed to be ignored.

The intention was then for the Retaliator to be flown back to the space station, followed by the recovery crew disembarking. First time around this couldn’t happen, because the ship had been too badly damaged in the fire-fight. During the encore, it worked as intended.

As a demonstration of how players can move between ship to space to another ship, and how all that worked smoothly together, it was pretty impressive. Plenty of rough edges, as you’d expect, but the central premise of ship recovery appeared to work fine. 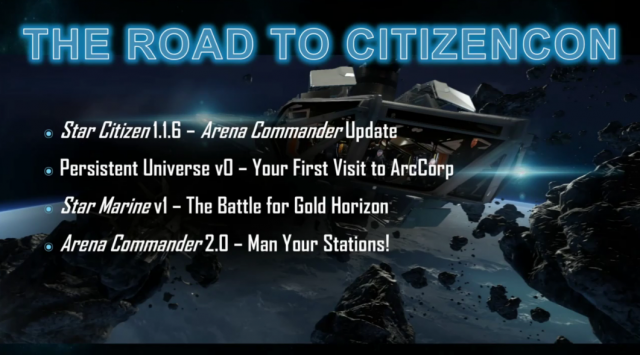 As suggested by the slide above, Arena Commander 2.0 and all attendant multi-crew fun has a very tentative pre-CitizenCon release date. That would place it somewhere in October 2015, most likely. But all of that, I’m sure, is subject to change.

Majesco to Publish “Glue” and new “A Boy and His Blob” with Five Employees, Coming to PC