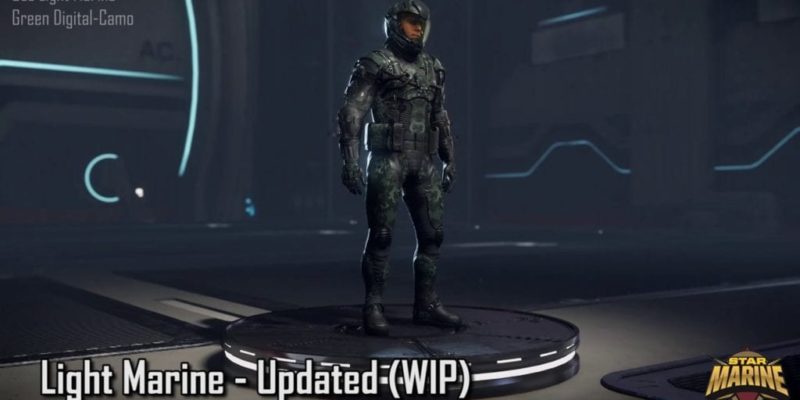 While we’ve been enjoying Arena Commander, Cloud Imperium has also been working away on what was once known as the FPS Module. Thankfully that was only a temporary name and it’s now been given the proper name of Star Marine.

Star Marine will be released in a more complete form than Arena Commander and Cloud Imperium’s Chris Roberts says that it will include “detail that you wouldn’t normally expect in an ‘alpha’ gameplay module”. The plan to release a more complete component to the Star Citizen universe is great for backers wanting to experience more of the game’s universe.

Not only will Star Marine be released with more typical FPS modes, and in case you’ve not been following it closely,  it will also include a FPS sports type game called SATA Ball which will take place in a zero gravity arena. If my memory serves me correctly this appears to be similar to the arena in the movie Ender’s Game, but with a ball.

In this Astro Arena, objects suspended in the air which can be used as cover. A ball is spawned in the middle and both teams will have try and take control of the ball. Players will also have a grappling hook attached to their sidearm. Players will also be able to take out the opposition by shooting them which will stun the enemy for a period of time. Ball carriers can not shoot but can pass or drop the ball. Shoot the ball into the enemy spawn point to score and then the game resets. Each match will take place over seven rounds.

Although Cloud Imperium mention that Star Marine will be a more feature complete than Arena Commander when it launches for supporters, they are planning to continue to develop the FPS part of the game once it’s released and they’ve received feedback from the players.

In the past few weeks they’ve also made the decision to “revamp everything” including the network backend, improving character animations, and working on the zero gravity gameplay. Chris Roberts says they have been getting their “ducks in a row” after their internal testing of Star Marine. It sounds like they’ve had a lot on their plate.

The info that’s been posted by all the different studios involved with Star Marine shows a very polished looking shooter and this latest lengthy update also comes with a load of new videos to show just how far Star Marine has come in recent months. Check them out below.