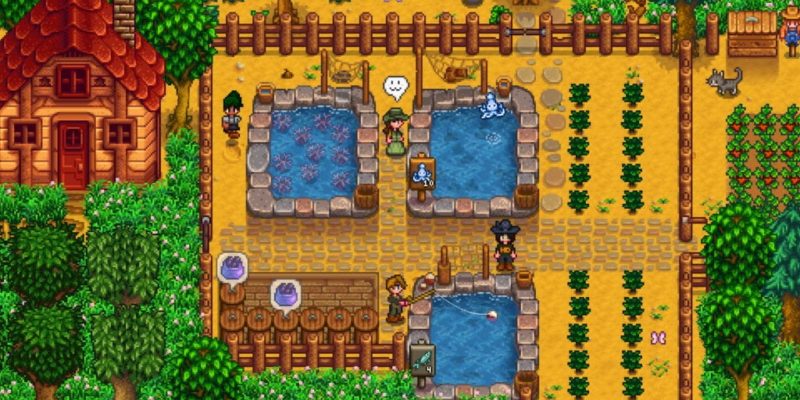 Developer ConcernedApe has revealed a new farm building coming to Stardew Valley 1.4. In the upcoming update, players will be able to raise fish and collect their eggs (roe) in ponds. The fish ponds will be a part of the new map currently under development.

The developer revealed the new ponds in a Twitter post early today. According to developer Eric Barone, you’ll be able to raise fish, collect eggs, and earn “other products” from the ponds. Hopefully that will earn you enough to fix that damn greenhouse you’ve been working on. Or not, actually, as the ponds will be a part of the 1.4 update, which comes with a new map for you and your friends.

“Another sneak peek into the upcoming 1.4 update… introducing fish ponds, a new farm building that allows you to raise fish and collects eggs (roe) and other products,” writes the developer in the Tweet.

Another sneak peek into the upcoming 1.4 update… introducing fish ponds, a new farm building that allows you to raise fish and collects eggs (roe) and other products. pic.twitter.com/52MFaP3Fjz

The next big thing

The 1.4 update looks to be Barone’s largest project yet. Prior to the tease in April in which Barone introduced the new map, called Four Corners, Stardew Valley had seen some major changes. The game received a much-desired multiplayer update. New monsters and events for players to tackle were also added.

However, it’s currently unknown when we will see 1.4 being implemented. Back in July, Barone wrote that more information on the update will be revealed following the console port of the game. According to Barone, there have been some setbacks. In addition to the fish pond announcement, Barone wrote that the porting company in charge of the project was experiencing “technical issues.”

Continuing, Barone wrote that the port could be ready in around two weeks. Whether or not we will hear more about Stardew Valley 1.4 is yet to be seen. Of course, we certainly hope so. I’m sure some are tired of heading to the docks to fish.

NBA 2K20 PC Technical Review: A “not so golden” three-peat

By Mike Straw39 mins ago
Hardware