I write this introduction from amidst the ashes of my StarDrive 2 empire. A coup, financed by war-happy industrialists, has crippled the productive heart of my young space colonies. History will puzzle over my hiring of a dapper elephant as my chief scientist, and perhaps question the choice to siphon off precious resources into the controversial “uplift elephants” project, but I stand by those choices. My administration will not bend to political blackmail. The Draylok race may be doomed, but my conscience remains clear.

StarDrive 2‘s portraiture may look familiar (save for one new, mandibled face,) but this sequel has quite a different structural take on the 4x genre. 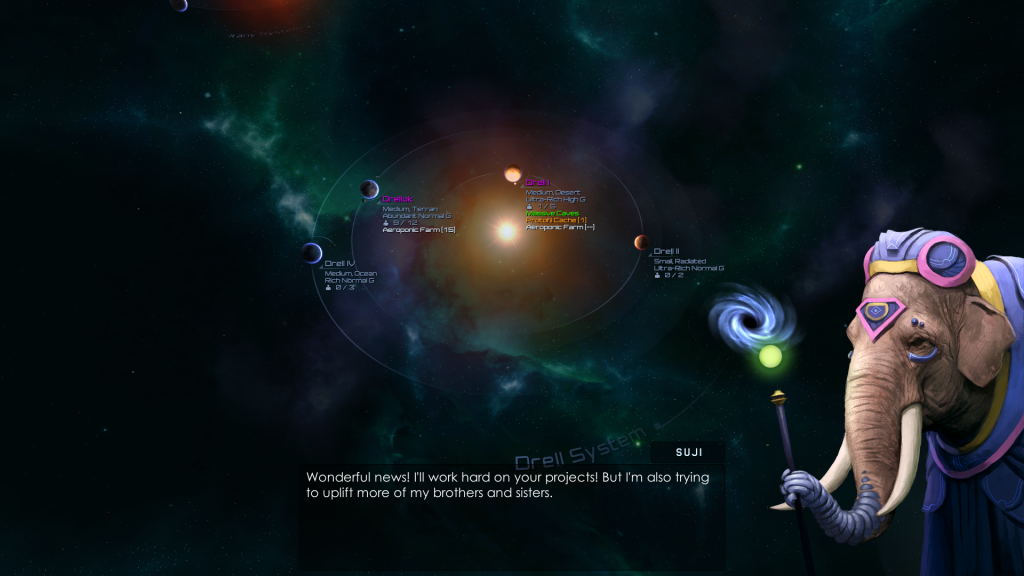 When presented with a scepter-wielding science elephant, I am going to hire him every single time.

The first StarDrive had a real-time universe, in which time ticked around constantly unless you stepped in to make use of the pause button. Ships and fleets out in the great strategic map of space would do battle if their paths crossed.

In StarDrive 2, the game is effectively on auto-pause and only starts moving along in real time whenever you move the ‘turns’ forward by pressing (or holding down) the appropriately named Space bar. If fleets meet in space, the game cuts away to a separate battlefield where the ships clash in the manner of a real-time strategy title.

Despite being set in a sci-fi universe, aspects of these conflicts resemble the ship battles from the more recent Total War games (better than Rome 2 though, in case you’re worried.) Larger vessels are the equivalent of a gigantic metal space-vault full of lasers, and turn about as swiftly too. Just like galleons of old, you can toggle the firing mechanism on all ships to deliver broadsides rather than forward aiming. These ponderous capital vessels can get swifter with technological improvements, but rapidity in battle is provided by fighter supports (launched from the bigger hulls) and corvette-sized units.

In-depth ship design returns from the original StarDrive and is just as exhaustive/exhausting (delete as applicable) as before. Beginning with basic grid-divided hull shape, it’s possible for players to pick and choose from any researched technology and design all manner of space variants. To avoid ending up with delightfully curated space brick and breaking your poor naval commander’s heart, minimum levels of power, ammunition and thrust have to be adhered to. For those who’d rather not spend hours playing ship inventory Tetris, preset designs are available. 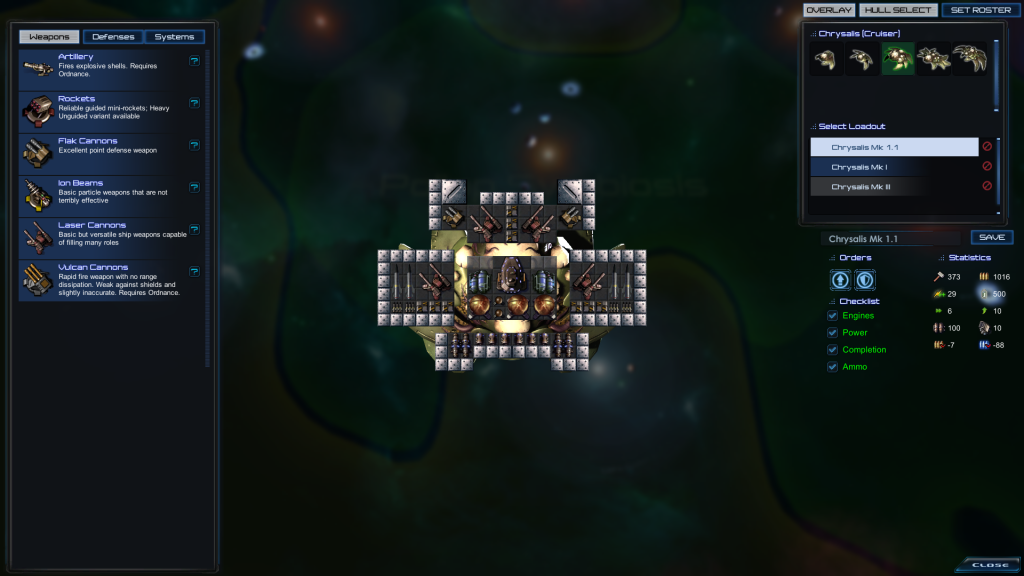 I appreciate the freedom to customise, but replacing every single piece of armour by hand can still get pretty tiresome.

Ship construction in StarDrive 2 can direct, or at least supplement, your tactics in the main battle sequences. In combat, vessels take damage to their outer components first (which, depending what’s housed there, can affect their functionality,) followed by the more vital inner workings (power reactors and the like.) Once the center has taken too much punishment, the ship explodes. If, for example, you’ve created a bunch of frigates with large amounts of frontal armour but little protection on the sides, you’ll have to use other ships to hug the flanks like little protective blankets.

Of course before you can build any of that stuff, you’ll need a functioning economy. Or at least an economy that’s imploding at a tastefully slow rate. In StarDrive 2, as with most 4x space games, scouting and colonising some resource-rich worlds is the way to generate all things of value. Planets (and habitable asteroid belts) come in all manner of shapes and abundance, along with occasional tantalising bonuses like mysterious mines or weird objects. Your work force won’t enjoy the irradiated soil and crushing gravitational penalties, but that ancient sprocket might make it all worthwhile.

Your new galactic empire can be given a helping hand with automated freighter shipments (assuming you’ve built some freighters – which you absolutely should,) and will hopefully be backed up by a robust science sector. This department will be pumping out all of your agricultural, military and socio-cultural improvements; even if you lack the incredible leadership foresight necessary to put an elephantine hero in charge of all scientific affairs. Research in StarDrive 2 is a fragile thing, because once you’ve selected something to learn, all the other items in that tier crumble away into memory dust. The only way to scoop them back up is to talk to a bunch of other outer space weirdos and hope they understand the concept of a fair tech-trade. 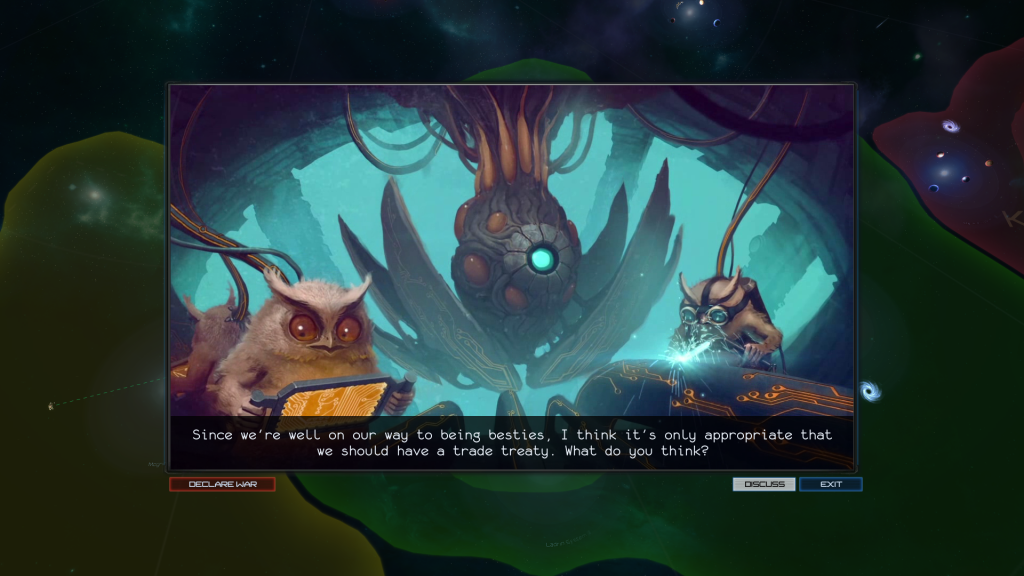 I think that’s a little informal for a diplomatic proposal and that you should stop enslaving owls, you monster.

In 4x games, I have a tendency to re-start campaigns when it looks like everything is either stagnating or actively sliding towards collapse. That means I’m not going to be reporting any late-game stuff in this preview, but it has given me a chance to mess around with several of the Star Drive 2 races. As already indicated, they’re the same as in Star Drive (right down to returning art work,) with the addition of the carapace-sporting insectoids, the Chukk.

The Chukk are malicious, fecund, polluters – but they signed a trade agreement and taught my Draylok people how to be better at farming, so they’re alright by me. Unfortunately, they were also an unrelated cog in that game’s downfall. The war-happy industrialists mentioned earlier wanted a jolly war with the Chukk. I didn’t fancy this, because the Chukk empire was quite daunting and the war-happy industrialists’ offer of 500BC (billion credits) would barely cover the cost of some handsome new wing-mirrors for my naval vessels. Let alone a war fleet.

Having rejected their offer, they showed up on my doorstep with a collection of ships well in advance of my own and started breaking things. This seemed a touch unfair, as it meant my choices were either that or “start an extremely foolish war.” Still, it’s a beta build, and it’s encouraging to see an increase in random narrative events from the first Star Drive. 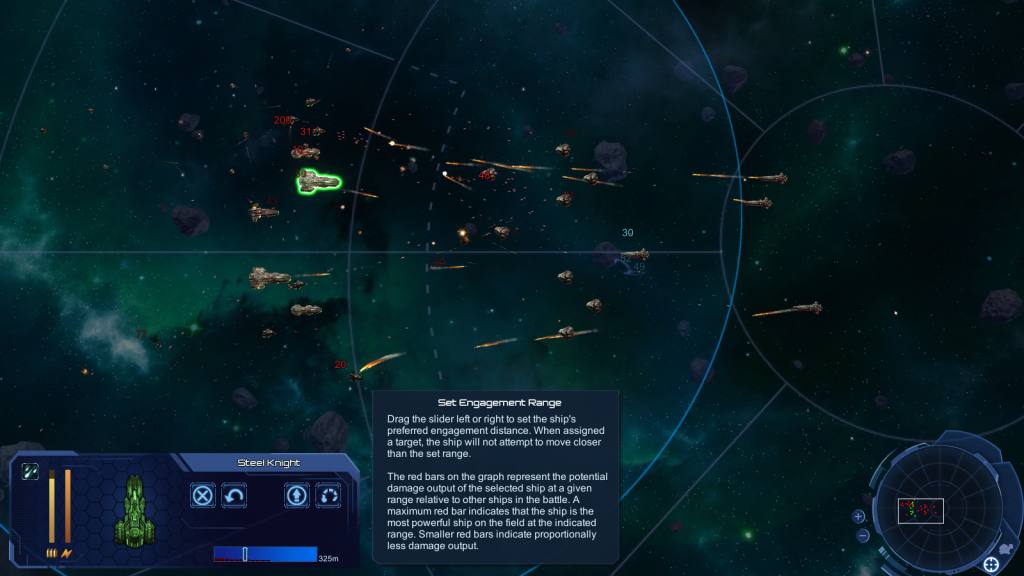 Engagement range is another of those in-combat things you can play with. It determines how close enemy ships can get before you propose marriage.

My most recent (and ongoing) game is with the Pollops. They’re a race of sentient plants and have the most adorable spy units – literally just a pot plant with some eyes peeking over the side.

StarDrive 2 has a decent line in species design, be it arrogant mollusks who enslave cute owl creatures or intergalactic bears who take their feudal samurai code very seriously. During play, each race has a unique set of ship designs and specific skills for ground troops, with the other distinctions being stat-based in nature (weaker warriors perhaps, or a fertility bonus for population growth.)

It’s possible to create your own custom set-up from a sizeable list of pros and cons, but Endless Legend has set a pretty imposing bar in terms of 4x faction design and their direct impact on style of play. Though perfectly well defined in terms of their characteristics, I’ve yet to find any of StarDrive 2’s nine options play as uniquely as Endless Legend’s Cultists (only one city) or Roving Clans (no official army, moveable cities.) Well done Endless Legend, you’ve slightly ruined 4x faction design for everybody else.

Playing as talking plant creatures certainly has plenty of charm though, especially when you realise they use bizarre motorised platforms to propel their troops into turn-based ground combat. Ground troops don’t have the same dizzying array of customisation options as ships in this game, but you can kit them out with a near-overwhelming selection of default and researched items. Sending an invasion force to an enemy planet or to board a drifting space hulk will trigger a separate turn-based mode. These feel a bit sparse, lacking the nuance that a dedicated turn-based tactical game would bring (for obvious reasons, they’re a side-feature here,) but offer a more palatable alternative to bombing a planet so hard that even the rocks are complaining about war crimes. 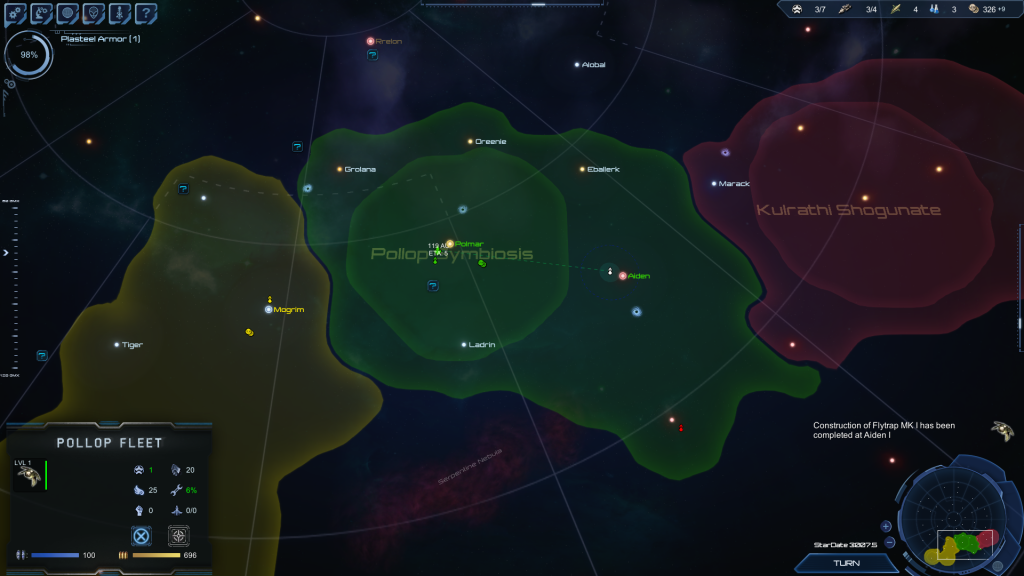 The more overtly turn-based structure (which shows you how many ‘turns’ a fleet will take to reach a given destination,) separate real-time battles, and the newly transparent diplomatic wranglings are the most significant changes introduced by StarDrive 2. There appear to be more random events (like wealthy industrialist war pressure) to deal with and space anomalies to investigate, as well as the evident visual benefits of switching to the Unity engine.

StarDrive 2 also adds a Battle Arena mode, which in this preview build had a couple of multi-mission battles and the option to set up your own customised combat scenarios.

Beyond that, my first impressions are of a sequel where the policy of “keeping what works and altering the rest” is in effect. Aspects like custom ship design and colony management are very similar (or even the same) as the original title. As mentioned, the factions (save for one addition) are the same as before too – though can be customised with traits of a player’s own choosing. It probably won’t cool the ire of those who are still peeved about cessation of development on the original game, but for everyone else StarDrive 2 is looking like a more refined title.

StarDrive 2 will be released on 9 April.