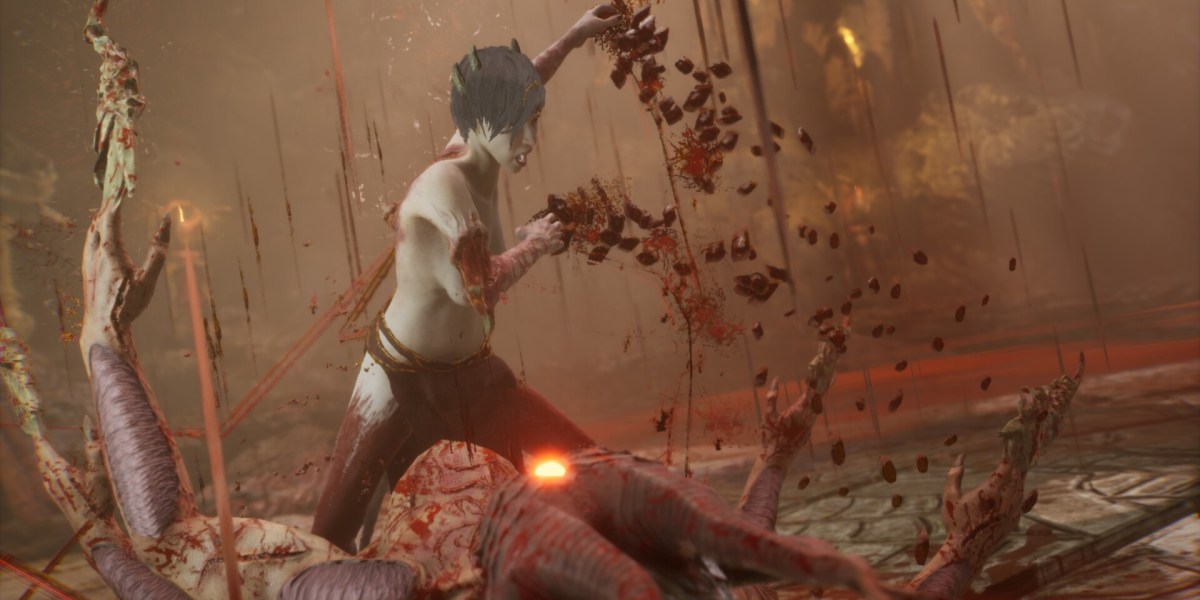 For a long while, I was under the impression that Succubus was less a game and more smut in a video game package. However, after seeing a press release that described it as publisher PlayWay’s most anticipated game yet, I decided that maybe I should give it a look before judging a book by its fixation with breasts. I meant cover. While Succubus is quite possibly the most offensive game I think I’ve ever seen (and it does have its share of pornographic content), it’s a legitimate first-person melee game with surprisingly good graphics and an enormous amount of blood-soaked carnage. As a warning, this is a review of a game that contains content many will find disturbing, and is intended only for mature audiences.

The main character in Succubus is clearly meant to be ogled, there’s no way around that. Strangely, the game is exclusively in first person. So, if you’re looking to buy the game to stare at the protagonist, you’re not going to be doing that as much as you’d imagine. The main character isn’t even much a succubus, it seems. Succubi are demons that nourish themselves by draining the life force of their victims through sexual congress. The succubus in this game mostly nourishes herself by constantly and violently tearing apart literally everything she sees. She can occasionally heal herself via sex, but this happens about three times in the entire game.

The story isn’t all that good, but it doesn’t matter that much. Your succubus is in a relationship with Nimrod, and the two have a lot of power in hell. But the demon Baphomet shows up and threatens his reign, so it’s your job to just fucking lay waste to thousands of humans and demons for hours on end. Succubus has admirable production value, and the cutscenes are typically well rendered and capably voiced. I expected the main character’s voice to be sultry, but she instead sounds more like Eartha Kitt in The Emperor’s New Groove. She has fun with the constant malice, at least. Succubus lets you customize your character to your liking: face, body, hair, horns, and outfits. Once again, it’s completely in first person. The game is divided into roughly 20 stages where your goal is to fight your way through and get to the exit portal. Your objectives are actually quite varied. Yes, you often slaughter waves and waves of enemies, killing a couple of hundred per level, depending. But you also destroy certain objects, defend statues, or maybe kick a specific enemy into a giant creature’s digestion pools. That won’t make sense out of context.

Each level has three additional quests you can clear to make the area glow on the map. There are also collectibles to find, including comic book pages that let you read an actual comic book made just for the game. And it’s pretty decent too! Levels can take upwards of 20 minutes to beat, so Succubus isn’t an extremely short game. It took me about eight hours and I didn’t reach 100% completion. There are also a couple of extra-hard leaderboard levels that you can play, although they have set loadouts, so you can’t bring your own stuff.

Succubus is all about bringing your own stuff. There are a bunch of different weapon types, including dual daggers, scythes, staves, hammers, a daggerbow, and swords. You can equip three at once and new, stronger weapons show up in the store as you progress. Gather human and demon souls by killing enemies, and then use them to purchase both new weapons and armor. You obviously don’t get to see the armor much, but it has different stats, such as health and power charges. Each armor also has different powers, with the best one in the game being locked to just one specific outfit. Powers can be quite fun to use, although you’ll often just use them to burn things. There’s also a shield power, if you want. Granted, you won’t need a shield much; Succubus is a crowd fighter. You’ll generally fight a bunch of enemies at once and they’re typically quite weak individually. You’re encouraged to get right in their faces and hack away at them while they do the same to you. After taking a bit of damage, enemies glow yellow and you can use a finisher. Doing this will heal you for half a health chunk. The finishers are gruesome: decapitations, vivisections, bisections — they’re all here, all the time. This is one of the most violent games I’ve ever seen.

But the combat is just fun. It’s not complicated at all, but just slamming your weapons into a horde and eviscerating everything around you does its job. The staves are my favorite weapons, as they have range and offer a lot of crowd control. If anything, they kill enemies too quickly. It’s wild to tear into your foes, back off, and then use flamethrower or spark to melt them. You can do a little dash by pressing the space bar, which is effective at getting you out of danger.

There are four difficulties to choose from, and Succubus is pretty easy on normal. I think I died one time throughout most of the game, save for one level that was just a mess. See, sometimes you need to use explosive eggs to break things. These parts suck because you can pull the eggs to you, but you can’t just carry them. You can also kick them around, but they explode randomly. The level in question required me to blow up two things while spawning exploding enemies and flying ranged enemies simultaneously. Then, it followed it up with two tough enemies. It’s the worst part of the game. 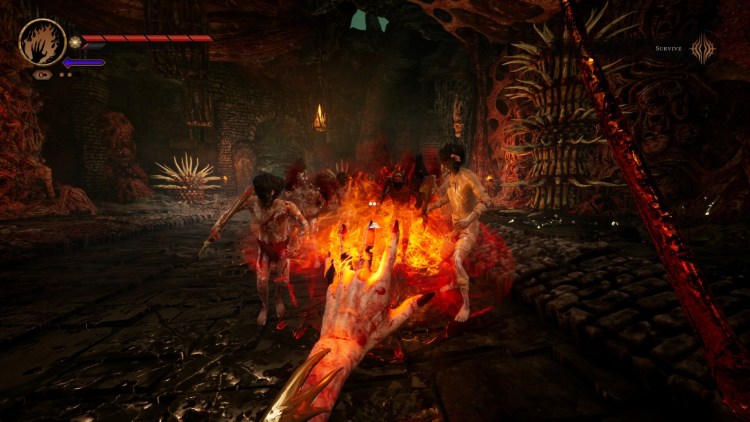 The ticket pays for the whole seat

There are several boss battles, too, but they’re all just as easy. One boss does require you to hit it with eggs and is the worst fight, but the game is lenient enough with it that it’s not too bad. You can mostly just walk up to bosses and wail on them ’til they die. Outside of finishers on foes, there are other ways to heal. You can kill any errant humans or baby demons in the area and steal some of their life. Or, you can torture a man or a pregnant woman. And yes, it’s horrible.

I would typically avoid healing this way, as the accompanying animations are truly disgusting and feel way too edgy for their own good. It just feels like the developers were trying way too hard with these and, well, they succeeded in making some of the most reprehensible shit I’ve seen in my life. Good job, I guess? Some of the sex scenes are also laughably animated. One of them is extra disgusting and features a female demon that looks as if it’s been flayed. Gross.

Occasionally, prompts wouldn’t work correctly, but that was mostly in one level. I didn’t find Succubus to be a particularly buggy game. The graphics are mostly excellent, with high-resolution, detailed textures and tons of creepy, hellish assets. They really made the place feel like Hell. The levels mostly look varied from one another, too. Sure, I could go on about how offensive the game can be, but most of the people looking to buy it aren’t going to care.

Nearly everyone you ever see is naked with full-frontal nudity included, but you’re in hell, after all. I can’t imagine that Lucifer would pass out pants. If you play the censored version of the game, though, you won’t see much of any of the things I’m mentioning here. If you just want the action, that might be a better bet. Also, the game is 60 GB. I don’t know why. Optimization isn’t all that great, but it fluctuated from 40 fps to around 100, so it varies wildly. What we’re left with is a fun game that people who like first-person hack-and-slashes will appreciate the most. Okay, maybe not the most. Granted, it won’t have widespread appeal for obvious reasons. But it’s far better made than what was probably warranted, and I had a good time when I didn’t want to soak my head in a bucket of bleach. I wish there was a non-ranked, easier survival mode that I could take my own loadout into, as the leaderboard forces the use of weapons I don’t like, but maybe they’ll add that. I mean, you can saw someone cut in half from behind with a sword, so an extra survival mode doesn’t seem like a lot to ask for.

It's insanely violent, it's reprehensible, and it's unashamed. Succubus may not push any gameplay boundaries, but it's one hell of a good time as long as you have a cast-iron stomach.

Rainbow Billy: The Curse of the Leviathan review — A tale of friendship