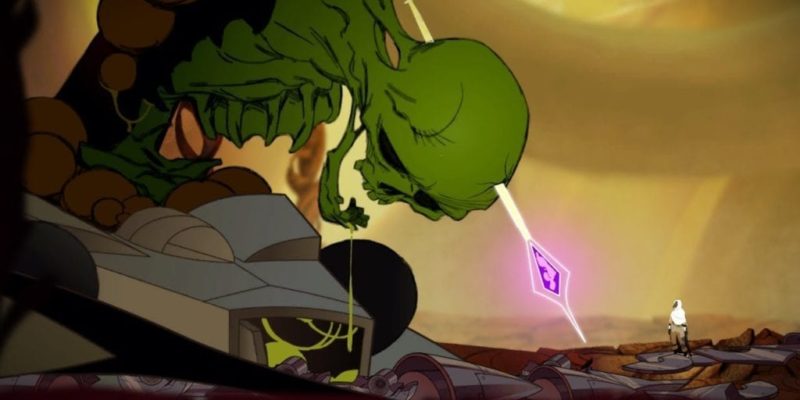 Disclaimer: A code for the game was provided by the publisher for review purposes.

The 2D platformer genre has sprawled from humble roots. The genre was essentially born in the early days of gaming mostly due to hardware limitations. Since then, games like Castlevania and Metroid expanded on the exploration aspect of the platforming genre, creating panning views of an entire level, from left-to-right, and most notably, vertical climbs. Without the foundation built from games like these, Sundered would probably not exist.

Thunder Lotus Games isn’t exactly a household name. The studio is fairly new, but that doesn’t mean their abilities or products are not polished. Even if the name of the studio isn’t immediately recognizable, something you might recognize is Jotun, the studio’s first game.

Having never played the Jotun, even I was aware of its release as I felt like I was seeing it promoted everywhere. One thing that caught my attention was its unique art style. The hand-painted scenes created a stylized depth to a 2D environment, particularly with its use of water color-type smears. Although I have only viewed the game trailers and gameplay videos of Jotun, it is fairly obvious that the same focus on animation, depth, and style are the driving force behind the games that are produced by Thunder Lotus Games.

In Sundered, you play as Eshe, a gypsy-like wanderer cloaked in a hood and cape. The same theme of cloaks and darkness are carried throughout the game, with most of the enemies bearing similar designs. I felt that the different worlds mirrored this feeling of being shrouded in darkness and the enchantment of discovery that lie ahead. There’s also a steampunk essence to it all, having mechanized robots and centurions draped in cloth while flying in with their jetpacks and blasters.

Underneath Eshe’s cloak, she wields a fierce blade-type melee. Additional moves in your skillset are the dash and jump. During the course of the game, new abilities and buffs can be purchased in the skill tree, expanding like wild roots. While the double-jump ability isn’t available at first, it does seem necessary even at the start of your journey, something that I would have liked upon starting.

Unlike the double-jump, your other abilities will develop the course of the game. Strikes from your weaponry will gain damage with each small percentage unlocked. New moves will become available when a boss battle is completed and shards are collected. These pieces are part of the story as they carry a dark connotation to them, and more of the story about Eshe’s humanity is revealed through these small narrative points. Boss battles are one of the major ways to progress the game outside of the platform traveling that you will be doing. There are challenges littered throughout the game that will keep you on your toes, and literally dying to come back for more.

The skill tree seems ever expanding.

One of the main focal points in Sundered is the expansive ability tree that you will grow. But, in order to bank points to spend, you must send yourself out into the fray. Death becomes imminent as you continue to gain new skills in order to combat the onslaughts of enemies you face. Each time you return to the Sanctuary, the starting point after each death, you can then tweak and add new buffs if you’ve got the dough. If not, it’s back out into the world to grind, grind, grind. There is an upside to this legwork, though.

At the center of the Sanctuary are slots where perks can be assigned. You will unlock a number of different additives to aid you on your journey, those being perks, and they can also be leveled up when in use. Things like bonus treasure drops and shield regeneration can be assigned to any of the three available slots. However, each comes with both positive and negative attributes. You might get a 10% stackable damage on enemies that you kill, but you might also lose something like 12 or 16 points from your health when choosing this perk.

The skill tree itself was something that I found myself struggling to like. On one hand, the sporadic unlocks and upgrades to things like health and shield are refreshing. This means you could unlock a 10% increase in your cannons damage, followed by something like a 10% increase in your health bar. Other games organize these into categories like Health, Magic, Combat, etc., but I found myself looking for things that I had intended to unlock in the first place, forgetting what I was doing altogether. While nice to move about its branching tiers, the system wasn’t as uniform as it could, or should, have been.

Outside of the skill tree’s organization, the perks seemed somewhat lopsided during the initial hours of the game. As the skill tree outside of these perks began expanding, the taxation for their use decreases.

Each unlock comes at a cost of points. These are earned by smashing objects, defeating enemies, and finding corrupted treasure. Corrupted treasure balls are rewarded by scouring the cavernous routes that make up Sundered. Once I was able to reach this point of the game, things started to open up a little bit more and become relatively more fun. The challenge of overwhelming enemies never really seems to let up, but also never quite finds its sweet spot between attack power and enemy difficulty.

When new abilities are learned, like the cannon or double jump, Eshe can now reach areas that couldn’t be traversed before. New treasure and level progression are the payouts for exploring these areas. And, during exploration, you can bet that at any given moment, a swarm of enemies could be heading your way. This is essentially what the game is comprised of. You’ll find yourself fighting, dying, buying, and then reliving the process all over again once new items and unlocks become available.

This is one of the areas that I found to be frustrating at times. When you’ve saved, battled, and saved to get an unlock that could help you progress, your journey can be halted from onslaughts of enemies. You could go room after room without running into an enemy. But then, just as you are starting to get back to the previous point in which you died, a flash-flood of creatures, both airborne and ground, will rush your position. There’s a feeling of accomplishment when you’ve cleared a room and gathered your treasure. However, when it impeded the progress of the game, I often found myself setting my controller down and coming back to it hours later.

One of the most impressive and polished aspects of Sundered is found in the animations. The hand drawn style is clean, detailed, and welcomed. I couldn’t help but notice the tentacles, masks, and machine parts on all types of enemies. Each slithers or crawl animation is carefully crafted, much like any animation having to do with Eshe or bosses. The level design stays true to the metroidvania style of play, but I would have easily opted for a stationary map instead of a panning view of the level.

If you’re a fan of the metroidvania genre of gaming, Sundered meets all the requirements. The animations are detailed, offering authentic and original enemies.

I did find that grinding to develop your skill tree can be cumbersome at times, leading to some frustrating moments just to progress only a few rooms. Even with the perks and abilities becoming a daunting task at first to develop, I did feel that leveling up perks and progression was fairly balanced.

Sundered is a great secondary offering from Thunder Lotus Games. Be warned, you have your work cut out for you. If you’re up to the challenge, let your wallet be looted and plundered by the likes of Sundered.