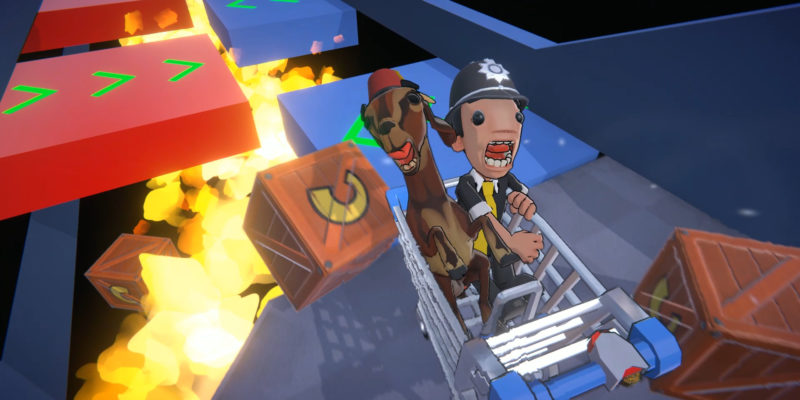 Supermarket Shriek is a co-op party game where the aim is to navigate a series of obstacle courses. The twist? You have to do so with just a man, a goat, and a shopping cart. But thankfully these two are no regular man and goat. They both possess a supersonic voice box that can create forward momentum by just shouting at the top of their lungs.

Yelling as the man makes you turn left while yelling as the goat makes you turn right. In order to move directly forward, you’ll need both of them to yell in unison. You don’t have the luxury of braking, so managing your momentum through the corners is a must. 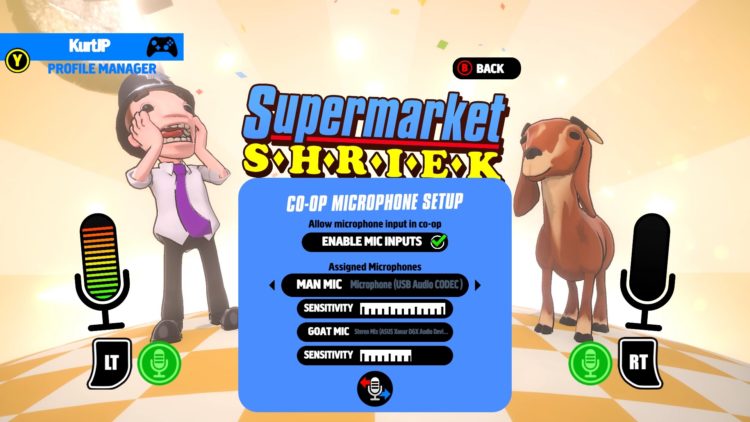 Although you can use a controller, Supermarket Shriek is best played with your vocals.

You don’t have to yell, but you should

Although Supermarket Shriek plays perfectly fine on a controller, it is more fun with two microphones and a friend. By yelling into the microphone, you’ll be able to control one character each. It may not be the most efficient way to play, but the sheer potential for hilarity is hard to ignore.

Having you and your friend sit there yelling to control your cart is good fun and sure to produce some golden moments. It’s a shame that there’s no online multiplayer support, but I think Supermarket Shriek is best played locally anyway. You’ll just need to have two microphones available to get the most out of it. And try not upset your neighbors too much.

Making a name for yourself

The main campaign mode uses a world system featuring a total of 38 stages. Each world features four regular stages, followed by a grand finale stage that’s needed to unlock the next world. The events available are Obstacle Course, Grand Prix, Canned Carnage, and Shopping List. Obstacle Course is a straight forward time trial game mode, where you can earn up to three stars depending on your time. A certain amount of stars are needed to access new worlds similar to the old school Mario titles.

Grand Prix sees you partake in a head to head race versus an A.I opponent. There are a total of three different checkpoints to cross. You’ll need to stay ahead for all of them to earn three stars.  Canned Carnage is a time-limited event where you need to navigate a store and collect as many cans of beans as possible. You do this by crashing your cart into pre-stacked piles of them. On the way, you’ll also be required to grab time extensions before heading over to the exit to finish. 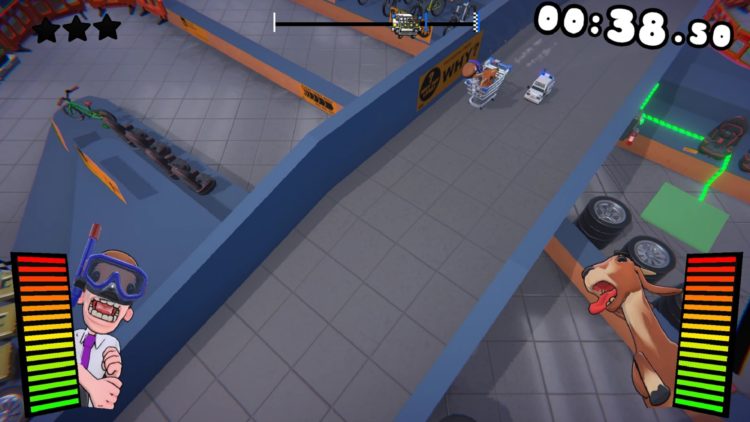 The Grand Prix most is underutilized. It’s really fun and gives off a Micro Machines vibe but very few events use it.

Finally, there’s Shopping List. This is more of an endurance event of sorts where you’re required to collect several listed items and then deliver them to the end as fast as possible. These tend to be the trickiest of all since the levels tend to be a little more complicated.

This structure works okay as it’s easy to understand, but there were times where I was left wanting more from Supermarket Shriek. In some worlds, there can be back-to-back-to-back levels that use the same game mode, which gets repetitive. I can understand there’s only so much you can do with the premise, but a little more variety would have been appreciated.

It’s not every day that you come across a self-proclaimed party game that is this hard. Early on, levels are easy enough and will rarely take you longer than five to ten minutes to figure out. In some cases, you might even get all three stars on your first go.

But once you hit around the fifth or sixth world, the difficulty spikes massively. All of a sudden you’re dealing with fast chicanes, one-shot kill buzzsaws galore, and increasingly lengthy levels. And keep in mind there are no checkpoints. Failure means you start over from the beginning. 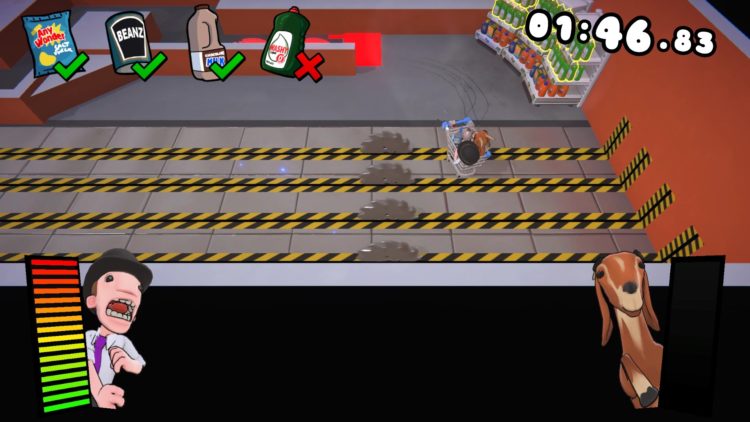 Some levels overstay their welcome and drag on. A simple checkpoint system would have gone a long way to alleviate this.

Perhaps this was intended and Billy Goat Entertainment was trying to offer a challenge for its players to overcome. But frankly, it just feels out of place. How you can go from mindless, screaming fun to intense obstacle dodging in less than an hour of gameplay is beyond me. This drastic change in difficulty feels jarring and makes it harder than it should be to figure out who Supermarket Shriek is trying to appeal to.

You could consider it to be more engaging for those looking to play this single-player, but I don’t think that’s such a good idea. Honestly, this game just isn’t that fun on your own. It’s good, but the simplistic premise is best enjoyed with a friend or family member. Attempting to tackle this alone will probably see you getting bored rather quickly.

The power of friendship

If I was to score Supermarket Shriek as a single-player game, then this review would have taken a negative turn long ago. In many ways, I’m grateful I had someone willing to play this with me, because my initial experience playing alone was dreary at the best of times. The concept is unique and fun but it doesn’t take long for the gimmick to wear off.

However, as a co-op game, Supermarket Shriek has a lot more to offer. Even though I can’t imagine most players getting more than a few hours out of it, that’s enough to have a good laugh with a close friend. Given that it’s not worth playing with a controller, the requirement of having two microphones may be awkward for some. But assuming you have a willing friend and some spare mics at hand, you can’t go wrong with at least giving this a go.

While certainly unique and interesting, Supermarket Shriek does have its limitations. As a single-player game, it struggled to keep my attention and the gameplay is fairly repetitive. But if you do have a spare friend and a couple of microphones to use there's potential for some good fun.