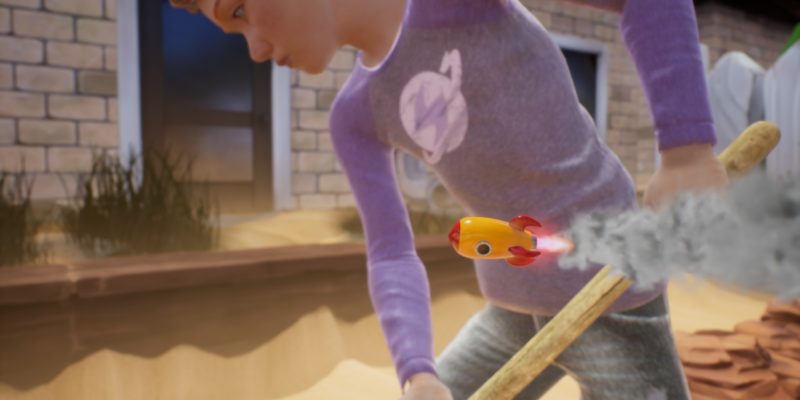 When it was announced that Supraland was to set to get not just one but two DLC releases, I assumed they’d be bite-size additions that added on to the main campaign. As more details started coming in about Crash, however, that was proven incorrect. This isn’t a little add-on at all. It’s bigger and more substantive than many entire indie games, which is an insanely impressive feat. Not only that, but it differentiates itself from the main campaign in a lot of interesting ways.

You’ve really made the grade

Supraland‘s Crash DLC starts with the Red Prince setting foot in a little rocket. As he’s a toy, we see said rocket being carried around by the child who built the game’s literal sandbox. But the rocket, as you’ll no doubt be shocked to find out, crashes. Our hero lands outside the town of Orangeburg, which is home to all orange toys (although there is no mention of the rightfully-incarcerated orange prisoner you meet in the base game).

Shortly after finding his way into the town proper, he meets a scientist who has built a rocket. It’s up to the prince to help her and her assistant finish the rocket and find his way home. There’s more dialogue in Crash than in the base game and much of it is very funny. I frequently found myself cackling at not only the text but at the huge amount of visual and design jokes that permeate the game. Suffice to say, the designer has completely outdone himself in regards to focusing his use of humor. 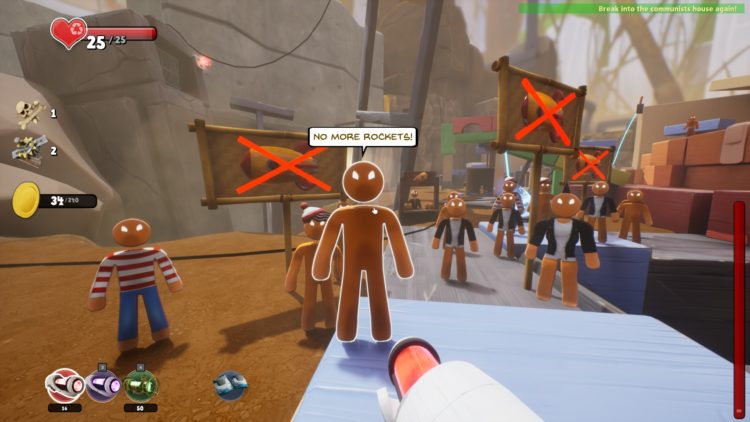 But that’s not all that’s been honed. Crash might seem like a sequel at times, but it is an expansion, so it wasn’t going to match the scope of the base game. While the main campaign’s world is huge and sprawling, the map here is much smaller but more densely packed. To put it simply, even though you won’t cover as much ground, the amount of things to see and do in nearly every corner of the map is a sight to behold. Puzzles, secrets, NPCs, and jokes can be found everywhere. There’s even a recurring collectible that you can pick out from a distance —  a toy version of Waldo/Wally, and the dude gets around.

This all leads to a very stark difference in terms of Crash‘s design philosophy. Instead of setting off on a journey towards the next big McGuffin like before, you’ll instead be hunting for objects like in a ’90s collect-a-thon game. These come in two varieties: bones and scrap. Bones are dropped by skeleton enemies and are found all over in the DLC’s first area and they’re used to unclog pipes, while you’ll need scrap to build rockets.

The general structure sees you solving puzzles and hunting secret areas to find enough of each to move onto the next section. Treasure chests with health upgrades and the like are still here too, although there are far fewer of them. The same goes with coins, as there isn’t nearly as much stuff to buy.

However, there’s a negative to this level of conciseness that isn’t present at all in the base game. Simply put, you’re going to go back to the same areas several times. As Supraland is a Metroid-like, this is to be expected. But the degree of repetition can almost seem like padding at times, which would be very annoying if the puzzles, gameplay, and general game design weren’t of such high quality. But it does drag the game down a bit. The base game had me constantly eager to see what was next, but I dreaded finishing a section in Crash, as it meant that I’d be returning to the starting area and accessing puzzles by utilizing new abilities. 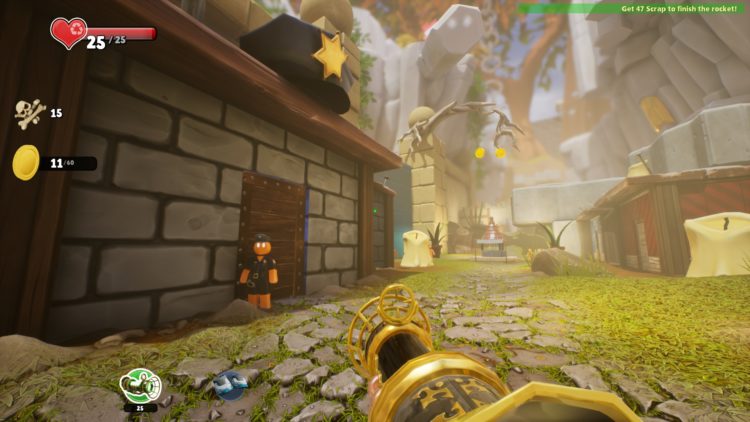 The differences in Crash don’t stop with structure — it just goes about things differently. The Red Prince gets all of his gear stolen at the beginning of the DLC, but the order in which he gets it back is completely different from the order he gets it in the main game. For instance, one of the neatest items in the base game is the translocator gun that allows you to switch places with the ball it fires, which you don’t get until the end.

Here, it’s the first thing you get. Only, it’s just the ball and the teleport element has been removed. You get it back eventually, but that’s not the only item that’s been changed. The DLC truly does a fantastic job of making you use items in a way that you didn’t get to in the base game.

Then there’s combat. While the main campaign gave you a sword and gun early on and would often have you encounter enemies regularly in the world, there’s barely any fighting in Crash. The only item the prince keeps is his stomp boots and you’ll be using those to fight for the majority of the game. All of this makes the game feel very separate from its forebear, which is very impressive and not at all common for a DLC to do.

And on top of all that, the puzzle design is still as brain-bustlingly clever as ever. The insane amount of creativity on display with these is stunning at times, even if they can still be poorly signposted. Sometimes a puzzle would show up and I wasn’t even aware that I could do the thing required of me. Other times puzzle elements are hard to notice in the first place. You’ll possibly spend a fair amount of time wandering the area and feebly trying the huge amount of stuff with limited direction until you finally figure something out, which always feels rewarding. There are more hints this time around, mainly in the form of two NPCs, but getting stuck is still a very real threat. Despite this, not all the puzzles are mandatory and you can finish the game without solving them all. You can pick and choose and still find enough items to move on, which was a great choice. 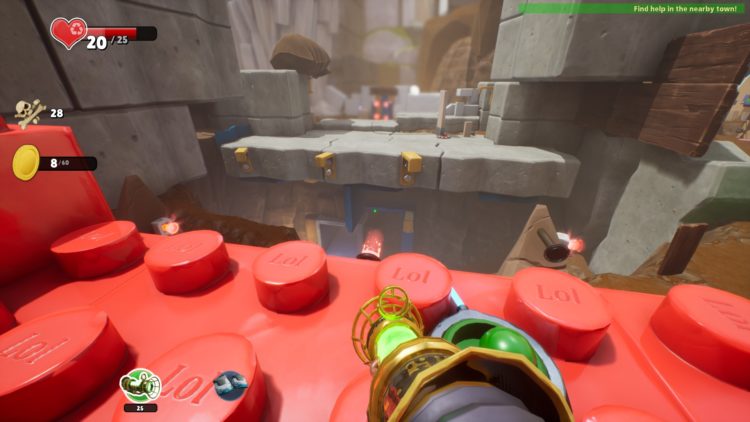 Coming in for a soft landing

Crash took me about nine hours to complete, which is kind of shocking. There’s enough content here for a complete, stand-alone game, let alone a single DLC. And I didn’t even find nearly a third of the stuff. I will say, though, that the very end of the game had some awful performance issues, as I went from full FPS to 15 or so for the entire finale. There are some issues with the pacing and repetition can sour things a bit (if I ever have to race Rod again I’m going to literally start screaming) but none of that is nearly enough to put a damper on this DLC.

It’s hilarious, extremely entertaining, and excellently-designed for the most part. Anyone who enjoyed the base game will like this, too. Some should even like it more. I just hope I don’t have nightmares about rockets crashing and running puzzle races. 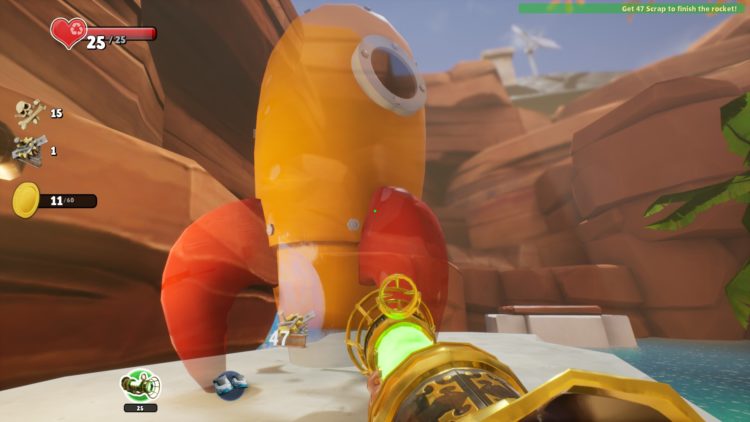 Supraland's Crash DLC is hilarious, entertaining, and definitely worth playing for lovers of Supraland, repetition be damned.