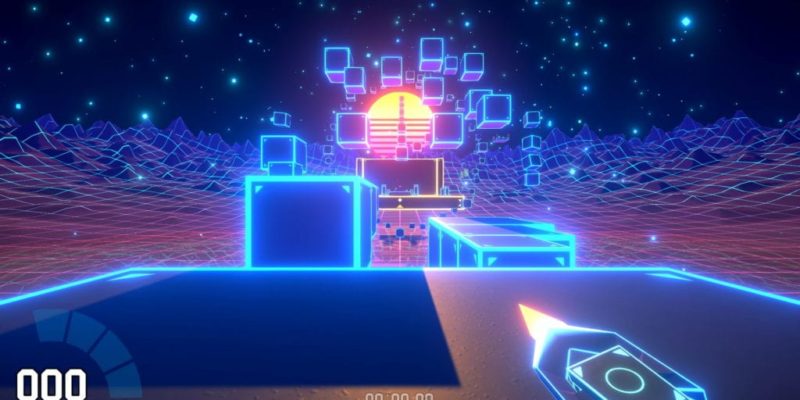 Outrun and swinging mechanics collide in Cyber Hook, which was announced earlier today. The game utilizes high speed and parkour along with a grappling hook to fly through a retrowave-inspired world. Oh, and you also have a finger gun that shoots stuff, which my inner child thinks is really kick ass.

Cyber Hook is all about blasting through a cyber world in blistering speed. From the trailer, you zip along with a grappling hook, taking hard corners and using momentum to fling you from platform to platform. While you swing, you use your free hand to help you traverse each level. You can use it as a gun, turning unusable green boxes to blue, allowing you to continue swinging along. And of course, you can also blast through any green boxes and enemies in your path with a finger gun. No, you don’t gain points for shouting “pew, pew,” but it won’t hurt.

There’s plenty to see in Cyber Hook. The game will include more than 70 levels to fly through, and a leaderboard which you can use to compare times and push yourself to go even faster. Cyber Hook also has some post-game features, such as the ability to play through the game while controlling time and “breaking the level design,” according to the press release.

“We’re excited to team up with Graffiti Games to bring this amazing 3D platformer to PC early next year, and we know platforming fans will love it too,” said Théo Touaty, lead developer at Blazing Stick, in a press release. “The game offers an array of tools and abilities for players to determine what works best for them to speed past enemies and other trials in order to make it to the finish line.”

As a retrowave fan, I’m loving the look of Cyber Hook. I can’t speak much for the gameplay as I haven’t played it myself (but it does look fun). However, I’m a sucker for the outrun motif, and Cyber Hook looks like an animated celebration of the best retrowave album art.

Cyber Hook doesn’t have an exact release date yet, but it will be available early next year on PC via Steam.