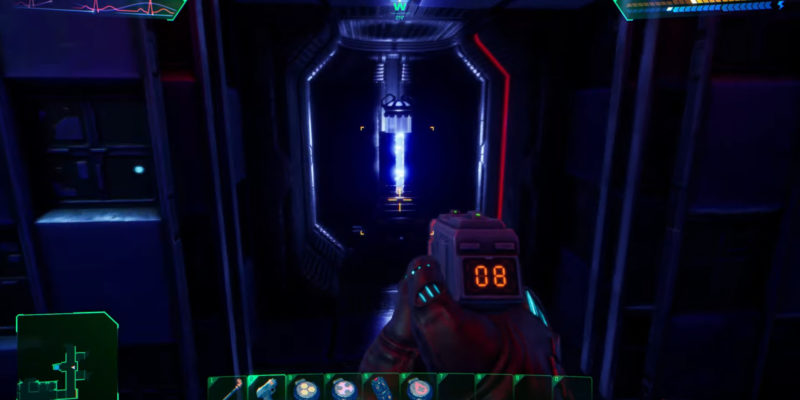 ‘Calming’ is rarely a word I’d use to describe a series like System Shock. “Horrifying,” maybe. “What the hell is happening?”, another. But never calming. And yet, I can’t help but to feel nice and relaxed watching the latest trailer for the System Shock remake. It combines monster hunting in space with some soothing elevator music. Somehow, it makes it work.

The System Shock remake is still well under development. That’s at least one thing we can confirm with Nightdive Studios dropping a new trailer. The game managed to collect $1.3 million in backer funds, despite development getting a little sketchy.

Sadly, the trailer itself makes no mention of a release window. The Steam page still lists it as a 2020 release, but the trailer is geared more toward reminding us the alpha demo exists. Back in May, Nightdive released a Steam demo for the game. It allows you to experience around 40 minutes of the System Shock remake’s opening act.

Naturally, it’s still the best way of seeing first-hand just how the remake stacks up. Killer robots, nosy security cameras, and more await you in the demo. The trailer above shows off a little more of the Citadel Station, along with some combat and explosives for good measure.

The System Shock remake is looking rather nice, thankfully. Regardless of any development issues, the game is looking great. Plus with Terri Brosius returning as the malicious AI SHODAN, you know you’re in for an authentic experience.

While development for the remake is still going strong, we’re not as certain with the third game. System Shock 3 development has been anything but smooth, as word that some of the development crew may have vacated. Still, the studio persisted, and is now owned by Tencent.

We’ll have more on the System Shock remake in the near future.

Carve a path of vengeance in No Place for Bravery

Persona 4 Golden out now on PC