My continued problem with reviewing episodic games continues, insofar as I’m still not sure who I’m writing them for. Am I writing them for people who played the first episode? Well, that’s likely! But… well, they can just play it for themselves; you can’t buy the episodes individually, after all. So am I writing for people who didn’t play the first episode? Well, that massively limits what I can talk about without spoilers. 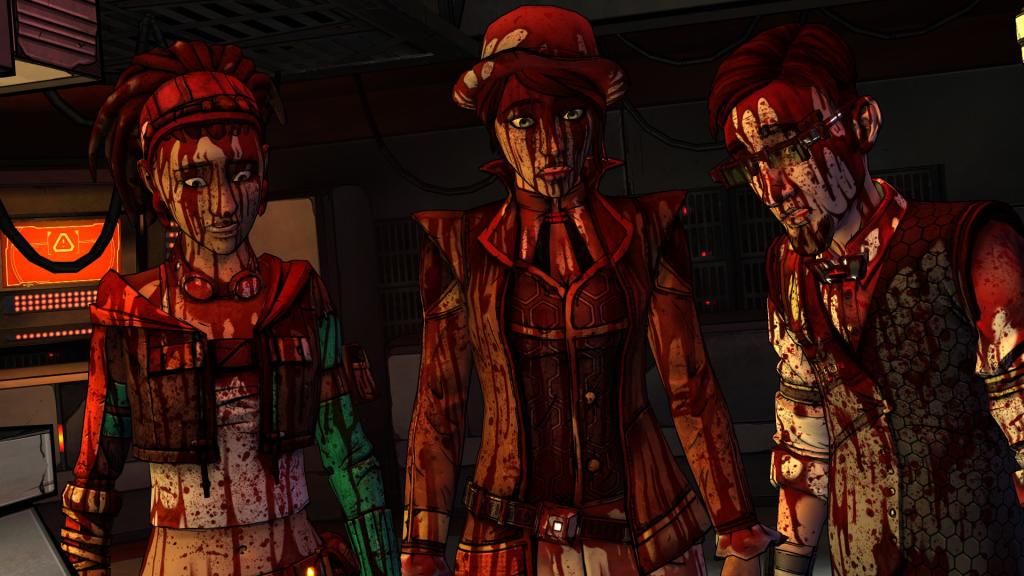 I’m going to try to tread halfway between the two. I am going to have to give away one of the Big Things from the first episode… but if you’ve looked at any screenshots, key art, or the trailer for episode two, you already know it. Consider this your final warning if you want literally nothing spoiled. (And if that’s the case, I’m not sure why you’re reading this anyway.) 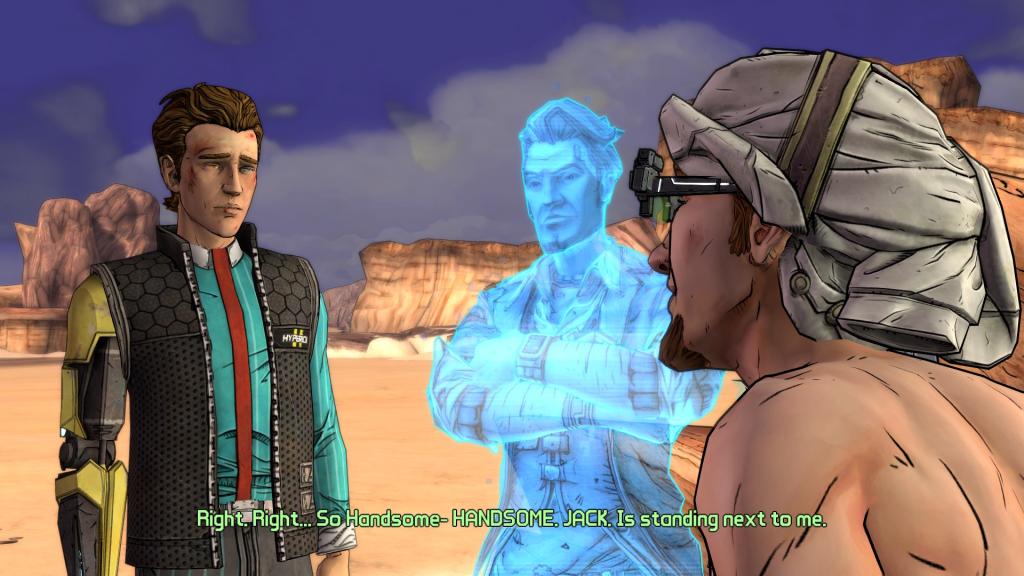 Not that believable, I know. Not unless you’ve seen any of the marketing media for this series, anyway.

Episode two begins exactly where episode one left off: Rhys is trying to figure out exactly how the hell a dead megalomaniac is talking to him, while Fiona, Vaughn, and Sasha are trying to figure out the location of the Gortys project. Which, because Borderlands finds humour in some very weird places, means a button-mashing event to prise out someone’s eye with a spork.

This episode largely revolves around the gang’s attempts to get to the Gortys Project, while avoiding Pandora’s native wildlife (which makes Australia, the real-life land of terrifying murderbeasts, looks like Sweetieville Candyland) and surviving villains from the first episode. Inevitably, this doesn’t go quite to plan, because if it did then this would be an exceptionally short and dull episode.

This episode of Tales from the Borderlands still feels like a bit of a ride-along, insofar as you’re watching the journeys of these characters and making a few key decisions at important moments, but I still don’t really have a problem with that. It’s still gorgeous, it’s still well-written, the playable bits are still great, and it’s still got that weird Borderlands tone that successfully varies between low-brow humour and genuine, heartfelt moments. 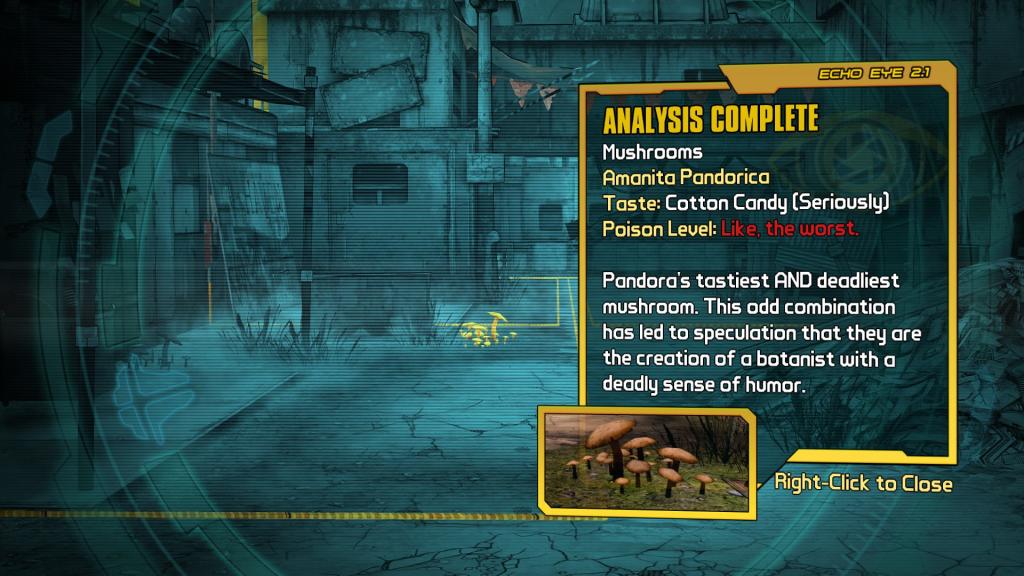 Which actually isn’t a stretch, for this series.

A few mechanics have evolved since the first episode. While Fiona doesn’t really have much to splurge her cash on (although – this being a Telltale game – it’s possible she has more options if you make different choices), you get to play around with Rhys’ Omni-Eye a fair bit. It gets an early upgrade courtesy of Handsome Jack’s presence in Rhys’ brain, and this means you can tinker with sub-systems.

This still isn’t a major gameplay feature or anything; it’s something you only use at a couple of specific moments. It’s just that those moments are genuinely entertaining and let you go a step further than before. Without wishing to spoil much, one early moment has Rhys use this to play with someone else’s gun, in order to get out of a sticky situation… and while there are only a few possibilities, it still feels like the Omni-Eye now has a lot more options, even if it is just a little thematic boost to the “hack” ability. I like it.

The other bit that gets an evolution is one I’m less certain of, and that’s the Rashomon-like framing story of Rhys and Fiona telling a mysterious captor about the game’s events in the past tense. I’m starting to get the nagging sense that Rhys and Fiona aren’t exactly being truthful with their captor, and that there are things they’re leaving out or lying about. That would make most of the playable game a bit of a shaggy dog story, and there’s certainly no proof of this, but it’s another little intriguing layer to the tale.

I still haven’t played Borderlands: The Pre-Sequel, but Athena’s cameo in this episode makes me really want to.

The rest is largely Telltale standard. You’ve got a couple of big choices, a lot of minor choices that probably have no real bearing on anything but make you feel like they do, a few quick-time event segments, and (in a relative rarity for Telltale) a few opportunities to die. Which instantly let you retry, so they don’t matter much either.

As with the first episode, this second part of Tales from the Borderlands nips along at a speedy pace. At a guess, it’s somewhere between 90-120 minutes long, so you can comfortably finish it in an evening. 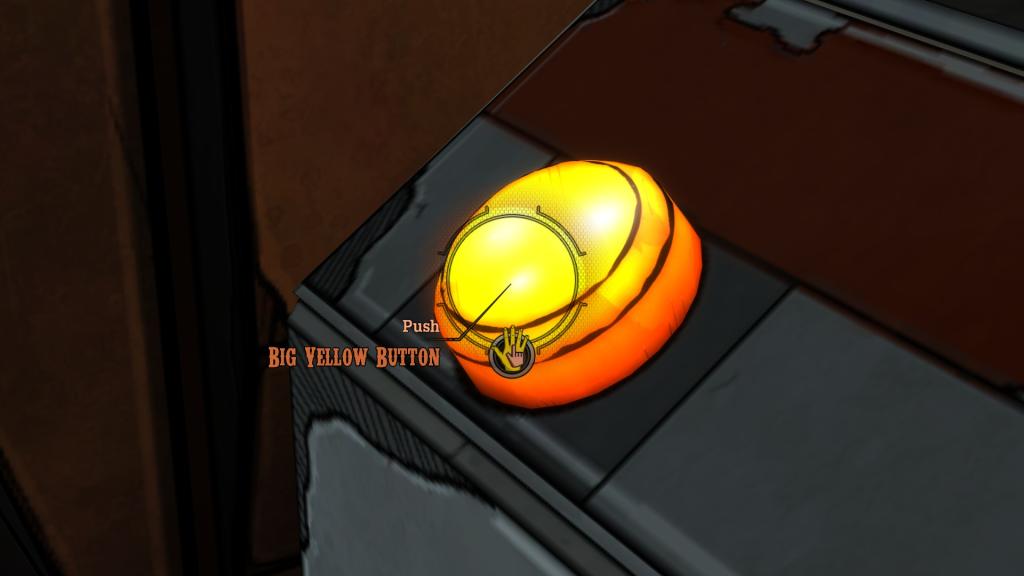 And as with Telltale’s recent output, it doesn’t really have puzzles.

But! As with the first episode, I also really like it. Weirdly, I’m never super-eager to play Tales from the Borderlands, but I thoroughly enjoy it whenever I do. It’s extraordinarily well-written, it’s set in a fascinating universe, it has some wonderful characters, and I love the aforementioned Borderlands tone that manages to combine silly fun with genuine emotion.

As a universe, it’s a perfect fit for Telltale, and the ludicrousness gives the company a chance to let their hair down between more serious fare like The Wolf Among Us and The Walking Dead, to the extent that it routinely mocks Telltale tropes. I mean, hell, the very first dialogue line in this episode is “Yes, yes, it’s been awhile. Everyone knows,” presumably referencing the absurd amount of time we’ve waited for this second episode.

Even though Handsome Jack is now around and being his usual devilish self, Loader Bot is still the best character.

The obligatory warning of We’re Only Two Episodes In So It Might Still Go Shit still applies, but Tales from the Borderlands is easily one of my favourite Telltale series so far. Telltale’s brand of interactive fiction is getting a bit predictable and staid, and this does nothing to change that, but if you can go with the flow then Tales from the Borderlands is shaping up to be a very, very good example of how well that can work.