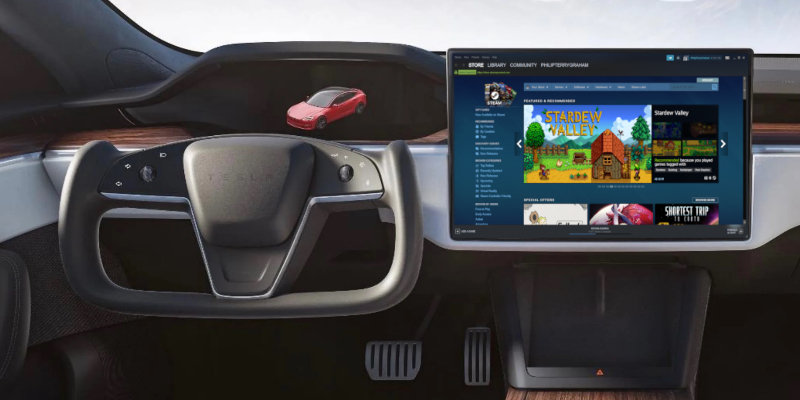 When you think about Tesla a lot of things probably come to mind. The manufacturer is known for its electric cars, cutting-edge technology, and efforts to produce clean energy. However, it is now looking to expand that reach to cover games. Tesla is doing this by introducing Steam integration into its range of cars.

Steam integration was confirmed by none other than Elon Musk himself. Unless you’ve been living under a rock for the last 20 years, you’re probably aware that Musk is the CEO of Tesla. The successful entrepreneur is also involved with SpaceX.

It doesn’t get any less subtle than that. Musk has outright confirmed that Steam integration will be making its way to Tesla cars. Even better is that a demo is planned for August, so Tesla drivers will get to try it out soon enough. It should be capable of running many games from your Library. Despite being a car and not a dedicated gaming platform, the Tesla range comes equipped with around 10 teraflops of processing power — comparable to the PlayStation 5.

Being able to play Steam games from the comfort of your car may sound awesome, but it does come with a price. A brand new Tesla Model S will set you back around $80,000 USD. There’s not much of a used market for Teslas to take advantage of, either. Even so, we might eventually see technology like this trickle down to more affordable cars. If Valve is open to the idea, then other car manufacturers may look to take advantage in the future.