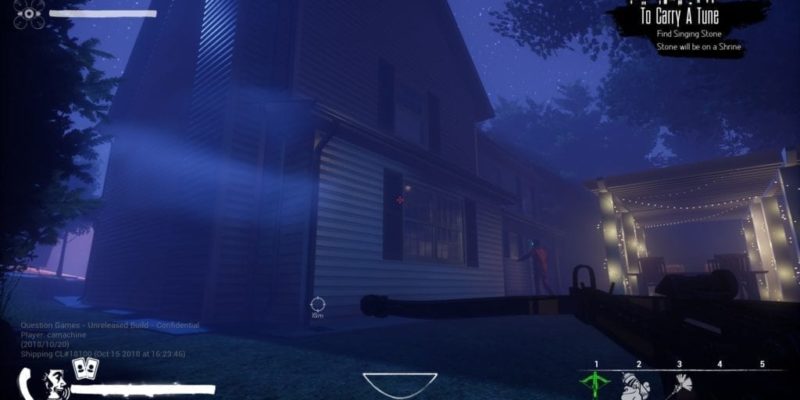 Something strange is happening in Redacre, Virginia. By day, Redacre continues like any small, American town in the early 2000s. But as the night falls, something frightening occurs. Adults wander the streets, apparently following the whims of an unseen adversary. You play as an adolescent, a child not yet 15 years old, experiencing blackouts and possessed by a god-like entity. This being has granted you a gift: a power that can be used to — possibly — eradicate the dark presence. Through your  smartphone, a mysterious group provides you with random tasks which may bring the evils of the town to light. It is all up to you, now. Welcome to The Blackout Club.

The Blackout Club follows a fairly straightforward premise. A juvenile detective in over your head, you use your smartphone and its handy LED flashlight to scour at night, recording evidence surrounding the almost cult-like phenomenon happening in town. A group known as the Blackout Club hands you your nightly orders, whether it’s to take video or recover its captured members. You can join up to three friends in online co-op, but don’t mistake it for a game like Dead By Daylight. Enemies are AI-controlled NPCs who wander the town’s streets and winding underground passages. 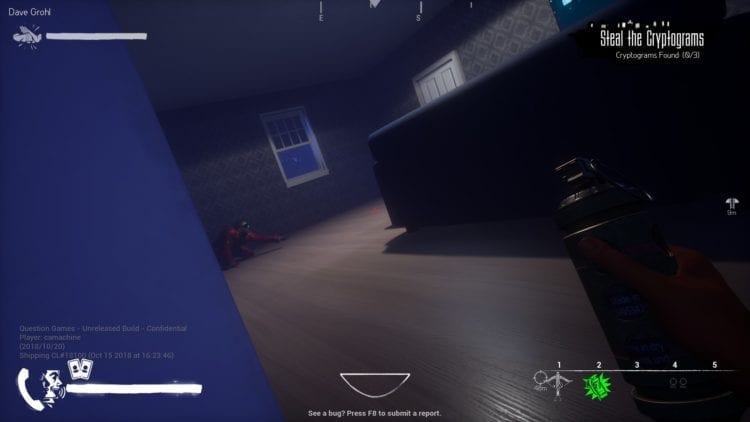 Sleepwalkers can’t see, but they can hear just fine.

Lurking In The Shadows, But Never Alone

Stealth is the main conceit of The Blackout Club. Under the cover of darkness, you stay low to the ground and avoid enemy patrols. But the darkness isn’t your ally. Blind Sleepwalkers amble through homes and streets, rambling madness. They’re easy to evade, but they can hear you just fine. You can avoid capture so long as you’re staying still or walking on soft ground like grass or carpet.

Lucids, however, are a far more difficult foe. Able to see and hear, Lucids move with authority, pointing flashlights that cut through the dark. And they’re fast. Damn, they’re fast. If you’re spotted by a Lucid, you better pray your sprint meter is full. Most enemies can be knocked out by tackling them from behind, which puts them out of the game for a short while. You can’t kill them, as your own character periodically asserts that the adults could be friends or family.

Tools Of The Trade

Luckily, you can dispatch them in other ways. Powers and items give you an edge that may help you live through the night. There are multiple abilities and tools, but you can only equip one of each before venturing into the town. It pays to choose well. You can pick a power that shuts down enemy-controlled cameras or drones, for example. Or, you can use your phone to prank call enemies, causing them to stop in their tracks, unable to hear you over the pyramid scheme offer being poured into their ears. All abilities can be upgraded with points earned by leveling up.

Weapons and tools offer you much needed edge. Some of these include a crossbow with a single tranquilizer dart capable of downing a foe, or a grappling hook used to scale walls. Crates are scattered throughout the small world. Inside you may find extra ammunition, lock picks, bandages to heal wounds, or chocolate bars to replenish your stamina. Also adding to your repertoire is an arsenal of physical moves. You can clamber over walls or into windows, which is useful in either sneaking through the neighborhood or avoiding enemies in a chase. 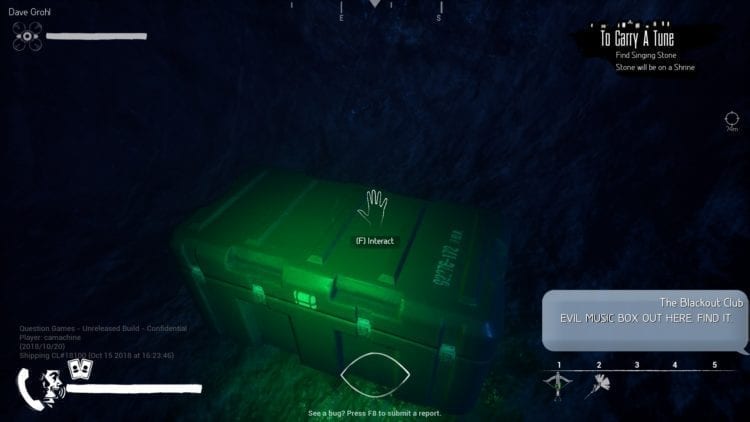 Crates scattered throughout levels offer items that can aid you.

You And Me Against The World

I played this unreleased build of The Blackout Club with our own Tyler Scott. Together, we readied ourselves against the unknown — me with a crossbow, and him with a grappling hook. It didn’t take long before we realized our stealth skills needed some brushing up. Considering my love of Splinter Cell games, our performance would have made Sam Fisher ashamed. My spirited bravado as I kicked down a locked door to face a very alerted Sleepwalker earned us no favors. More often than not, we ended up abandoning stealth at some point as we sprinted through the area with angry Lucids at our heels. But they aren’t even the worst of it.

I mentioned before that the adults of the town exhibited an almost cult-like appearance, from their imperceptible mutterings to some of them being hooded and dressed in white and red. If the town is indeed possessed by a supernatural cult, than its god is none other than The Shape. A being nearly invisible to the naked eye, The Shape emerges from red hatches or doors like a pissed off Predator (wait, is there another kind?) if your presence becomes too noticed. You can press a key to close your eyes, and only then can you view the beast. Through the hazy, blood-red lens, it appears bright orange as if wreathed in flame. Think of it like your mind being invaded by the Human Torch.

Go Back To The Shadow

The Shape, however, cannot be taken down; you can only run. And in our state of constant running, Tyler and I did discover some clever ways of at least avoiding The Blackout Club‘s big bad. Once, I crouched on a series of pipes it couldn’t climb. Tyler, on the other hand, used his grappling hook in a state of panic to climb to the top of a street lamp, Spider-Man style. Undoubtedly, in a game that favored stealth, we couldn’t have been more laughably outmatched.

In our defense, we did complete quite a few missions. Once, we did so without alerting a single enemy (check out the professional gamers, over here). That accomplishment at least offered proof you can in fact complete all objectives without The Shape ever making an appearance.

When you’re apprehended by The Shape, you become one of its minions, wandering on a set path and calling out any player who gets seen. There is some strategic value in this, we learned. You can swap your view from yourself to other players, letting allies know if there are any enemies near your shambling zombie self. Like with most enemies, you can free a friend by getting close enough to grab them. You lose when all players get captured. 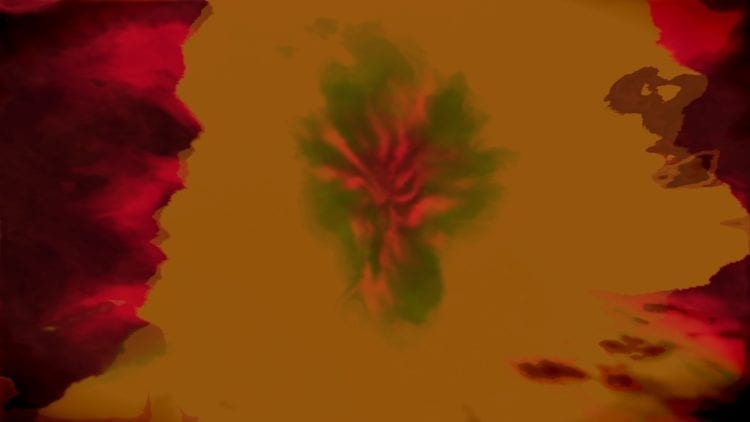 The Shape has you.

Environments and goals in The Blackout Club are randomized, keeping things feeling fresh — but only to a point. The game itself is comprised of the town above, as well as winding, misty caverns down below. You start above choosing a spawn location, then follow markers on the in-game HUD pointing you in the right direction. Missions vary somewhat, and you could find yourself looking for a missing club member, recording evidence of wrongdoing, or chasing some precious object.

The town itself didn’t seem to change much beyond enemy and camera placement, but the area below is made of interchanging rooms and hallways. However, it didn’t take long for things to feel too recognizable. “Oh, it’s this one again,” I often said as the mission began. There also only appears to be a handful of randomized rooms, where the most notable differences occurred when an area would have a camera or not. While we were having fun sneaking through the brush or playing cat-and-mouse with Sleepwalkers and The Shape, it didn’t take long for tedium to settle in. 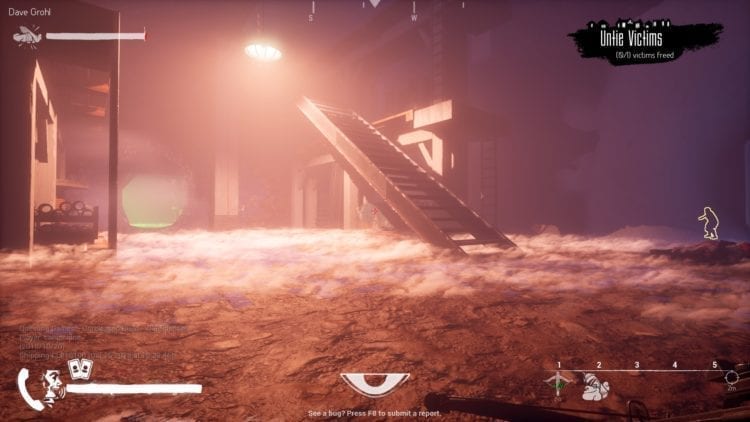 The game world consists of the town and the hidden world under the streets.

And it is this tedium that stands as the biggest hurdle for The Blackout Club. Despite its impressive pedigree, boasting a staff comprised of industry veterans from games like BioShock 2 and Dishonored, a lack of imagination can be fatal. On the other hand, we should assert again that the game is still early in development — made ever more clear by some janky animations and occasional frame drops. But both Tyler and I agreed that it’s on a promising path.

The Blackout Club has its exciting moments. We once delivered a mystical glowing MacGuffin to a drop-off point only for The Shape to burst from a door a foot away. It spooked us like cats and sent us leaping over walls or climbing the side of the nearby house. Indeed, there is plenty of enjoyment to be had. In fact, one of the complaints Tyler and I shared was that there was so little of it to experience. And I don’t view that as a point against the game; we want to see more. The Blackout Club won’t come out until next year, perhaps giving Question enough time to flesh out its intriguing stealth-em-up. Hopefully, the team knows just what to do to keep The Blackout Club from falling to the shadows.