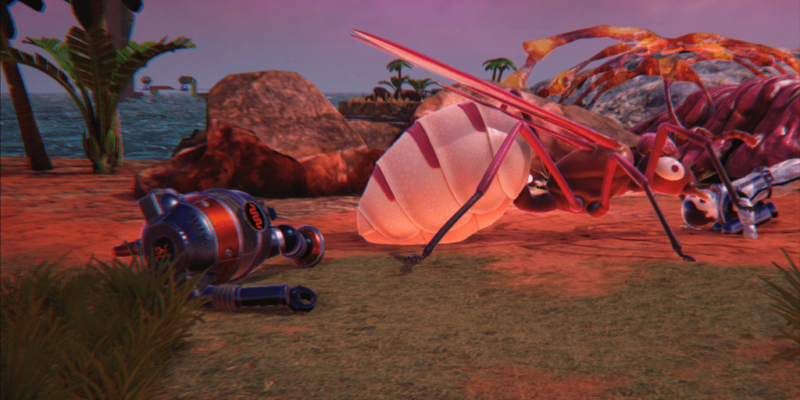 I’ve noticed something about ACE Team: they really seem to love making things structured around ascent and descent. The first Zeno Clash had a tower-based challenge mode, Abyss Odyssey was all about a multi-layered cavern descent, and now The Deadly Tower of Monsters … well, that title should be self-explanatory.

The game itself will need a little more clarification. It’s a third-person (with pulled back, semi-isometric camera) hack-and-blast through an increasingly bizarre series of b-movie monsters, as narrated by the director of a pretend film called (yes) The Deadly Tower of Monsters. The three protagonists, who can be switched between at regular intervals, are the film’s star performers: Dick Starspeed, Scarlet Nova, and the dependable Robot.

It owes at least an appreciative nod towards the similarly verbose Bastion. Except instead of your adventures being narrated by a weary space-frontiersman, you’re listening to Dan Smith; an old fashioned director who’s big on sci-fi spectacle, ways to cut production costs, and flaunting union-mandated safety rules. 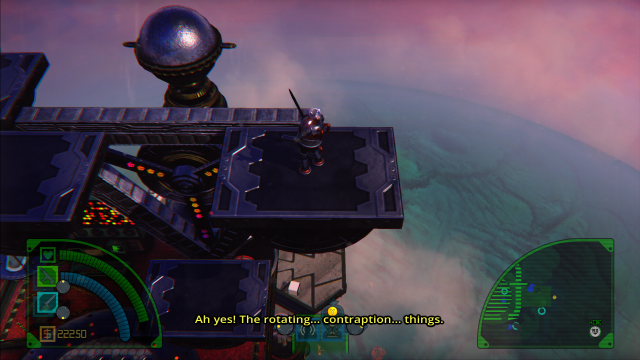 Contraption thingies! Everyone loves those.

Starspeed’s rocket crashes on the planet Gravoria, a place decorated and populated by all manner of b-movie devices. There are villages populated by sentient apes, terrifying stop-motion dinosaurs (who, in one of the game’s best visual gags, stomp around with a reduced frame-rate), gleaming glass elevator tubes, electronic panels with an impressive array of buttons, men in obvious rubber lizard costumes, ray guns, laser whips. The works, basically.

The Deadly Tower of Monsters isn’t really channeling a single era of b-movie sci-fi, it’s doing all of it at once; and then adding an extra layer of ACE Team oddness to some of the creature designs. There’s no other way to explain the (inexplicably large) dog dressed up as a vacuum cleaner beast. Anything from 1950s Flash Gordon to, well, 1980s Flash Gordon is equally fair game for a reference.

Mechanically, it feels like a contemporary take on the sort of isometric 3D arcade titles of the late 80s (things like the equally b-movie inspired Escape From The Planet of The Robot Monsters). Every character uses a shared pool of thematic melee and ranged weapons, and has a unique handful of special powers (things like a protective dome, or burst of speed, each on a cooldown timer). Melee weapons all have basic light and heavy attacks, while the guns are pretty point-and-shoot in nature. It’s also possible to dodge, or to parry attacks and laser blasts back at foes in a suitably dramatic and heroic fashion. Dodge and parry are on the same button though (and applied contextually), which isn’t ideal.

That shouldn’t matter too much, because the fighting isn’t hugely taxing and checkpoints (which can be fast-travelled to at will) are plentiful. 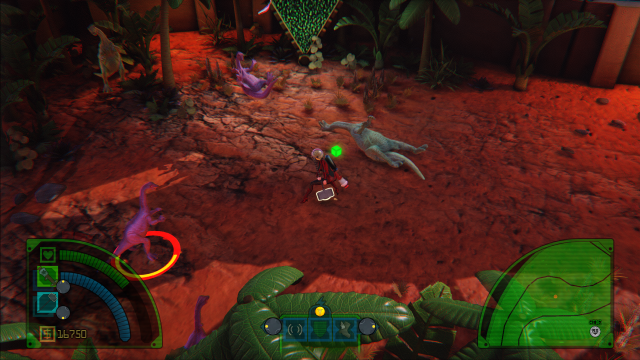 After a bit of warm-up combat at the base of the titular tower to get players used to the fairly straightforward attack options, and some basic tutorial stuff about switching characters at the “sleep chambers”, the real ascent begins. There are 60-some floors to conquer (though many of them fly past in the five hour-ish play time), monsters aplenty to slap around, and a whole lot of director’s commentary to hear.

The latter isn’t quite as reactive as Bastion’s, though it will respond to things like the player standing around for too long (“not sure why we let this scene drag on like this …”) or repeatedly falling into the jaws of the water-dwelling monster at the tower’s base. Smith’s funnier moments mostly come from the ACE Team writers realising they have to address how “videogame” this fictional movie happens to be. There’s a lot of stuff along the lines of “well, we had a deleted scene where it was explained the collected gold was being teleported elsewhere” and “the reason there are so many fight scenes …”

Not every joke hits, and Smith’s anecdotes about the blithe mistreatment of his cast and crew aren’t always quite absurd enough to elevate them above just sounding mean-spirited, but most of it provides a pretty entertaining meta-layer for the game.

A lot of the best moments come from visual jokes, like large monsters waggling obvious dummy versions of the main cast in their claws, or airborne attackers being carried along by strings. It’s actually a shame some of this isn’t carried further, because inquiring minds want to know what sort of amazing low-budget solution is powering The Emperor’s floating throne-ship. 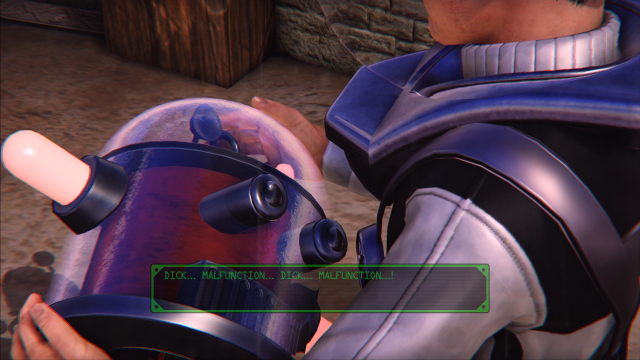 Like a real b-movie, some of the camera-work in The Deadly Tower of Monsters can be a bit obscure. The movement of your character is always camera-relative, and, since you’re ascending a large tower on some fairly narrow ledges, the camera is often panning and readjusting itself. Heading “right” to move along a path can suddenly turn into heading off the path, because the path is now pointing a different direction.

ACE Team probably knew this was a problem, because the game incorporates a very helpful “please auto-teleport me to the ledge I just fell off” button. No matter whether you’ve intentionally dived off the side looking for some of the game’s secrets, or just fallen due to confusing camera activity, it’s a useful option. There’s no saving the (mercifully very infrequent) jumping puzzle sections, though. Flighty camera work plus confusing changes in depth perception make these pretty awful. Even the inclusion of a limited-use jetpack can’t really help them.

While the keyboard and mouse controls are okay, I abandoned them in favour of a 360 gamepad pretty quickly. The camera issues seem to be exacerbated by mouse-look. Keys can be redefined from their default for a friendlier set-up, but (in this pre-release build at least), the on-screen prompts don’t change to your new controls. They will switch on-the-fly between controller and keyboard though (depending on which device you touched last).

Performance-wise, The Deadly Tower of Monsters gave me some curious dips below the cap of 60fps. The required specs are not at all demanding, so I’m unclear whether to blame the latest AMD Crimson drivers (which have caused some odd problems in one or two games), Windows 10, pre-release code, or just the older Unreal engine in general. It held 60fps the vast majority of the time, so that wasn’t a significant irritation. Just a mystery that I never resolved. 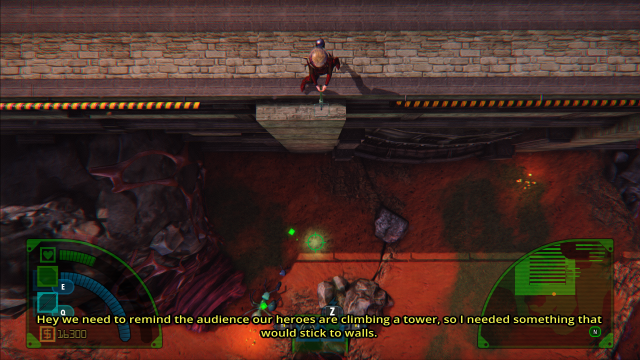 Sometimes you need to aim over the edge at encroaching hordes of radioactive ants. Or, you know, whatever.

In-keeping with the arcade feel of the enemy encounters, the game is restrained with its levelling systems. Weapons can be upgraded with three different hues of cog found throughout the tower, and the top-tier gold ones tend to require a bit of off-path exploration. The main character(s), meanwhile gain a shared level (to pop into more health, increased damage and so on) whenever something worthy of note is achieved. This can be strange, optional stuff like “use a shiv to kill a dinosaur”, but it also includes the mandatory story beats, so by the end of the game you’ll have had a few upgrades no matter what.

The Deadly Tower of Monsters has a short, focused narrative, and quick-paced, undemanding battles with b-movie villains that are everything from familiar (but lovingly recreated) to outstandingly odd. The visual tone is consistently weird and silly, and though its default ‘VHS’ film-grain filter features grotesque overuse of chromatic aberration I’m prepared to tolerate it on stylistic grounds (plus, you can switch it off if you like). Dialogue, particularly Smith’s commentary, can be a little more uneven. And the extended platforming sequences should probably have shuffled off to the deleted scenes pile.

Like the material it’s drawing from The Deadly Tower of Monsters is occasionally more intriguing in concept than it is to actually watch (or play through, in this case), but it’s a solid enough adventure romp with a keen eye for goofy sci-fi schlock.