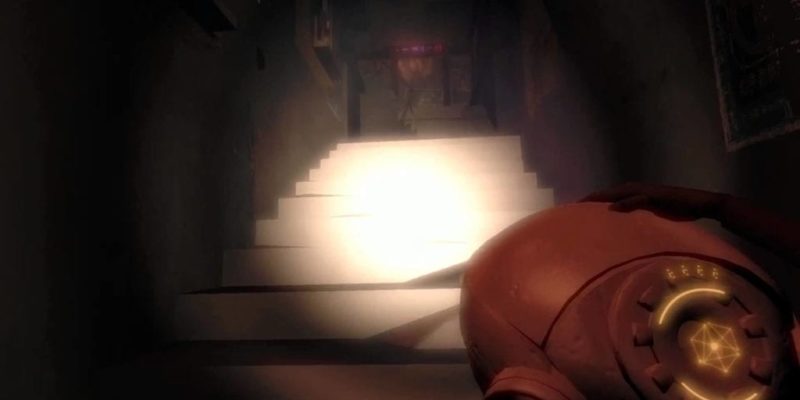 While everyone else seemed to be delving into Evolve over the weekend, some of us opted to try a different asynchronous multiplayer title: Vogelsap’s The Flock. Unlike Turtle Rock’s title, The Flock‘s alpha session is currently closed to most players; but IncGamers was granted access for some early impressions.

We’ve been watching this game for quite a few months now. Asynchronous multiplayer titles (where the sides are mismatched,) tend to have some interesting ideas behind them, and the central Flock concept of a light carrier being hunted by other players really appealed. It sounded slightly bizarre, but in a good way.

The hunters in that scenario are weird humanoid vulture-like creatures (the titular Flock,) while the hunted, which is the aforementioned light artifact-thingy Carrier, looks like a short stumpy bloke or a slightly over-weight child. 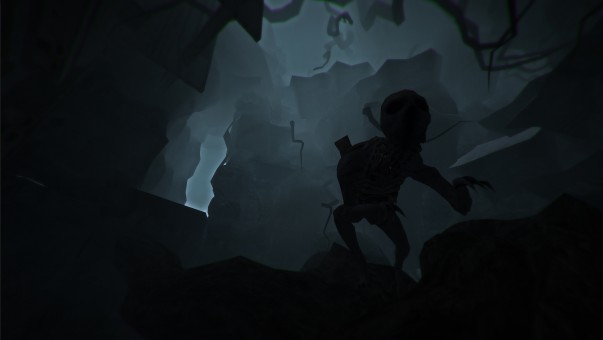 Not a tubby child. It’s actually the Carrier.

When starting the game I had no idea what the hell I was doing, beyond the basic concept I’d grasped from reading about it over the past few months. This didn’t prove to be a massive hindrance, as the concept is an easy one to pick up (beyond a couple of specific details which I’ll get into shortly.)

Clicking Quick Match on the menu drops you right into a match with up to five players. Once in-game, your first objective is to find the mystical light lantern and become the Carrier. This continues until one player has won enough points to win the game.

There are distinct differences between the Flock and the actual Carrier of the large bulbous light. The Flock are agile, able to run and leap about the level with ease, while looking and listening for the location of Carrier and the precious light source. The light Carrier on the other hand is somewhat slower and can’t leap around the map to benefit from various vantage points on the level.

So, the Flock are fast, the Carrier is slow: important facts to remember. Playing as a member of the Flock, the idea is to find the Carrier, kill him, and then become the Carrier yourself. The previous and now slain Carrier then becomes one of the Flock, effectively switching roles with the player that killed him/her.

The Carrier is highly vulnerable to general attacks, but there’s an advantage to holding the large artifact light source beyond racking up points; it can kill anyone who is playing the Flock should they be caught in the super bright beam. The Flock do however have the ability to prevent the light killing them by standing still because they can rather cunningly turn themselves to stone. This can create interesting moments when the Flock and Carrier meet.

As mentioned a little earlier, there are a few details about The Flock that aren’t really explained but are vital to know if you actually want to win a game. The Carrier needs to keep moving. At the back of the light source there are little icons that light up as the player moves. When all the icons are lit, you win the round as the Carrier. Think of moving as a way of keeping the lamp charged up.

There’s also another way to gain more bonus points. One which took some figuring out. Around the map are pads which light up with a blue beam that reaches high into the sky, enabling the Flock to easily see it from high vantage points. The Carrier can also see it with some careful scanning, but it’s not nearly as easy to spot from the ground.

Anyway, should the Carrier make it to one of these special points and shine the lamp at the blue beam with its illuminated holographic shape, the Carrier earns more points. Once that’s complete, the blue beam will then appear at another of these points on the map and the Carrier should continue to traverse the map to try earn more by moving to the next point. But that’s a gamble, as the obvious risk of heading towards such obvious focal points is that the Flock will likely be watching out for the Carrier making their way there.

Moving around the map with a massive light source makes you highly vulnerable, and it’s a bit of a catch 22. The more light you emit the easier it is for The Flock players to see you. To make matters worse for the Carrier, if your movement slows, the light actually starts to pulse and make a really great electric pulsing buzzing sound which the Flock can hear. Stop moving, and the lamp icons go red followed by the light going out, meaning the Carrier is scoring no points.

I found some poor sap trying to use this to his advantage, hiding behind a box with lamp. He didn’t last long as I swooped in from the rooftops to become the Carrier. He subsequently quit the game. Boo!

The Flock are super agile, so leaping around is simple. Vogelsap, it seems, are keen for players to use a controller, but on the keyboard and mouse it’s still a complete doddle to move around with WASD and two mouse buttons. The game’s central premise is so simple that there’s no need for loads of buttons, resulting in a title that feels easy to pick up and play.

With this being a genuine closed alpha test, certain features and game mechanics are sure to change. There will doubtless be some debate as to whether the lack of HUD information means players aren’t given enough guidance. In my view, this is actually not a problem right now. As the Flock you really don’t need any information other than “kill the Carrier,” and as the Carrier all the information needed is on the back of the artifact itself. This may change as Vogelsap look at adding other game modes. At the moment there’s only one mode of play, which is probably not enough to keep the game entertaining over the long term. I would expect to see more added in time.

It’s really hard to gauge how the final game will play out, but the concept is sound. Even with just one map (Slum) and game mode, it’s been fun to play. We’ll be keeping a close eye on this one as it progresses through development.

By Steven Wong1 hour ago
Interviews