A lot of people are going to have strong, emotional reactions The Old City: Leviathan. Some of those people might even have played it. I’ve played it. I’ve even played bits of it twice. But I’m still not sure whether its high-concept narrative is profoundly philosophical or baffling nonsense.

Maybe it’s neither. Maybe it’s both. Maybe that’s the point. 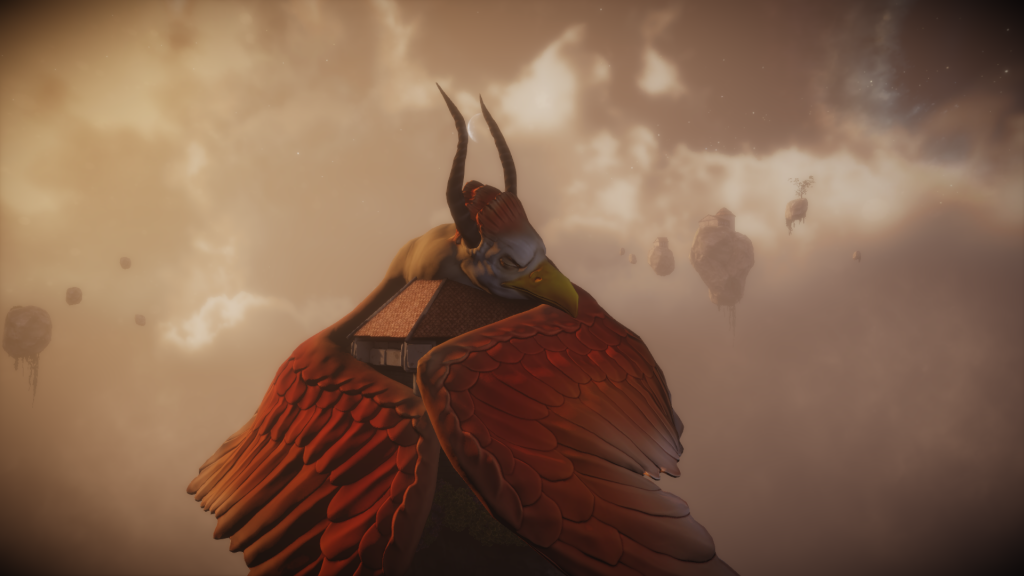 Is this real? Are you? Am I? Does it matter?

The very first piece of information given to players of The Old City: Leviathan (after your usual options menu stuff) is that they are going to inhabit a “broken mind.” Things that they see and experience, therefore, may not be real. This manifests in a literal sense – pathways that were previously walled off sometimes open up – but also makes you second guess anything and everything the narrator-protagonist says. That’s if you can even unpack his statements to begin with, entwined as they are with the game’s specific, myth-derived terminology and philosophical outlook.

It might even be a broader statement on videogames themselves. Everything we’re about to see and experience through the protagonist’s eyes is fiction. Of course it is. It’s a game.

Like Proteus and Gone Home, The Old City: Leviathan is a title stripped almost bare of traditional gaming systems. You can walk through the environments and look around. Your “use” key is restricted to opening doors and a few collectible boxes, your role in the world is to experience what’s going on and slowly attempt to piece it together. The only puzzles are internalised intellectual ones. 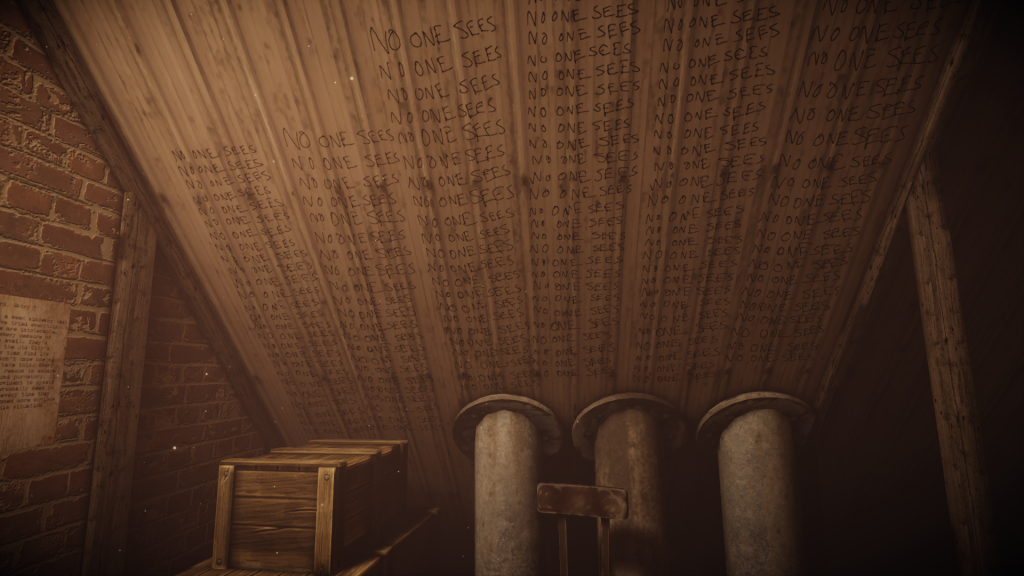 OR DO THEY? I have no idea.

As I’ve already suggested, that’s no simple task. The Old City: Leviathan doesn’t really start showing its hand until around half-way through the game’s eleven chapters. That’s around about the one and a half to two hour mark, assuming you’re exploring thoroughly (and if you’re playing this sort of game by just rushing through, you’re basically wasting your time.) If you’re stopping to read portions of the 30,000 word novella you’ll come across in your travels, then that timeline will obviously be somewhat stretched.

The fact that The Old City: Leviathan comes with a 30,000 word novella as its one and only ‘collectible’ should tell you a lot about the type game this is.

Nor is it an easy read. It’s written in the same kind of circular philosophical style as a lot of the rest of the game, and presented in a small, unpleasant white font on a black background.

It’s my least favourite stratum of The Old City: Leviathan’s multi-layed tale, reminding me of struggles through university philosophy texts on deconstruction or post-modernism by Derrida, Foucault and Lyotard (with added eye-strain.) Fascinating, vital theories when presented by an engaging lecturer, but dense, difficult and offputting when approached cold. 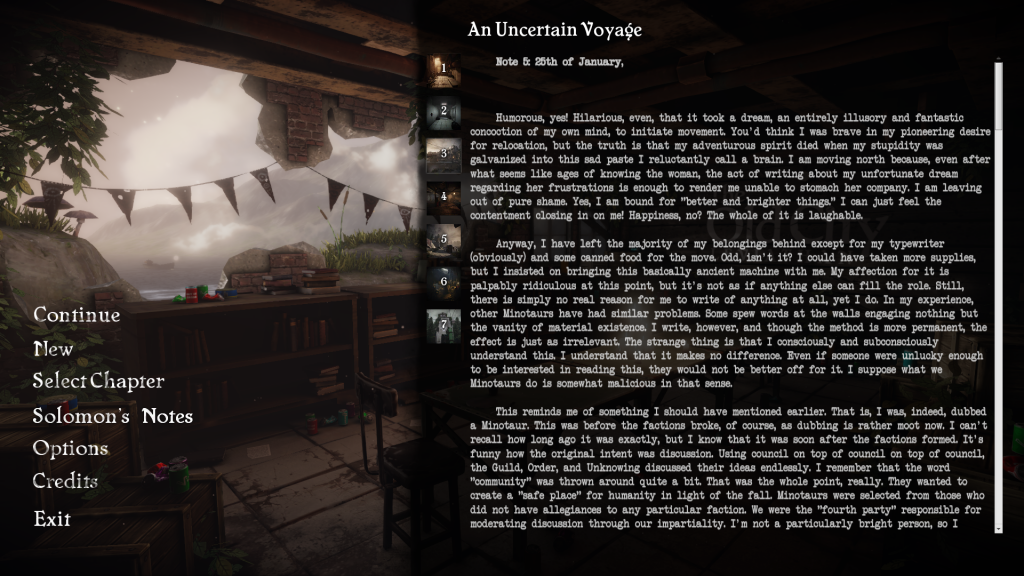 I’m not saying it’s bad, it’s just a struggle to read. In every sense.

When the game itself plays lecturer, delivering concepts through piecemeal texts, narration and visual symbolism, it fares much better. There are multiple layers of narrative here. The mystery of a factionalised, dystopian society split into three. More personal stories about Biblically named individuals assigned to mediate between the factions, dubbed ‘Minotaurs’ in The Old City: Leviathan’s strange parlance. The tale of our protagonist. Who he is, what’s happening to him, and whether those other stories are just parts of his present mental state.

Thematically, the narrative appears to rail against the idea of certainty. But it doesn’t advocate unbound relativism either. It seeks truth, even if that truth is not compatible with itself. There’s persistent symbolism throughout: the Minotaur’s labyrinth, a childhood rowboat, water, loneliness, the urge for mankind to take a leap. Where? Into dreams, perhaps.

It’s all incredibly post-modern and, as with many things post-modern, there’s an evasive slipperiness to the central themes. You can’t get a tenacious grasp on what’s happening, because the entire basis of the game appears to be a rejection of certainty and an attempted reconciliation with all that implies. It’s interesting, but ephemeral. Just when you think you might have understood, even as you’re forming that thought, the concept is already drifting away. 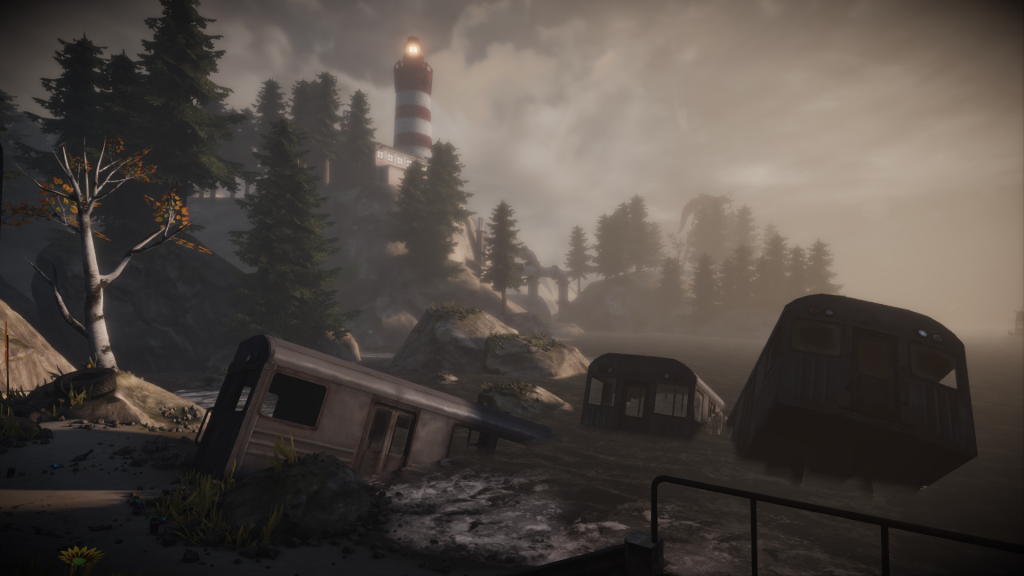 Or fragmenting and slipping to the bottom of the sea, like this train.

If that all sounds like semantic smoke and mirrors, a grand philosophical hoodwinking, or an intellectual jerk-off session, well … I can’t categorically rule that out. The Old City: Leviathan begins with the explicit warning of an unreliable narrator and only unspools further from there.

You’ll wind up with an idea of the kind of society our protagonist is from (or imagining) from exploring the finely rendered surroundings, and learn what happened with the three clashing factions dwelling in the industrial tunnels and byways of some of videogaming’s most vibrant water treatment plants.

But it’s entirely possible that what happened was only in the protagonist’s mind. It’s up to you to decide whether that matters.

You’ll also see surreal, out-of-place images, scenes of great violence and sadness, and the slowly encroaching symbolism of semi-regular trips to dream-like worlds through corridors of light. Impossible to pin down it may be, but The Old City: Leviathan can boast some sumptuous visual set-pieces. 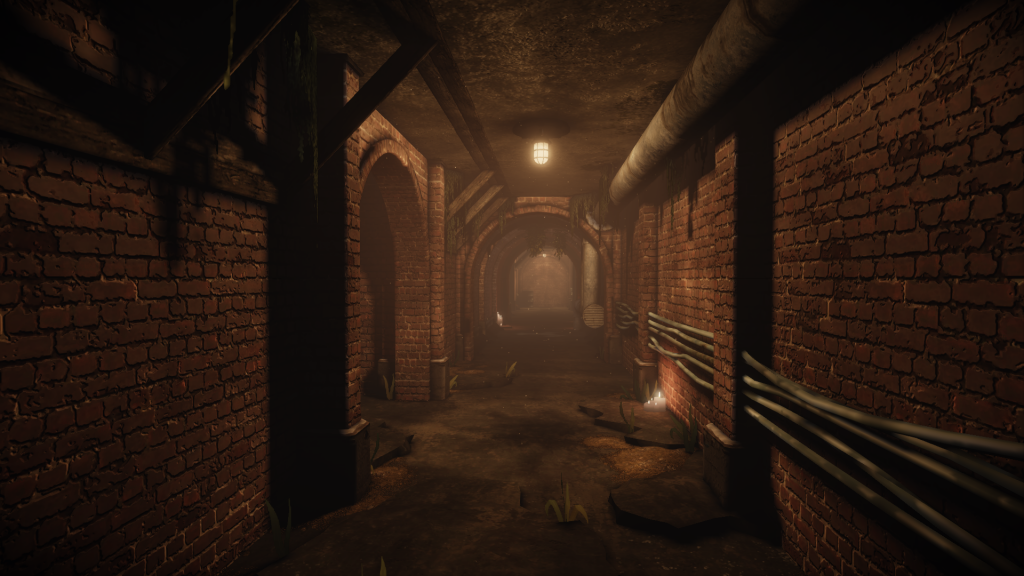 See, they’re pretty bright and inviting. For sewers, I mean.

It should be clear by now that if you’ve ever spat out the term “walking simulator” in anger, you should stay far away from The Old City: Leviathan. A far more pertinent, and difficult, question is whether I’d recommend it to the people happy to embrace this sub-genre (if you like) of game.

I think the answer is a cautious yes. It’s extremely demanding of the audience, and presupposes either a willingness to engage with difficult philosophical concepts or some prior education and reading in that realm. The visual style and score are beautiful and (at times) unsettling, but sheer surface style won’t be enough to carry players through alone. The Old City: Leviathan may be a magnificent thought experiment, or it may be intellectual artifice; but the only way you’re going to get something of lasting value from the game is by trying to unpack its circular riddles and reaching some kind of understanding.

In the game’s thematic spirit of rejecting certainty, I’m actually not quite there yet. But our review structure, in its infinite madness, demands a concrete score. So here it is.