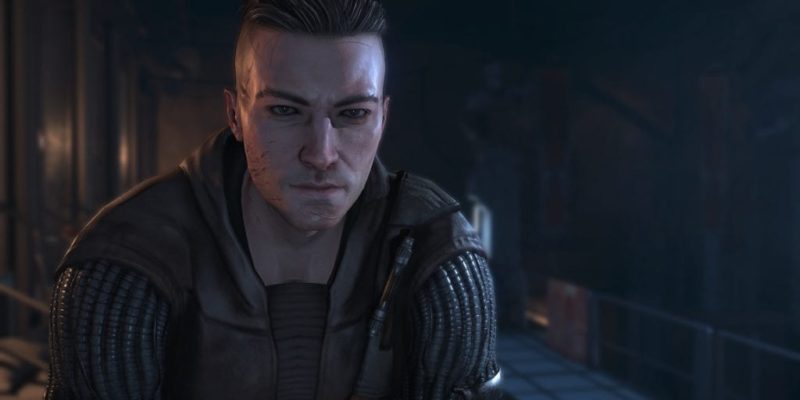 The Technomancer is a wonky game, and that little bit of crooked charm might be why I like it just a little more than I expected to. The easiest way of describing it is as a B-grade BioWare game: it’s an action-RPG with crafting and companions and romance and moral decisions, and it’s got quite a lot of systems that don’t quite come together to form a cohesive, delicious whole. It’s a Dragon Age in space gone awry, or possibly a melee Mass Effect that’s a little wobbly.

Humanity started colonizing Mars, and sometime after this, a mysterious event called THE TURMOIL cut Mars off from Earth completely and made exposure to sunlight basically fatal. Now, Mars is run by water corporations battling over the life-giving blue stuff, while trying to understand how all the ancient Earth tech actually functions. This game’s Mysterious Powerful Ancestors are, literally, humans. 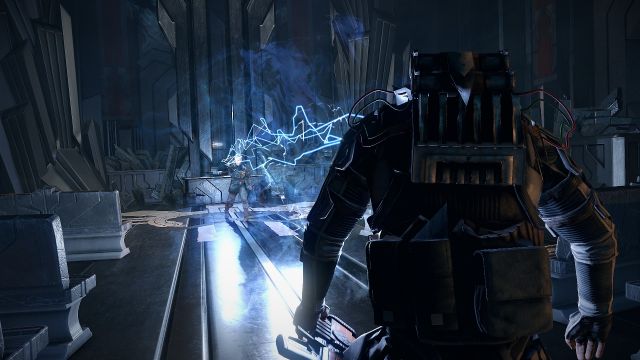 To clarify, this is not the life-giving blue stuff I was talking about.

In the middle of this is you, a Technomancer – a human with weird electrical powers – working as a soldier for one of the corporations. And then, as you’ll know if you’ve heard anything about this game before now, you wind up on the run from your corporation after their Gestapo-like secret police takes a disliking to Technomancers and starts rounding you all up. So you’re off on a Mars-spanning quest to survive, to re-establish contact with Earth, and to hopefully sort out your home corporation along the way.

A good example of its wonkiness is actually in the naming of characters. Character surnames are based on their status or job or what have you; scientists have the surname Seeker, and explorers have the surname Reacher, and so on. Anton Rogue, feared head of a criminal syndicate? Fine! But powerful electro-soldier Melvin Mancer is, uh, less fine. Whether you think this is charming or terrible is going to say a lot about how you’ll get on with The Technomancer.

It’s a game that’s pretty mediocre right the way through, without ever really dropping into the territory of being outright bad. Weirdly, though, the things that make it enjoyable differ throughout. 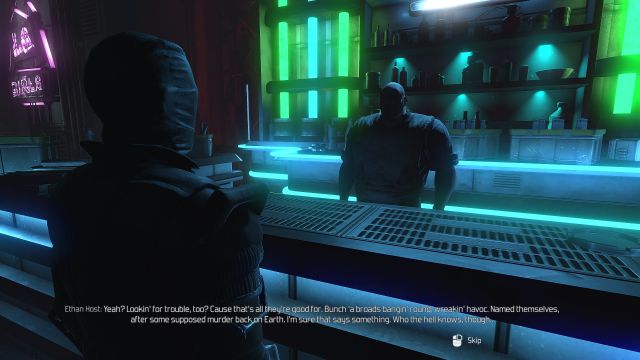 The lighting generally adds a lot to the atmosphere, although this dingy club is a bit sparsely populated. And is one of the only places on Mars with knowledge of the colours blue, green, and purple.

The early highlight is the combat. You’ve got three styles to employ – a quarterstaff, a dagger-and-gun combination, and a mace-and-shield pairing – and you can swap between them on the fly. Each have advantages and disadvantages: the mace/shield is slow but hits hard and allows you to parry blows, while the dagger is lightning fast and allows you to rain down a series of poisoned strikes and then roll away to safety. As a Technomancer, you’ve also got electrical powers that you can employ no matter which combat style you’re using; early on, these are rubbish little zaps and the ability to electrically charge your weapons, but pump skill points into that particular tree and you’ll be capable of unleashing electric megadeath on the battlefield.

Using all styles is the key to success. While you can pump all of your points into one tree, it’s far more effective to at least stick a few into each. Some enemies really require you to be able to block and parry, while others are far easier if you can use the quarterstaff’s area attacks to knock multiple foes down at once.

The counterpoint to this is that the characters, quests, story, and dialogue are rubbish in chapter one. While you get a few introductions to important players, you’ll be interacting with a lot of boring people and doing boring things. (Although you’ll probably be enjoying the music, because that’s actually pretty bloody good throughout.) 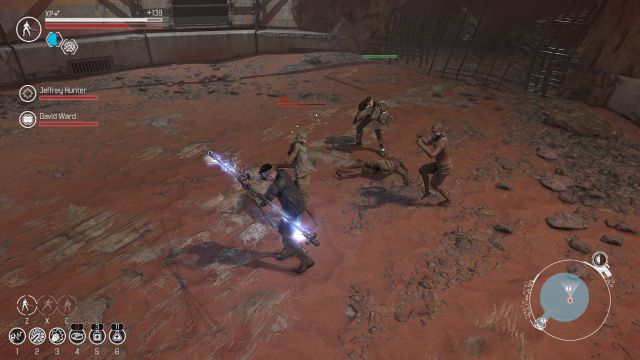 Defeated humanoid enemies aren’t actually “dead”. You can kill them off properly by draining them of Serum (the game’s currency), netting you a little extra cash but lowering your Karma accordingly. I never found this particularly necessary, though.

And then everything changes. Around chapter two, you start meeting much more interesting characters and the game’s ideas come into focus a lot more. Unfortunately, this is also the point when you’ll probably have figured out the combat system, and it’ll switch from being an entertaining little game of dodging and bashing into a tedious time-waster. Even on the higher difficulties (which can be changed on the fly) few of the enemies put up much of a fight once you figure out how the combat really functions. No matter the difficulty you can’t take many hits, so you get awfully good at dodging attacks and exploiting the systems… and that means there aren’t too many challenges left.

This is made more exasperating by the sheer amount of repetition you face. Plenty of quests send you from one end of the game world to the other, with fast travel only available between great distances (like, say, the cities). This means navigating the sprawling maps between the fast travel points, which have the exact same enemies respawning in the exact same places, which you fight in the exact same way. A limited number of enemy types doesn’t help much, either. I did learn that enemies don’t necessarily respawn between area jaunts if you don’t loot their corpses (the corpse sits there, all forlorn, hoping you’ll take its stuff) but that didn’t help all that often. Stealth is another slightly underwhelming possibility; usually, just running past enemies is the best bet, unless you need to do something like open a door which is impossible in combat. 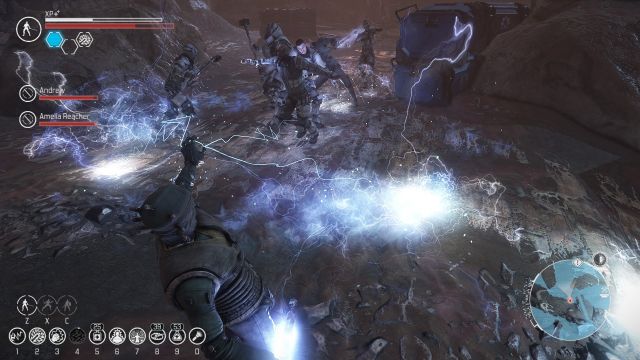 Can you tell who’s on your side in this screenshot? No, neither can I. Thankfully there’s no friendly fire and some Assassin’s Creed-style “point in the direction of the enemy you want to hit” auto-targeting.

However, this is also the time when you realise that your companion choices matter very little in terms of how well you fight, and thus you’re free to take along whoever you like and do things however you like. Considering that this is also when you start finding more interesting characters, that’s a very happy little coincidence. While those characters don’t have the most interesting arcs, they’re nonetheless good fun to have along.

Personal favourites include Scott Seeker, a scientist who is basically Walter from Fringe (complete with random tangents, rambling conversations, insane ideas, and issues with a son), and Amelia Reacher, one of the few people who can drive a rover and somehow can’t say two words without interjecting a swearword. The latter might be because I’m a fucking big fan of swearing, though. 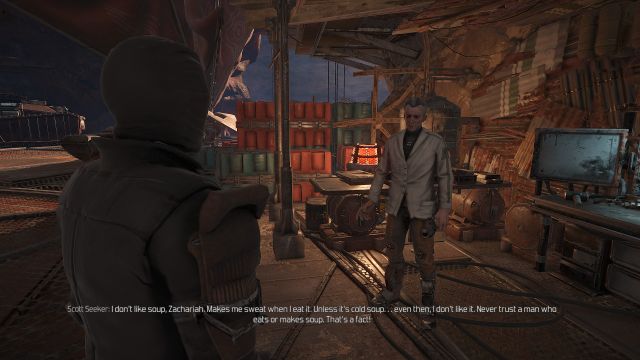 The Technomancer, complete with an unlikely guest appearance in the form of Walter from Fringe.

In a nice touch, the characters also have quite a lot of banter between them. It would’ve been extremely easy to leave things blank, but every rover trip after a major mission offers in a cutscene of your party discussing the events, and your two chosen companions will frequently interject with their thoughts – and argue with each other – during quests themselves.

As with everything else, quest design is a mixed bag. There’s an awful lot of “go to one side of these three connected maps, and then back to the other side, and then back again” which is incredibly annoying for the reasons detailed above, but there are also some really nice little asides. 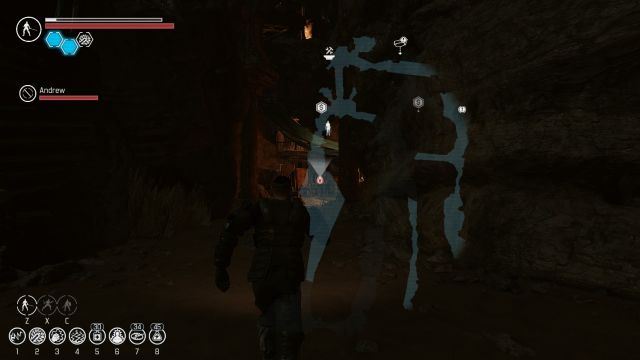 Another nice touch: holding Alt overlays a map of the area on the screen.

Chapter three’s primary quest is a good example, relying a lot on who you’ve sided with in the past and who you want to side with in the future, and it’s a really neat way of cementing the decisions and alliances you’ve already formed and making them feel worthwhile. Quite frankly, it does this better than a few BioWare games – and I’m also pretty chuffed that the eventual ending offers a summary of the decisions you’ve made and how that impacted the future.

Nonetheless, there are issues. One of your party members mysteriously vanish after certain plot events, and you’re left with a quest to investigate their disappearance – although it gives you no clues as to where to start. I spent an hour checking likely locations before resignedly moving on, despite the game having previously warned me that certain quests would become unavailable after progressing with the main quest. As it turned out, this was the right move: that quest couldn’t be resolved until the next chapter. Sigh. 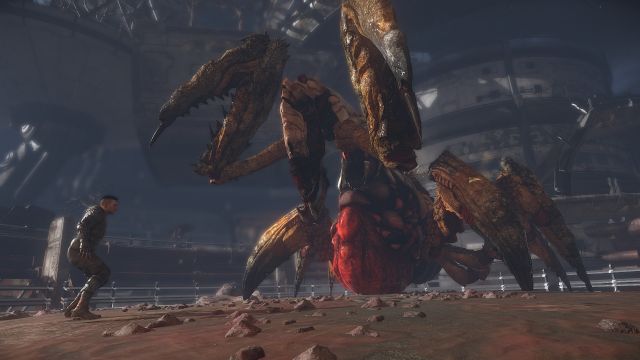 And now, bugs. (On a more serious note, I like that all of the fauna you fight are mutated Earth creatures that were brought to Mars ages ago, rather than RANDOM MARS ALIENS. This is a mantis.)

Technically speaking, The Technomancer is… fine. I hit a few bugs (one of which had the aforementioned character, rather comically, vanish while I was mid-conversation with them) but nothing too serious. In Borderless Windowed mode it crashed every few hours, and Borderless also had more framerate drops than I was expecting compared to Fullscreen, but that didn’t really impact the game any. Regular autosaves and a (very, very useful) quicksave function helped mitigate these problems, too.

The Technomancer is something I found as charming as it was irritating. With a runtime of about 20 hours it didn’t really outstay its welcome, but it’s also a game that’s difficult to outright recommend. I don’t think I’ve ever played a Spiders RPG before so I don’t know how common this is, but it’s a game with a lot of ideas that don’t quite pan out (time of day, say, and a few actual urgent quests) and everything from the voice acting to the quest design ranges from “surprisingly good” to “surprisingly annoying.” It’s a little over-ambitious, a little truncated, and it never really hits the lofty goals it aims for, but a few unexpected successes and an interesting premise make it a generally entertaining little experience nonetheless. If nothing else, I think I’m now a cult fan of this sort of B-grade RPG.

G2A to roll out ‘Developer Support System’ for its marketplace