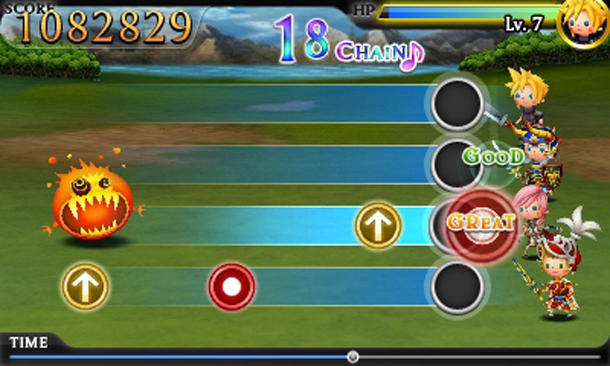 Well, this is certainly one of the more bizarre games I’ve reviewed in a while. In essence, Final Fantasy: Theatrhythmis a 3DS music game that shares elements with the rest of the genre – basically, you’ve got to tap, slide and hold your way through the game to the rhythm of the beat.

However, this being part of the Final Fantasy family, things are never so straightforward or as easy as that…

If you’ve ever played fellow touch screen music game Elite Beat Agents then much of the interactions here will feel perfectly natural, and the background visuals no less distracting and outlandish. Where Elite Beat Agents failed to capture the hearts and minds of the mass gaming public, though,Theatrhythm should fare a little better given the fact that it’s essentially a piece of nostalgia designed with the goal of rekindling those classic Final Fantasymemories.

The long and short of it is that if you’re not a Final Fantasy aficionado then you’re going to thinkTheatrhythm is somewhat trite in its almost saccharine depiction of games gone before – from Final Fantasy 1 to 13. If you are that aficionado then this is going to be right up your Midgar, a worthwhile and heartfelt look back at some of the series’ finest moments and best scenes… with some tapping and sliding thrown in for a dollop of interactivity.

Three main sections make up the game, with Series taking top billing as the game’s ‘main’ mode. Each of the 13 Final Fantasy games has its own Series, which sees you playing through a selection of tracks in a row. These include each game’s opening and ending themes, as well as a selection of the most recognisable examples from the main game – including battle music and (where applicable) world map tunes.

In Series mode alone there’s a daunting amount of content to consume, with various difficulty levels that genuinely prolong the experience due to the fact that the rhythmic inputs required are completely different each time.

Series tasks you with beating each of the 13 Final Fantasy soundtracks in three different disciplines;Battle, Event and Field.Battle mode is usually the most difficult, featuring four lines of icons that stream across the screen and must be activated in time to the music; resulting in you beating the various enemies that pop up on the left hand side.

Event mode is the grandest and most nostalgic of modes, layering the required inputs over the top of videos from the Final Fantasy in question. For everything from Final Fantasy VII onwards, these videos are montages of the cut-scenes, for the earlier games they’re made up of recorded gameplay footage. Presumably to allow you to concentrate on the imagery, Event mode is probably the easiest of the three and acts as a welcome break between more difficult sections.

Field mode is a side-scrolling walk through simplified Final Fantasy locations that primarily involves sliding the stylus up and down in line and in time with the beat. It’s the least interesting of the three.

Complimenting Series is the obligatory Challenge mode, which gives you the option of replaying the same tracks on a harder difficult, and the much more interesting Chaos Shrine.

The Chaos Shrine is made up of Dark Notes which are unlocked by building up your Rythmia (the currency awarded for completing a track – the better your performance, the more Rhythmia you earn). Dark Notes are self contained sessions consisting of multiple tracks and boasting a difficulty that is (generally) well beyond what is expected of you from the rest of the game.

In this case the difficulty is good thing because, until you get quite some way through Theatrhythm, this is not an especially challenging game as far as this genre goes. Furthermore, the Chaos Shrine is one of the best means of unlocking those rarer items.

Yep, items. This is Final Fantasy after all, and items are not all you’ll need to keep an eye on. There’s also skills and party members to get your head around. Depending on the makeup of your four person party, you’ll have different abilities and attacks to unleash. For example, choosing party members with higher XP values increases the number of misses you can make on a stage before failing while your equipped items affect the kind of magic you can unleash on enemies duringBattle stages.

Initially there’s one character for each of theFinal Fantasy games featured, each with their own base skills that can be upgraded by levelling up your XP through simply using them in events. More characters can be unlocked by putting in the hours, but as a taster, from the off you can select from FF7?sCloud, FF2?s Firion, FF13?s Lightning andFF9?s Zidane; all the main characters, in essence.

So, despite its name, Final Fantasy: Theatrhythm is an interesting experiment in mixing the increasingly popular rhythm genre with one of the most established franchises of all and, for the most part, it works rather nicely.

In all honesty, I wasn’t expecting very much from it. But it’s the kind of game that grows on you as you begin to understand the way the party system works and once that collecting bug grabs you and forces you to find all of those items and Dark Notes.

You’ll need to enjoy both Final Fantasy and follow-the-beat ‘em ups to get the most out of it, but if you’re part of the intended demographic you’ll get your money’s worth. One of the best music games for a very long time.

How good is Steam Workshop? – Mods without rockers