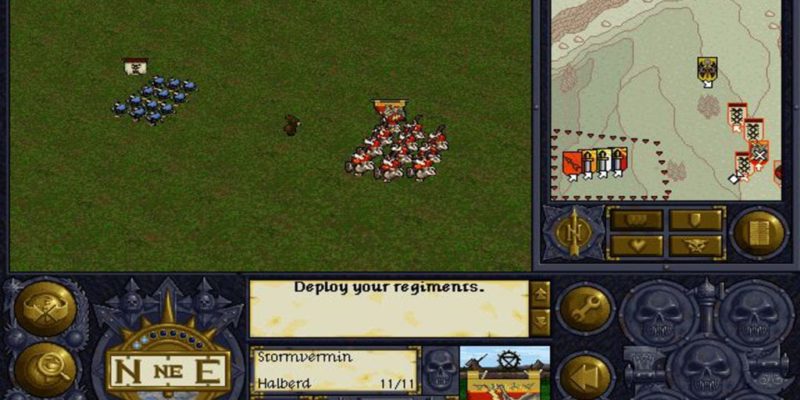 GOG have managed to get another three classic Warhammer games working on modern PCs, and they’re available today. Waaagh!

The first of the three is Warhammer: Shadow of the Horned Rat, a tactics-heavy RTS from 1995 that puts you in command of a mercenary group attempting to dismantle a thoroughly naughty Skaven plot. The big thing with this was just how bloody hard it was: losses were permanent, so screwing up in an early battle and losing half of your troops could pretty much lead to the game becoming unwinnable. Nonetheless, it was a bit good. Just don’t forget to save regularly and be ready to reload old saves if you mess up. That’ll cost you $5.99.

The second is Warhammer Epic 40,000: Final Liberation, an SSI turn-based strategy from 1997 based around the Epic ruleset. This has you command an army of Ultramarines and Imperial Guard attempting to defend the colony of Volistad from the Ork hordes, through the use of truly vast armies. And maybe even super-heavy tanks and Titans. This one’s also $5.99.

The third and final game is Warhammer 40,000: Chaos Gate, another SSI title. This was a 1998 turn-based strategy game with some light RPG elements that has you upgrade and customise your army between missions, as your Ultramarines take on the forces of Chaos in an attempt to recover an ancient artifact. It does not, however, have any multiplayer options in the GOG re-release, and it’s also a bit pricier than the rest at $9.99.

You can have a closer look at all three on GOG. Shadow of the Horned Rat is easily the most well-known of the three and was received rather well when it came out; the other two weren’t quite so well-received, but might still be worth a look.