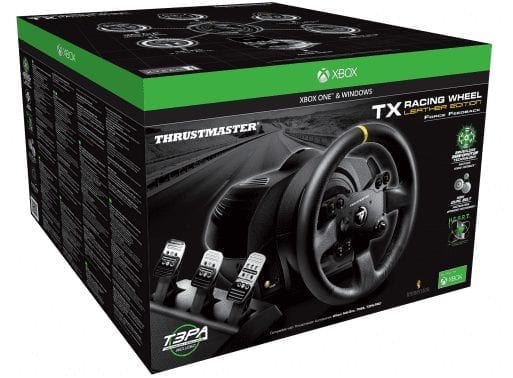 When playing a driving game, using a controller simply can’t compare to a wheel and pedals. Driving a car is a really specific thing, and peripherals can help players achieve a 1:1 correspondence between in-game action and reality that other genres simply can’t match. I’ve been able to spend a lot of time with one such peripheral lately: Thrustmaster’s TX Racing Wheel Leather Edition wheel and pedals. So, do they meet expectations for a high-end experience while gaming?

Since first things are first and this is a large peripheral set, setting the TX Racing Wheel Leather Edition up needs to be discussed. The wheel is large and requires a desk of some sort to either be clamped to or mounted on. While something sturdy is definitely suggested, I found that an inexpensive folding desk from Walmart was adequate for this purpose. Next, I had to set the wheel in the wheel base. The base is compatible with any other Thrustmaster wheels as well. Clamping the wheel to the desk wasn’t a difficult or time-consuming task either.

Then there’s the pedal set, which merely needed to be connected to the back of the wheel. The pedal set might slide around a fair amount on a wood floor or tile. However, the rug I had it placed on made sure that there would be no sliding. Since this is a force feedback wheel, it obviously needed a power source, so I plugged it into a nearby outlet. After that, I just needed to plug the wheel and pedals into my computer via USB. The TX Leather Edition isn’t exactly plug-and-play, though.  Firmware had to be downloaded off of the Thrustmaster site. Even so, all-in-all, it was a fairly easy set-up that didn’t take long at all. 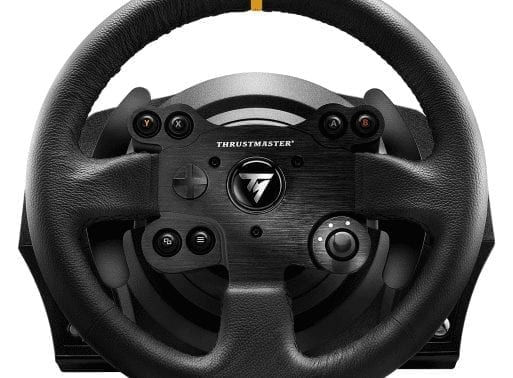 The leather grip on the wheel makes it feels extremely authentic.

The Buttons Available Give A Whole Suite Of Options

The quality of the TX Racing Wheel Leather Edition items is very satisfactory. As the name implies, the wheel itself has a leather cover that makes it feel an awful lot like the real thing. The base the wheel sits in is large and very sturdy. Unlike many other pedals, which come with just gas and brake, these also have a clutch. This results in a wider-than-average pedal set. The pedals all feel as they should as well. The gas pedal is lighter and gives under a smaller amount of force, as is to be expected, and the brake pedal also behaves similarly to the real thing. The clutch pedal appears to be identical to the gas pedal.

The wheel has buttons on it akin to those on Xbox controllers. There’s also a D-Pad for menu selection, plus levers on the left and right side that can act like triggers. You can use buttons on the wheel base if you find yourself running out of ones on the wheel. There’s also a little knob that you can turn left and right that’s great for headlights and windshield wipers, if the game has those. The buttons all feel really solid and responsive as well. Overall, the construction is excellent and exactly the quality I’d want from a product such as this.

One thing the TX Racing Wheel Leather Edition absolutely excels at is its force feedback. The FFB here is truly out of this world. Whether I was feeling the idling of my engine through light vibration on the wheel or having the wheel readjust itself after spinning out, the FFB never failed to impress. It’s powerful and really something to experience. 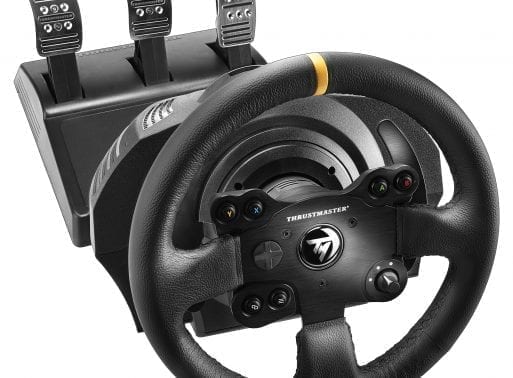 The pedals have a nice-sized base that’s comfortable to rest your foot on.

When it came to actually using the wheel with games, however, things got trickier. I tested the TX Racing Wheel Leather Edition with a host of games. These included extremely arcadey older ones, such as Crazy Taxi 3 and Burnout Paradise, and more recent fares in series such as Need for Speed, The Crew, and Dirt. Surprisingly, Crazy Taxi 3 was the only game to immediately let me select the wheel, which is strange considering it released in 2002. Its configuration let me immediately choose it and then calibrate the wheel and pedals. Other games had me going through menus, and I had to individually map the controls. Thankfully, they all detected the wheel’s force feedback.

You’ll also need to calibrate the wheel’s sensitivity with each individual game. I found the default setting for most to be either way too sensitive or not nearly sensitive enough. It was annoying at first, but it only took a few minutes per game to find where I wanted it. The force feedback also varied wildly from game to game. Some games had so little that I had to keep track of exactly how much the wheel had turned or risk losing complete control. The Crew, in particular, made it feel like the game was playing itself and controlling my hands instead of the other way around.

There aren’t really any negatives to speak of with the TX Racing Wheel Leather Edition. If anything, the force feedback is somewhat loud and someone could possibly hurt themselves if they weren’t paying attention as to where their hands were when the wheel centers itself. The wheel calibrating itself when turning on my computer was also really surprising. It left me feeling like the peripheral had been possessed or something due to how loud and forcefully it righted itself. I also found that the wheel base started to make a fair amount of noise when I left it plugged in overnight. Therefore, it’s advisable to unplug the power cable when the set isn’t in use. 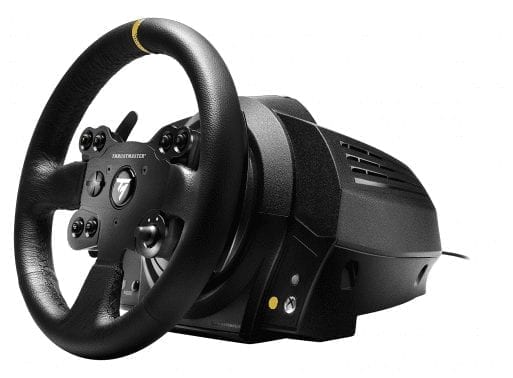 Rest assured, the wheel base isn’t going anywhere once clamped down.

This Is A Really Great Set For Any Driving Fan

The Thrustmaster TX Racing Wheel Leather Edition is definitely a great choice for anyone looking for great driving game peripherals. Everything looks and feels great, and I can’t imagine playing a driving game without it now that I’ve grown accustomed to what it has to offer. Just try not to get spooked by the wheel randomly coming to life when you least expect it.