Top 10 Games for the Playstation 3

As the PS3 nerd-in-residence, I’ve been asked to compile a list of my favourite games for the console. This list doesn’t include any first-person shooters, so if you like those, you’re out of luck. Nor does it have Mass Effect, Assassin’s Creed or Bioshock. I’ve even taken a pretty huge risk and included a trio of HD remakes, something I am almost certain is illegal on a gaming website. Nevertheless, in the words of Adam Sandler, I have the microphone so you will listen to EVERY **** WORD I HAVE TO SAY. 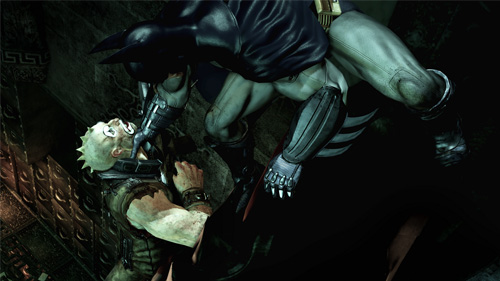 Let the derision begin. Yes, I know the sequel is better, no, the sequel isn’t on the list, and, yes, I had a Batman duvet cover when I was younger. Batman rules. I had a Batman cake at my fifth birthday party. When I was a kid the only thing I wanted to be when I grew up was Batman, and this is the first game that made that possible without making Batman a wimpy little nancy-boy. He had a deep voice, his suit didn’t have nipples (if it did, I mentally blocked them out), and he had stubble for God’s sake. He was, for the first time ever, BatMAN. And it ruled.

The combat system was solid, it had stealth and upgrades and slow-motion and managed to cram in some of the greatest DC characters of all time. I don’t have to justify myself to anyone so let’s move on.

Best moment: That perfect second when you dive down on the very last henchman in any stealth room and no longer have to sneak around. You’re Batman, for crying out loud. Show some dignity. 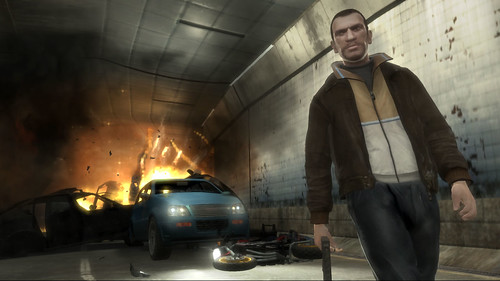 This game had a lot to live up to. Coming from the finest gaming pedigree on the previous generations, the GTA series was already the most critically acclaimed of all time. As the first instalment on the next-gen consoles, GTA IV had some pretty enormous shoes to fill, and for the most part it delivered. The story is pretty darn impressive, though it has to be said not as long or mind-blowing as that of GTA: San Andreas. In saying that, it’s very bit as aggressive, violent and bloody as you would want from this series.

Best moment: Getting all the pigeons. Just kidding. 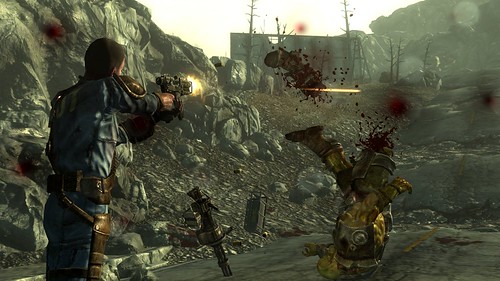 Coming from one of the best studios in the world, this won’t be the only Bethesda title on the list (surprise, surprise). I know I said I wouldn’t include a first-person shooter but come on, this is hardly the same thing. Fallout 3 managed to be the best of both worlds, combining first-person shooting action with RPG levelling and tactics. Like other Bethesda games, Fallout 3 also relies on choice and exploration – if you’re willing to put some serious hours into a game, this is one to try.

Best moment: It’s hard to pick one; the best thing about Fallout is that you don’t actually feel like the most important guy in the world for the most part. But if you’ve played the game, you won’t forget the Tranquility Lane side-quest. 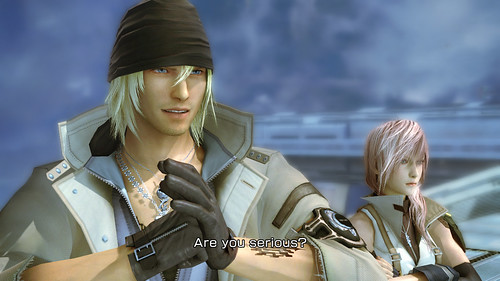 As mentioned above, I’m an RPG fan. It feels wrong to make any top ten list without including a Final Fantasy title; let’s be honest, most best game lists end with “and then Final Fantasy VII came and RUINED IT FOR EVERYBODY ELSE”. Ever since the release of XIII-2, everyone seems to be hating on the original. In fact, I sort of loved it, and I got addicted. Is it as good as VII, or X? Perhaps not, but it’s still pretty breath-taking visually, has some epic fight scenes and as ever tells a pretty good story. And until they release FFX in HD (not like I’m holding my breath, or anything. Take your time Square, whatever, not even a big deal) this is going to have to be my Final Fantasy entry for the PS3.

Best moment: When Sazh shoots himself! Or does he? No. Still. Sweet fake-out. 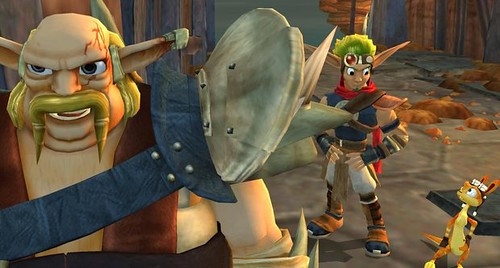 Yep, I went there. Nobody else will ever have this on their top ten list, but let me explain. To me, the Jak and Daxter series is like Star Wars, Wham! and David Hasselhoff; they’ve aged badly, but you love them anyway. I still remember waking up on Christmas Day, 2004 and spending a truly embarrassing number of hours playing Jak 3. I was young, give me a break. Well. I was like 14. Relatively young. A next-generation re-release was a trip down Memory Lane, turning left into Nostalgia Avenue and hanging a right into Past Parade. It was cool, is what I’m getting at.

As well as that, Jak and Daxter games are just great. The characters in that trilogy are some of the best ever created – Krew, Damos, Sig and Torn are genuinely memorable, interesting and believable characters, something that a lot of current gen games have done away with. And let’s not forget snappy dialogue, a plot full of twists and turns, and missions that are varied and entertaining. It’s a champ.

Best moment: The ultimate ‘I am your father’ call when Jak founds out he is Damas’ time-travelling, long-lost son from the past. Confusing but awesome. 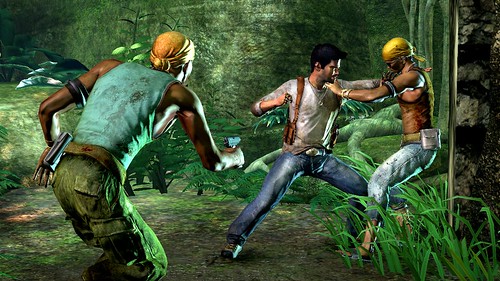 It’s probably a sin to have two Naughty Dog games in a row, but hey, why don’t you shut up? The first instalment in the Uncharted franchise fulfilled what every single Indiana Jones game had promised: a kickass action-adventure story that even a digitalised Harrison Ford couldn’t pull off. Naughty Dog didn’t try to revive Indy, instead creating their own hero, Nate Drake. Ever since this game was released fans have been hooked by good writing, gameplay and some of the most stunning scenery available on the PS3. And until Naughty Dog makes an actual Indiana Jones game, it’s likely to stay that way.

Best moment: Drake has to search for clues (naturally) in a submarine (naturally) teetering on the edge of a waterfall (naturally). The ridiculous size of the U-boat, and the visual-depth of the surrounding jungle, blew my mind. Naturally. 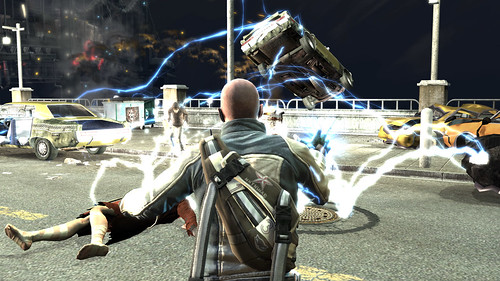 I thought Sony had gone mental when they released this game as one of their “whoops, sorry we suck at the internet” freebies. Ever since it was released Infamous has been one of the games I’ve had the most time for. A film noir-esque storyline with a perfectly-tortured lead character, right from the first mission it had me hooked. Add to that the ability to shoot lightning out of your hands and leap from tall building to tall building and we have a winner, ladies and gentlemen.

Deciding whether you will be the saviour of the people or their worst nightmare is also a compelling aspect, and the comic-book style interludes make playing through the game twice worthwhile.

Best moment: Save the love of your life and let a group of people die, or vice versa? Genuinely heart-rending. I’m tearing up. 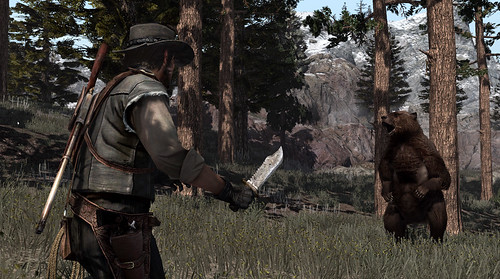 Grand Theft Equestrian. Who isn’t a sucker for a Western? The only way anyone could improve GTA: San Andreas was to set it in the old west. Or in space, for that matter, but that would be asking altogether too much. Red Dead signifies the first time I’ve started a game, looked at the hero and said, “Christ Almighty, look at his face. He looks like he’s been gargling battery acid. And talks like it too.” John Marston, the best anti-hero to ever grace a console, gives you the freedom to do whatever the hell you want. Want to rob a bank? Go mental. Feel like raiding a bandit fortress and stealing everything in sight? Go for it. Do you want to hogtie a prostitute, throw her on the train tracks and then use her flattened corpse as target practice? Don’t look at me like that, we all did it.

Aside from the freedom to be as dastardly as you like, Rockstar are champion storytellers, and Red Dead is no exception. They spend the whole game making you love your protagonist even with all his faults, and then, well. Let’s not spoil it. But the ending certainly gives you a shock.

Best moment: The end, where you go into Dead Eye mode, and you’re like whoa you guys are gonna die and then BOOM and just wow. Wow. No spoilers. 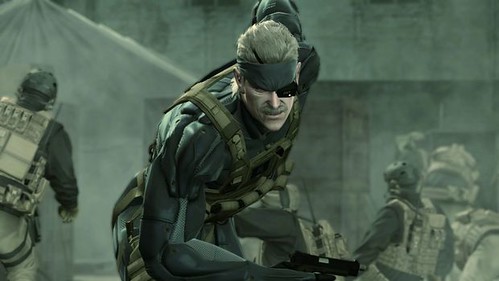 Guns of the Patriots is ridiculously intense. The Metal Gear series has always made stealth combat, usually the most interminable game genre, and made it better than any shoot ‘em up game on the market. This instalment goes one better, with a plot so convoluted comparing it to a plate of spaghetti is offensive to pasta everywhere, and a main character so old and badass he makes Clint Eastwood look like a hobo. Only Snake could be calm enough to casually light up a cigarette in the middle of a full-on fire-fight.

It’s easy to criticise the game’s storyline, but then you remember you can blend into walls and shoot people in the face with tranquiliser darts. There are guys with samurai swords, gigantic leaping robots that moo like cows, and one legendary hero who’s sneakier than everyone else in the entire history of gaming ever.

Best moment: In a game like this it’s hard to pick one. But the first time you realise how full-on this game is going to be is the first boss battle against the Laughing Octopus. A floating, eight-legged woman who cackles with laughter while whispering your name is easily the creepiest twenty minutes of anybody’s day. If that doesn’t float your boat, the cut-scene where Raiden mows down legions of enemies with a katana is also pretty incredible. Or where Snake’s clone-brother beats the living hell out of him for no apparent reason whatsoever. Just play the game. 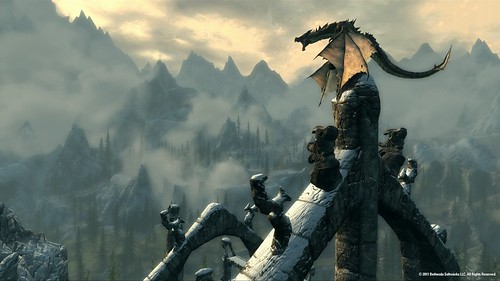 Yeah, wow, this was a really hard one to see coming, I know, I know. I’m not proud of it; I’m sure you were expecting a real nerd to be more discerning. Fact is, I can’t fault Skyrim. Yeah it lagged the hell out of my PS3, and yes, it sucked away the precious hours of my life with what is a relatively anti-climactic ending. But there’s something oh-so-satisfying about creating a 6-foot-tall dark elf that looks extremely similar to the Undertaker and using him to cut off vampire’s heads with a magic sword he created himself from the collected souls of his dead enemies.

For a role-playing nerd, Skyrim had it all. Hack and slash elements took me way back to games like Champions of Norrath and Diablo. There was a strong possibility of playing the game non-combat style, though let’s be honest, it’s way more awesome to cave people’s heads in with a mace. You could be a magician, a warrior, or a weird lizard creature. And you kill dragons. That’s pretty much all I’ve ever wanted to do since I was like, four years old. Now, if only they could somehow put Batman into Skyrim…

Best moment: Finally realising that you’re strong enough to kill a mammoth and the first time you manage to beat the **** out of a daedric lord both come to mind, but the best moment is the most obvious one. You’ve just started the game, you’re like level three, and you kill your first dragon. Something that would be the apex of most games is just the beginning. Talk about upping the ante.