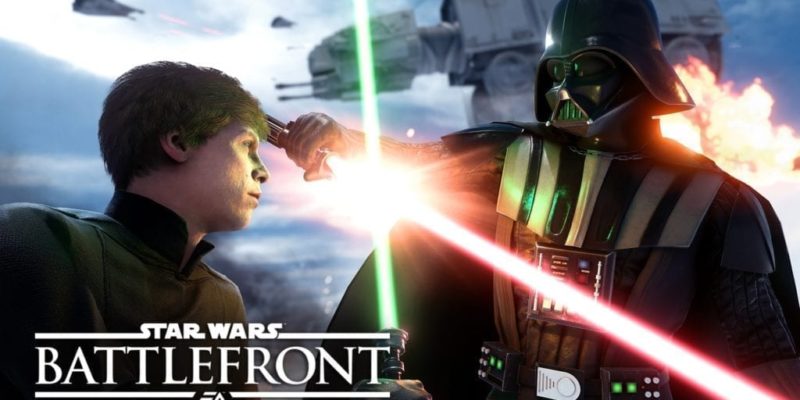 With E3 2015 now behind us, we count down the games we’re most excited for from the show floor and E3 press briefings. There were a lot of games this year, but these took the cake for the ones that most impressed us. So without further ado:

It should be no surprise that Star Wars: Battlefront makes our list, given the enormous amount of hype surrounding DICE’s new shooter.

Featuring the epic locales and characters of the Star Wars universe, and given DICE’s track record of excellent war games, the game has attracted lots of attention, and deservedly so. From everything we’ve seen so far, it looks to live up to those expectations.  We even got our hands on some multiplayer co-op action at E3, and you can check out our thoughts here.

The game looks beautiful, and the shooting experience is fun, if a little simple at times. Vehicular combat (like flying a snow speeder) looks insanely fun, and we hope to plenty of it in the final release.

And while we expect Battlefront will be best played on PC (mouse and keyboard, naturally), it’s also being released on the PlayStation 4 and Xbox One. Battlefront comes in at number five, representing our enormous expectations of the title and our concerns that combat may be a little too shallow when compared with its Battlefield predecessors.

Total War: Warhammer looks ready to revitalize the excellent Total War series by throwing four unique races, each with their own play styles, objectives, and units, into massive battles and sweeping campaigns. We were shown a demo of the current pre-alpha state of the game, and it looks fantastic.  With heroes that level up and have skill trees, flying units, massive monsters, and powerful spells, combat looks more exciting than ever.

When you see a Wyvern pick up a knight with its claws and chuck it across the battlefield while a giant eats men-at-arms below, there’s nothing to do but shake with giddy laughter. You can even control a goblin doom diver as he flies head-first into an enemy unit, like a miniature flight sim.

We know that each of the four factions (The Empire, Greenskins, Vampire Counts and Dwarves) will each play differently both in combat and on the campaign stage, with fundamentally different objectives. While The Empire will play more traditionally, the Greenskins will be trying to start a WAAAGH!, a sort of Orcish holy-war. While it’s still early, Total War: Warhammer looks very promising, earning the fourth spot on our list.

Deus Ex: Mankind Divided is another game coming out also on Xbox One and PS4, but will likely play best on the PC. We got a closer look at the E3 demo, most of which you can see above, and provided our thoughts here.

Needless to say, the game looks great, with upgraded graphics, more abilities, and more game play options. Specifically, we’re looking forward to the increased social interaction options and the way that NPCs will react to your actions in-game. Boss fights, unlike in Human Revolution, don’t have to be defeated through sheer force; social, stealth and hacking options will be available in most cases.

The Deus Ex story continues in Mankind Divided, taking place two years after the events of Human Revolution. Prejudice against augmented humans has reached a fever pitch, and most are segregated into poor ghettos.This dark future is rendered with precision and clarity, showing both sides of this division without condescension. Exploring this world looks as exciting as the one of the original Deus Ex.

We’re also excited to see more of protagonist Adam Jensen’s new abilities, like his exploding nano-blade, or his ability to simultaneously shock and take-down four enemies simultaneously. For us long-time fans of the Deus Ex series, Mankind Divided is looking stellar.

We don’t yet know everything about No Man’s Sky, or even its release date. What we do know is that it looks amazing. Unfortunately, there wasn’t a lot being shown off at E3 2015–but it doesn’t matter. No Man’s Sky will undoubtedly be one of the most anticipated releases in the next year (and we do expect in within a year).

The game encompasses a colossal, procedurally generated universe for player’s explore and seamless space to ground transitions, we expect gamers to spend a long time in the millions of available worlds.

Game play will press you to research flora and fauna, mine for resources, and engage in space battles, all while avoid getting killed by the ancient sentinels that guard many of the planets from incursion. You can name many planets and species, and join guilds that span the stars. They can also upgrade their ships and equipment, allowing them to push father into the immeasurable cosmos.

With all the hype, there’s a lot to live up to. But I expect I’ll see you in the ‘verse whenever Hello Games gets around to letting it into the wild.

Release Date: TBA (though likely late this year or early 2016)

Let’s be honest, after the brilliance of The Witcher 3: Wild Hunt, there’s really only one other game in the running for PC “Game of the Year.” And, considering its track record, Bethesda Game Studios has the ability to obtain that accreditation. With Oblivion, Fallout 3, and Skyrim all garnering multiple Game-of-the-Year awards, it stands to reason we can expect excellence from Fallout 4, too.

Nothing we’ve seen so far suggests that it won’t be excellent. The gameplay trailer being shown by Bethesda looked phenomenal, with strong visuals, an exciting new world in and around the ruins of Boston, and new game-play options.

Of the latter, Bethesda showed off the new ability to build your own communities, complete with the ability to place walls, staircases and furniture, and unite those communities by trade-routes. As new members join these communities, you have to defend from raiders with turrets and other defences, power them with electrical sources, and ensure that water and food are available.

The protagonist will also be voiced this time around, even though you can play multiple character options, allowing for a more complete narrative experience. Like previous games, followers can be obtained, and the dialogue options will be greatly expanded and reactive to player choice.

Number one on our list, Fallout 4 stands to impress, and we eagerly await wandering in the wasteland later this year.