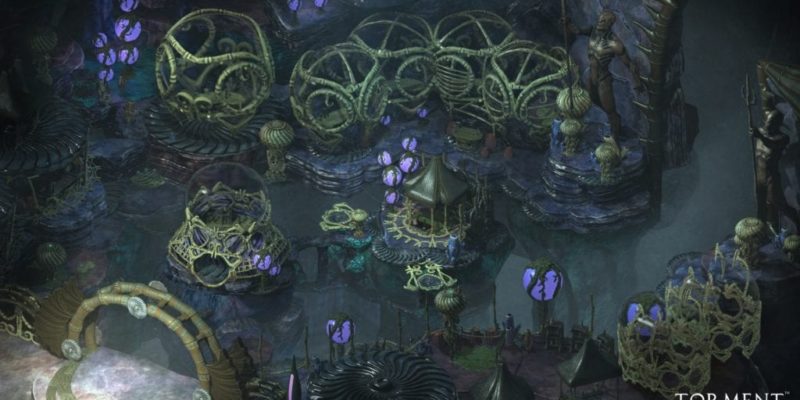 In a new interview with PC Invasion, Torment: Tides of Numenera’s project lead Kevin Saunders expresses the desire for their spiritual successor to be “even more literary” than Planescape.

Asked how the design approach for Torment: Tides of Numenera differs in comparison to the much-praised original Saunders says that “In terms of the gameplay, we’ve probably gone for even more of a literary approach than Planescape.”

This doesn’t necessarily just mean ‘more words’ (after all, Planescape had an awful lot of words,) but the manner in which philosophical themes are presented.

In the interview, Numenera creative lead Colin McComb describes the design intentions as follows: “We want our players to be active participants in this game, and thinking about it, and figuring out what it is that they’re pulling away from the game, and building in little verbal puzzles as well.”

“The main difference is that Planescape is built more around belief, and wisdom, and the exploration for answers regarding the soul; whereas Numenera is more around exploring the world around us as it is,” McComb adds.

The experience of this Torment is said to be “less of the everything-is-rusty-and-falling-apart kind of thing,” and more colourful, yet also evocative of a wealth of great technological history. “We don’t want to solely do the dark, grim, crushing experience that a lot of Planescape was, but at the same time we also want to convey the sense of incredible age,” says McComb.

You can read (or indeed listen to) the full Torment: Tides of Numenera interview on PC Invasion right here.

LEGO Worlds Gets a Surprise Release on Steam Early Access