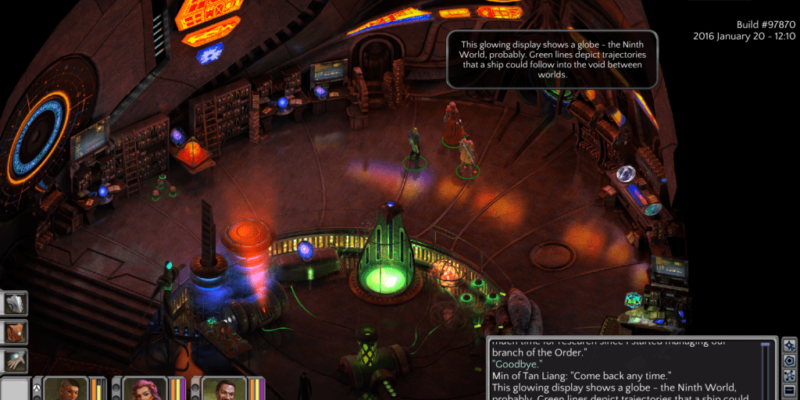 I’ve played about six hours of the recently-released Torment: Tides of Numenera beta, and I don’t want to play any more. Not because it’s bad. Quite the opposite: what I’ve seen of the game’s themes, characters, world, and (to an extent) combat and dialogue systems makes me want to hold off and revisit this title when it’s properly finished.

To be clear, Torment’s incomplete nature is no secret. This beta is an actual “things are missing and maybe broken, please give us feedback about bugs” type affair, pre-empting a release this week through Steam Early Access (which will probably be a newer build, but otherwise in the same style).

What’s available is certainly enough to give an optimistic impression of what the opening few hours of Torment’s completed form will be like, but aspects like missing scenes, stand-in user-interfaces, and uneven performance mean any players picking this up from Early Access will need to be committed to dealing with some major rough spots. 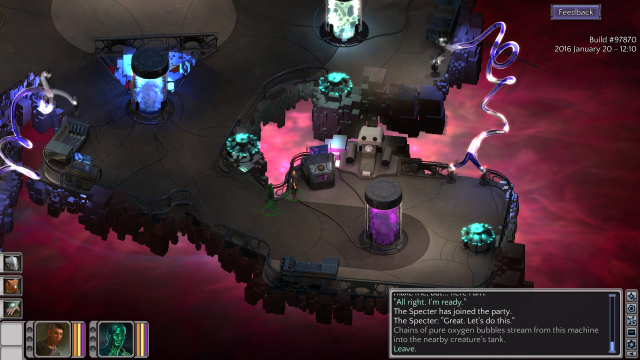 In this section you’re about to share memories with strange creatures in a room which is entirely inside your mind. Probably.

As most will know, Torment: Tides of Numenera is an unofficial successor to the much-celebrated RPG Planescape: Torment. That means no Planescape license (this game uses Monte Cook’s Numenera world instead), but an attempt to create a game that explores similar thematic ground. Aspects like recurring lives, personal and group morality, plus weird, multi-dimensional, techno-magical shenanigans.

Based on what your character learns during the beta area (and this information may be incorrect, or misleading for narrative purposes), the player is a ‘castoff’ from someone called The Changing God. This person (or deity) is prolonging their life by hopping between bodies, and, whenever they leave one, a castoff is created with a brand new consciousness and a specific tattoo mark. Already, players of Planescape: Torment will notice thematic and symbolic similarities to the original.

After an involved character creation process in which you experience a wealth of memories from other times and places (and make tricky philosophical judgments in each of them), your new protagonist quite literally crashes to the ground in the city of Sagus Cliffs, situated in Numenera’s Ninth World. Choices made during character creation determine your three main stat pools (Might, Speed, Intellect) and also define your starting tidal affinity. There are five coloured affinities, associated with philosophical outlooks such as individual justice, creative passion, the collective good, and so on. The implication being that this affinity will shift and alter, depending on choices made throughout the rest of the game.

Any additional effects of this affinity (beyond an indicator of your actions) weren’t immediately obvious to me, but may well reveal themselves as the game unfolds. 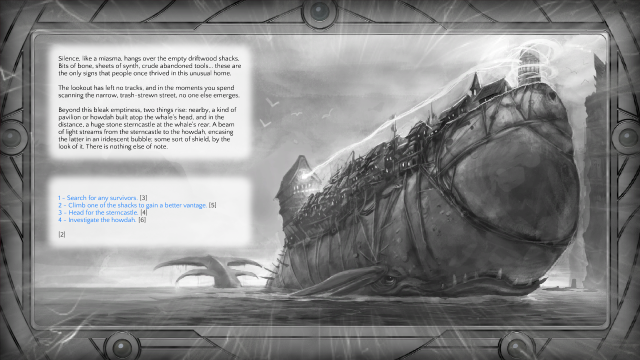 The Sagus Cliffs setting is a wonderfully bizarre place, and (like last year’s Pillars of Eternity) shows that a strong combination of descriptive text and art design can be just as evocative, perhaps more so, than cutting edge graphics technology. It’s a location awash with strange sights, like a gushing purple fountain of tiny, enigmatic fish, and rich with intriguing sci-fantasy ideas.

One of a great many pieces of inventive world-building involves the city’s levy system. Every citizen of Sagus Cliffs has to ‘raise’ a levy, and to do so they must willingly donate an actual year of their life, which then physically manifests as a guard. It’s a terrific, rather unnerving concept, and one that aptly demonstrates Torment’s other-worldly mixture of technology, magic and (in Sagus, at least) quasi-feudal city-states. There’s even an attendant side-quest which pokes at the rather more troubling side of the bargain.

The strangeness of the world and its language will end up as huge asset to the game, but the opening bombardment of concepts is a bit of a hurdle. Your first significant location in Torment’s beta is a multi-zoned city packed with a wealth of unfamiliar characters, ideas, and terminology. This pushes a huge amount of exposition (in what is, like its inspiration, already a very text-heavy game) right into the early hours. There’s a period in all RPGs of this type where narrative pacing gets temporarily abandoned in favour of players pursuing a check-list tour of “important characters and events in the city”, and it’s something none of them has ever really addressed with complete elegance.

Avoid being overwhelmed through this initial barrage though, and Sagus Cliffs feels like a fascinating place to inhabit. There’s a lot of weighty, sci-fantasy stuff to deal with, but the city also keeps the player somewhat grounded with universal constants like class divides, semi-familiar structures of government, and recognisable socio-economic development.

I love absolutely everything about that purple fountain.

Planescape: Torment was a title in which mandatory battles were a rarity. This is something which Tides of Numenera also appears to have taken to heart as a design doctrine. During those opening six hours or so with the beta, I engaged in a grand total of two mandatory fights (and one of those was a tutorial during character creation).

Several character abilities were not yet even present in this beta release, and combat systems and balance are unlikely to be final. Nonetheless, an early fight in the Reef (the outskirts of Sagus Cliffs) had some encouraging aspects to its design. With the right skills, it was possible to prevent the foes from healing, make use of multiple points in the environment (for buffs or damage), and even, potentially, just teleport away and make a run for it. The usual, turn-based “hit a guy with my current weapon” option was there too (and encompasses a flanking system), but there was a clear attempt to provide other, more thoughtful options.

Combat and dialogue-prompted actions alike draw from your character’s Might/Speed/Intellect pools. Attempting to heave open a hatch would check against Might, while an effort to steal something from a merchant would test against Speed. Most of the speech-related checks (persuasion, intimidation and so on) seemed to use Intellect. Each action has a base cost and estimated level of success (challenging, moderate, easy etc) and can be boosted a step further by ‘spending’ some of your pool.

Ultimately, this will leave you (and any companions you may have with you) short of each ability and in need of rest to top the pools back up. This, though, advances time. And time is something you may not always have in great supply for Torment’s quests. 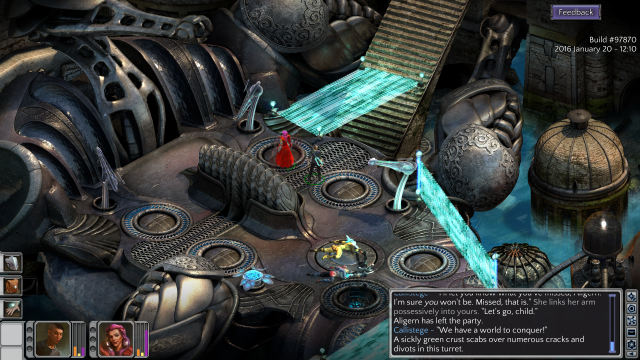 The aftermath of my one and only “proper” fight.

I’ll try not to outright spoil too much, but one early quest involves an execution that’s both extremely inventive and agonisingly slow. Opt to free the otherwise doomed fellow, and you’ll need to do so before his sentence fatally concludes.

Another quest-branch has players investigating a set of murders on behalf of a local underworld enforcer. Sleep on it for too long, and more people start dying. Named people. Ones you’ve interacted with, and who may (had you acted quicker) have been able to help with other quests. It initially feels unfair, how could you have known to prevent this? But that’s really the point. There’s a killer at large that you’re supposed to be investigating, and they’re apparently not going to stop until you get on with it. You did know this could happen, it’s just games don’t often follow through with their implied threats of consequence.

It’s too early to be making any substantive comparisons to Planescape, but I will say that Torment: Tides of Numenera’s opening hours are offering an interesting take on those familiar themes of immortality and rebirth. You’re another memory-scarred soul, having to deal with people who recognise your former self, wrapped in a pervading mystery about a borderline-immortal traveller and a malicious entity known as ‘The Sorrow’. In contrast to Planescape’s single ‘Nameless One’ entity, however, Numenera puts (or appears to put) the player in the role of one of many new conscious minds spawned when the Changing God moves out of a given body. It’s a subtle, but meaningful, shift in focus. 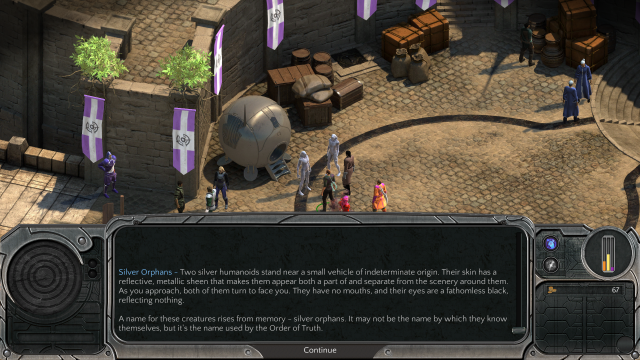 Honestly, some silver guys hanging around a space pod is mundane stuff for this world.

I want to pick at and unravel all of this stuff. The protagonist’s true link to the Changing God, why they still seem to retain echoes of his other selves, whether any of these theories are even true. But I want to do it when the game is in a finished state. If you’re the sort who’s willing to dive into incomplete titles and offer feedback, then the Early Access release may be for you. Those who lean closer to my own desires to wait should probably do so, because Torment: Tides of Numenera is a compelling beta that shows every sign of turning into a much better finished game.