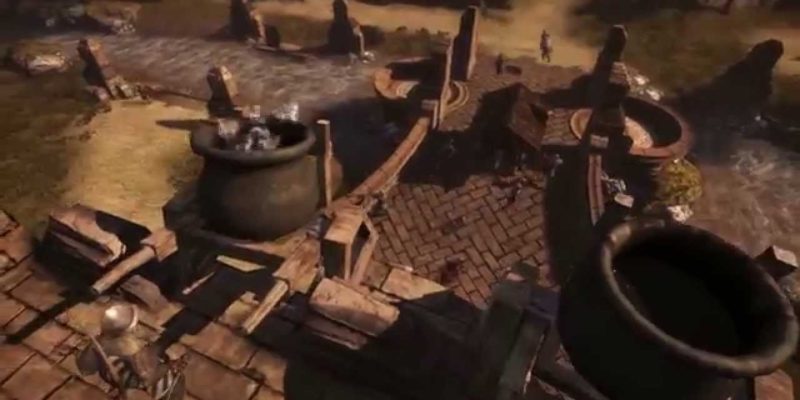 Incgamers recently caught up with Steve Piggott from Torn Banner Studios to talk about their newly released Chivalry: Medieval Warfare,  a game focusing on quality melee combat which includes team based objective gameplay, several classes, variety of medieval weapons and lots of dismemberment and decapitations.

IncGamers: Congratulations Steve on a successful release, lets start with the hardest first. What were your greatest challenges in developing Chivalry: Medieval Warfare? How did you overcome them?

Steve Piggott: There is a reason not many companies try to make first-person multiplayer melee games, and the reason is that its very, very difficult.

Chivalry has a diverse mix of elements from fighting games, RPG games and FPS games, blended into a combat system that uses both twitch-based reflexes and more tactical play.

On top of that players want as much control of their character as possible in a multiplayer game, so we can’t create static canned animations, we have to let the player adjust on the fly and feel like they are controlling their sword in realtime.

The blend of making the game both look and feel great is the toughest thing for us. We’ve done everything we can to make the game look nice, but at the end of the day whenever we were faced with a tradeoff we chose gameplay over looks.

IG: From the Half Life 2 Age of Chivalry mod, how did the Chivalry: Medieval Warfare game progress into a full game in terms of funding and conception?

Steve Piggott:  It has been an incredible experience for us to come from making “Age of Chivalry” – the free HL2 mod that you mention to now launching Chivalry: Medieval Warfare as an independent commercial title. It really just came from a belief in the potential of the game, we knew that if we could get it right then a lot of people would enjoy the game. Also when Epic Games announced that the Unreal Engine would be available for developers to create games without a huge upfront license payment, we knew we had to go for our dream.

IG: We’ve seen some impressive effects with Unreal’s game engine over the years, can you go into detail about any engine improvement’s you’ve specifically made to the engine for Chivalry: Medieval Warfare? Physics, clothing, hit-boxes, lighting, etc?

Steve Piggott:  I don’t want to go into too many specifics on the changes we’ve made to the Unreal Engine, but we definitely had to do a lot of networking optimizations to make it support a fast melee based multiplayer game.

IG: How did you go about building the AI? Can itself learn pattern’s and tactic’s of players to help raise their skill level? Can it take advantage of player weaknesses to help the player improve?

Steve Piggott:  The game is primarily a multiplayer title, so while there are bots available for offline play and practice, I wouldn’t claim the AI is anything spectacular or industry stretching. They act as competent fighters to help you learn the game and get to the core of the experience which is the multiplayer aspect of it.

Steve Piggott:   Character customization is very limited at release. It’s something our community has been vocal about wanting expanded, so we have some exciting plans there for future updates.

IG: Was there any game modes and concepts that didn’t quite make it Chivalry: Medieval Warfare due to constraints?

Steve Piggott:   Hundreds and thousands of ideas that didn’t make it. We’re proud of the game we’ve made, and believe we’ve reached our goal of creating the best melee combat game ever- but we know there are still a thousand ways we could improve or expand upon the game. For us that is what is so exciting about the game and the First-Person Slasher genre, there are so many ways it can still expand and grow.

IG: With the great feedback from your community, any current work in progress you can go into detail about?

Steve Piggott:   We have a lot of really fun ideas for future content updates. It’s a great time for developers to add to the core experience of the game and work without as much pressure, we are really looking forward to being able to add a lot of content to Chivalry after release. We’ve heard from our community a strong demand for more environments, new weapons and customization options so that will be a big  part of what we do.

IG: If you could pick one weapon and class from Chivalry: Medieval Warfare, what would it be,
why and what favourite tactics do you love to use with them?

Steve Piggott: I really enjoy the variety of playstyles that the weapons and classes offer, so ingame you will see me mix it up a lot. That said if I was forced to pick one I’d go with the maul, there is something so powerfully about dispatching your enemy with one powerful crushing blow.

IG: Where do you see games such as Chivalry: Medieval Warfare in 10 years time?

Steve Piggott: I see a massive potential for the First-Person Slasher genre, the widespread appeal of epic medieval hollywood movies is well known and the ability to immerse yourself into those experiences as a gamer is incredibly powerful. I am very excited about the idea of future titles in the Chivalry: Medieval Warfare series.

IG:  In future, do you feel virtual reality technologies may have a place in Chivalry’s realism or are mouse and keyboard the way?

Steve Piggott:  Our Lead Programmer has an Occulus Rift coming in December. When we get it we will doubtless play with it and see what it is capable of. Until then we really don’t know what to expect. I think there is definitely a future in some of these exciting technologies but the question is always a matter of when.

IG:  Did you use martial artists with motion capture technologies for the moves set’s?
If so, how did you go about finding them and adapting their moves to the style and right feel of the characters?

Steve Piggott:  We had one animator, and no motion capture at all. So it was all just from reference of our favourite movies and online research.

IG : Where does your inspiration come from when designing Chivalry: Medieval Warfare?

Steve Piggott:   Our inspiration comes from epic medieval and pre-medieval movies like 300, Gladiator and Braveheart, we wanted to bring that level of intensity and epicness to the hands of a gamer. We were frustrated by the melee mechanics in other games and felt that someone needed to finally do melee combat right.

IG : As most games head for accessibility for newcomers, yet contradicting depth for veterans, how do you feel you have achieved this?

Steve Piggott: I believe this is one of the areas we managed to excel in. The combat mechanics are designed to let players drop in and play with a basic level of success, but also allows you to become master swordsmen over time.

How flexible are the controls in Chivalry: Medieval Warfare? i.e. can I control the weapon swing with my mouse?

Steve Piggott: The combat is based on a system we call “real-time strikes”, this means you can adjust the path your weapon travels at any time with the mouse, giving you incredible control and precision of your attacks and blocks. The best way to think of it is that the WASD keys are your feet for movement, and the mouse is your hips, allowing you to turn into your strikes and follow your opponents actions. The combat is not designed to be a pure simulation, but rather provide players with the intense swordplay seen in epic medieval movies.

IG: How many game modes do you currently have Chivalry: Medieval Warfare?

Steve Piggott: First, decide if this is what you really want. A career in game development is hard, you will typically work longer hours than most and make less money. There will also be brutal crunch periods near the end of projects that can take a heavy toll on families as well as stress levels. That said, a career in games can be extremely rewarding as it allows you to create something that generates happiness and enjoyment for people all over the world.

If you decide this is what you want, then go for it- today, now. You have selected one of the most competitive job fields in the world. The only way to succeed is to strive to be the best, and it needs to be approached with the same mindset found in world-class athletes. Seek to improve yourself constantly, by an inch or a millisecond everyday, and you will succeed. Formal education can help, but never let this prevent you from gaining practical, real experience as soon as possible. Join mod/indie teams and constantly seek feedback from everyone and anyone. Those who grow the most, are those who receive the most feedback.

Here are some communities that might help you get started on a mod/indie project or give you advice on your discipline:

We wish you the best of luck in your efforts, Torn Banner Studios

Nintendo to sell Wii U at loss on launch

Interview: Talking rollback netcode and more in The King of Fighters XV with Yasuyuki Oda