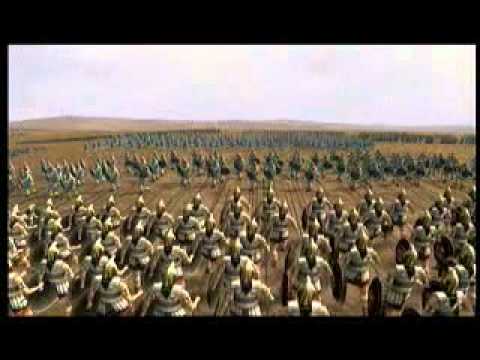 Thinking about it, I’ve played a pretty mixed selection of Total War titles. Thanks to the various peaks and troughs of what my various PCs of the time could handle, I’ve played the first Shogun, the first Medieval and (at a rubbish framerate,) Empire.

As you can see, there’s no Rome in that list. The closest I got to that was BBC2‘s slightly bizarre Time Commanders show, in which groups of professionals (accountants, firemen, nurses or whatever) would re-fight historical battles using Rome: Total War. It was every bit as weird and compelling as it probably sounds.

But here we are in 2013, I’ve got a proper computer and Creative Assembly has a new naming scheme. Total War: Rome II comes out later this year, and on E3‘s showing, it looks like its bringing some useful new ideas (and a few contentious ones) to the series.

Now you can roleplay a Paradox game in your Total War.

As you can tell from the campaign map above, Rome II will be a patchwork quilt simulator where players try to line up matching colours in attractive patterns. Alternatively, it’s an excuse to spread the game’s eight playable factions far and wide across the world. Dotted around the regions will be period-specific ‘Wonders of the World,’ like the Great Pyramids or Hanging Gardens of Babylon that can be captured for helpful strategic and economic bonuses.

Your cities will expand and sprawl as you pile more and more unit-producing buildings into them, and certain building choices will even show up on the campaign map itself. That should be a nice little bit of visual feedback, and could provide an at-a-glance idea of the types of structures an opposing city has in it. Find the places that have been constructing nothing but flowerbeds and crush them. The enemy, that is; you might want to keep the flowerbeds.

That’s largely visual bluster, but Creative Assembly’s rejig of campaign map diplomacy sounds like a more substantial change. In Rome II, you’ll actually be able to tell why all those painstaking non-aggression pacts you set up were all of sudden broken within a two-turn spell. This new transparency will let you look at the motivation for the AI’s actions, so you’ll be able to confirm that, yes, it was that time when you killed all of the factions allies and salted the earth where they lived that annoyed them.

Hi there! Just wondering if I could invade your land and enslave your people?

Victory conditions will be more flexible in this edition, allowing economic and ‘cultural’ triumphs alongside military ones. That sounds a little Civilization-esque and kind of odd given the name of the series is Total War rather than Total Economics, but I’m not going to complain too much about potentially expanding the variety of ways to play the game.

It was already revealed pre-E3 that Rome II armies can develop ‘traditions,’ battle bonuses that transcend the mortality of its individual units, but it’s probably worth mentioning again for those who missed the announcement. Traditions are an additional way that armies improve, alongside the usual road to veterancy. Getting an army wiped out will still reset all the battle experience (you’ll be hiring raw recruits, after all) but the ‘traditions’ of that force will live on.

Speaking of battles and troops, Creative Assembly have been using the Battle of the Nile as an E3 demonstration of the series’ latest approach to real-time confrontations. It’s a flashy affair with a broad selection of unit types, both land and sea activities and the Egyptian forces of Ptolomy XIII stationed on a hill above Caesar’s advancing legions.

E3 is all about visual spectacle, so there’s little doubt that this stand-alone historical battle was selected for its ability to dazzle with new features. The nitty-gritty mechanics tend to be a bit glossed over in trade event presentations like these.

That’s a bit of a shame from a tactical standpoint, but it does mean we’ve learned about a few more of Rome II’s added, altered and enhanced battle features.

First off, there are pre-battle defenses. In Battle of the Nile, that translated to burning bails of hay that the Egyptians were merrily rolling down the hill like giant cheeses at that odd Gloucestershire festival. This ploy, and others like cavalry-skewering stakes, have to be set up in advance, so if you put them in a boneheaded place they’ll end up being useless.

Something that’ll probably have the Total War community in heated discussion is the arrival of ‘capture points’ on regular battlefields. It’s hard to say if they were present for this specific battle (a stand-alone, defensive, historic one,) or if capture points are now all over the place and not just there for sieges. How well these are received will probably come down to their ubiquity and their function.

Ships can now hang around in battles involving regular troops (some Egyptian and Roman vessels face off during Battle of the Nile,) and deploy reinforcements onto land if they’re not too busy trying to avoid being rammed or bombarded by rival boats.

If you think you can win this fight, you must be in the Nile. In DE-Nile. Shit. Puns are hard, folks.

Creative Assembly are pretty keen on showing off weighty unit actions like ramming, because all battlefield actors now have a ‘mass’ rating attributed to them. If they throw themselves at the enemy at speed, people go flying. In the case of a chariot going downhill into a squadron of people wearing little more than paper bags around their genitals, you get a scene like Neo vs the multiple Agent Smiths from the Matrix trilogy.

Or consider the case of War Elephants, which now have something described as an “internal rage meter.” If the betrunked animals get too irritating, they may just go on a rampage through your own lines, trampling all beneath them. At that point, you’ll have to decide whether to try to keep out of the way or step in for a mercy killing.

The new ‘unit camera’ function, which snaps your point-of-view to that of a particular soldier or war machine in your army seems to have pretty much been specifically designed to show off the new mass/impact physics. In battle, it surely won’t have much of a practical use.

News of the falafel sale at the Egyptian catering tent had spread fast.

At this point the Total War series is something akin to the EA Sports catalogue. Not in terms of tone or theme, but the fact that the basis of the game is now pretty much settled and new versions exist to add iterative improvements and try out the occasional new idea. That’s not an indictment, just an acceptance of the fact that its difficult to make huge, innovative strides when you’re effectively tweaking an established model.

Fans of the series will need more than the broad, glamourous flourishes of an E3 presentation to be fully convinced of these additions and changes. Transparent AI diplomacy on the campaign map, if it functions as intended, sounds like an encouraging, welcome change. Impact physics are a neat visual bonus, but shouldn’t have much baring on the underlying tactics of a battle. Capture points? Without more information as to their function, it’s difficult to make a judgement.

Creative Assembly has brought plenty style to E3, but more of the substance remains to be explained.

Total War: Rome II will be released on 3 September.

Dive in. It’s the first World of Diving gameplay trailer