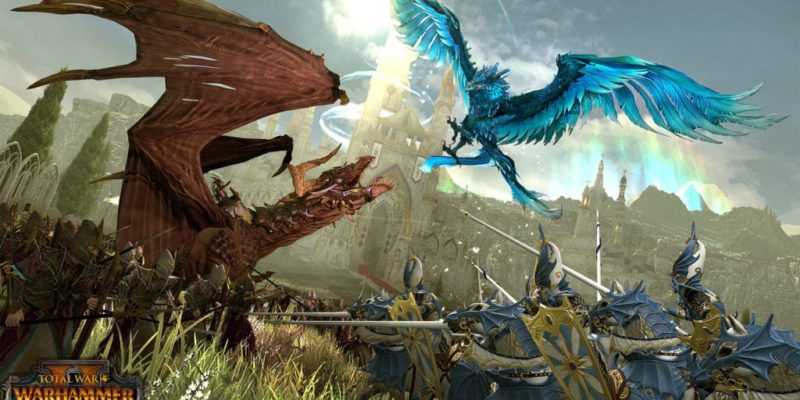 Since it’s my sworn mission in life to write every news piece about Total War: Warhammer 2, it makes sense to have a centralised PC Invasion hub for all that information. To that end, I’m resurrecting ‘Everything You Need to Know’.

On this page you’ll find all the details released to date about the game’s four (yes, it’s definitely four) factions, any mechanical changes confirmed by Creative Assembly, and all other miscellaneous information that I think might be of interest to Warhammer players.

It’ll be updated regularly. Here’s the date it was last altered: 31 August 2017.

So what’s Total War: Warhammer 2 all about then?

Four more factions (at launch, anyway; always expect DLC) from the pre Age of Sigmar version of the Warhammer tabletop game, fighting it out in new parts of the world. Last time it was the Warhammer version of Europe. This time it’s the game’s version of the Americas (with a bit of Africa). Creative Assembly have added a narrative objective that all factions will now pursue (more on that in the Campaign section below); there’s a mystical Vortex that all of the races want to harness to their own ends.

Tell me about these four Factions.

Strictly speaking I can only tell you about three of them, because Creative Assembly are still pretending one of them doesn’t exist (it’s a whole in-fiction bit). It’s pretty clear who they are, though. Here’s who’ll be showing up on the battlefields of Total War: Warhammer 2.

Lizardmen: AKA Games Workshop decided a combination of Aztecs and dinosaurs would be cool (and they were right). Located in the jungles of Lustria (Warhammer South America) and ruled over by the ancient Slann Priests (extremely powerful sorcerers who are also toads), the Lizardmen are basically grown in magical Temple cloning vats. They want to get hold of the Vortex for purposes that are probably neither good nor evil, just part of the Slann’s Great and Ancient Plan™. You can read their full unit roster here.

High Elves: AKA pretty boy aristocrats with embarrassing family secrets. They live on Ulthuan, a circular land-mass that doesn’t really have a real world equivalent (unless it’s Atlantis or something). High Elves created the Vortex as a cosmic siphon for all the excess magic in the world, which would otherwise float off and feed the hungry Chaos hordes. It’s in their best interests to protect it, and keep it functioning in much the same manner. You can read their full unit roster here.

Dark Elves: AKA “Shut up mum, it’s not just a phase!” Ultimate edge-lords and BDSM goth club patrons. They’re also total bastards who keep slaves, delight in murder, and have an eternal civil war with the High Elves because their boss Malekith was snubbed for the throne back in the day. The Dark Elves live in Naggaroth, which, despite being dubbed ‘The Land of Chill’ is neither a relaxed nor easygoing place. It’s roughly in the Canada/North America spot. Dark Elves almost certainly want to destroy the Vortex in order to vanquish the High Elves, because there is no greater triumph than antagonising High Elves. You can read their full unit roster here.

Skaven: AKA Final revenge for all those ‘fetch ten rat tails’ quests in RPGs. After a lot of teasing and messing about, the Skaven were revealed on 16 August 2017. They want to harness all the lovely power of the Vortex to themselves for nefarious rat-purposes. Their Legendary Lords Queek Headtaker and Lord Skrolk will be popping up in the Southlands and Lustria, respectively. You can read their full unit roster here.

I played Total War: Warhammer, how is the sequel going to play differently on the campaign map?

The main structural change is that all factions (AI included) will be working towards their own goals with the Vortex. Specifics about progress towards that goal aren’t really clear yet, but it will include completing quests, capturing certain areas, constructing certain buildings, and the like.

It is also still possible to win Total War: Warhammer 2 through sandbox conquest. There are fewer restrictions on where factions can settle than in the first game. You can conquer and settle anywhere, but the factions do have preferred climates and will take penalties (growth, build times) for building outside of these.

While on the subject of building, settlement slot changes are coming to the sequel too. The vast majority of settlement types will receive more slots. Read this summary for further details.

Campaign map size is said to be comparable to the first Warhammer game. Lords and generals will receive traits in the manner added by the Bretonnia DLC. That is to say, if one of your guys has murdered countless armies, they’ll get a relevant trait. If they spent their time doing city admin, they’ll get one for that. They’re no longer just random.

Ocean hazards will be present, creating some risks when travelling by sea (no naval combat, it’s still just transport based). Ruins on the campaign map can be raided, which will trigger a short choose-your-own-adventure style narrative that will end with a reward or a minor debuff. Bridge battles are going to be returning, and a new battle type called Fortress Gates will be included. Certain areas of major strategic interest (ie; the entrance to Ulthuan) will have Fortress Gates. The owners can pass through, attackers will have to fight a siege battle.

Here’s the full regional map. Click for a larger version. 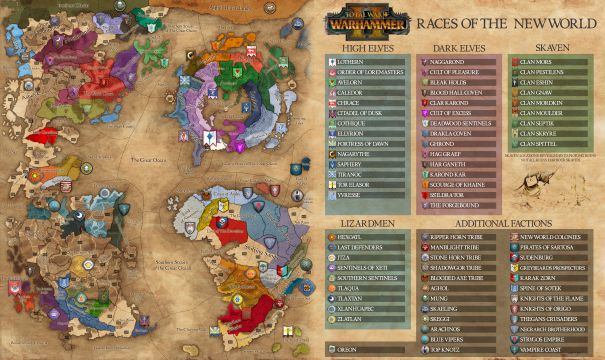 What’s all this about a combined campaign map?

Some time after the release of Total War: Warhammer 2 (Creative Assembly haven’t confirmed an actual schedule), there will be an open beta for a combined campaign map. People who own both Warhammer titles will, ultimately, be able to fight a sandbox campaign (no Vortex stuff) across both Old and New Worlds with all the factions. It will be a free DLC release.

According to this Creative Assembly employee, you won’t need to have the first game installed to play as the original factions on the combined map. Ownership of Total War: Warhammer will be enough.

How about the tactical battles? Any changes there?

A few, yes. As mentioned above bridge battles are back. Creative Assembly have said the AI will be better equipped to deal with choke points in Total War: Warhammer 2 (which should also improve their abilities on other maps with narrow geology). They’ve said they want to focus on more map variety in general.

There are promising signs that tree-heavy maps will be an improvement over those found in the Wood Elf expansion, too. In the battle gameplay between High Elves and Lizardmen there was plenty of jungle foliage present but it wasn’t obscuring the entire field.

Factions will have special army abilities on the battlefield. These can be linked to building chains, or to ‘rites’ performed before battle (the specifics of those aren’t yet clear). Lizardmen, for example, can summon feral Cold Ones in certain circumstances. As with other battlefield abilities, these faction ones will have limitations and cooldowns.

Magic is said to be getting “rebalanced” across the board. Creative Assembly haven’t talked about the magic Lores to be featured in Total War: Warhammer 2 yet, so further details about magic are still to come. We do know that the skill trees have been reworked so that the first skill point conveys the spell, the second the ability to overcast, and the third a Winds of Magic cost reduction.

In addition to all that, dragons will have breath attacks in the sequel. Dark Elf dragons can breathe noxious gases, for example.

Since DLC is inevitable for this game, which races will be added with expansions?

Hard to say exactly, but Tomb Kings are strongly rumoured for an early addition. Total War: Warhammer 2 adds the Southlands region where they reside, so that does make a lot of sense. What we do know is that for the first expansion Creative Assembly are going to ditch the usual mini-campaign and instead provide four Legendary Lords (instead of two) and more units.

There’s also a free faction DLC for pre-ordering the game. It’s one for Warhammer though, not the sequel. If you buy Total War: Warhammer 2 between now and one week after release (so, early October) you’ll get the Norsca lads for the first game. Full details and their unit roster can be read here.

Other than that, expect a similar set of expansions, lord packs (think King and the Warlord) and free DLC for Total War: Warhammer 2.

I like modding things in Warhammer, can I do it in this game too?

Yep. They are two separate games, so if you want to use mods from the first game in the sequel it won’t be as easy as just copy-pasting the files over. However, Creative Assembly have said that mods (with some work) should be compatible with the second game.

Modding tools for Total War: Warhammer 2 will, according to Creative Assembly, be released shortly after the game comes out. They should provide the same range and scope for modding as the first game.

Any significant changes to multiplayer?

The main one mentioned so far is the addition of a four player Free For All mode. You can read about FFA here. People who own both games will be able to use all the factions in multiplayer matches. Co-op is still going to be limited to two players.

Despite many requests, Creative Assembly have so far ruled out army customisation (paint schemes, banners, etc) in Total War: Warhammer 2.

When’s the game going to be out? And I suppose I’ll ask myself about a Special Edition as well.

Total War: Warhammer 2 will be released on 28 September. It has an expensive Serpent God Edition with all the trimmings, if that’s your sort of thing.