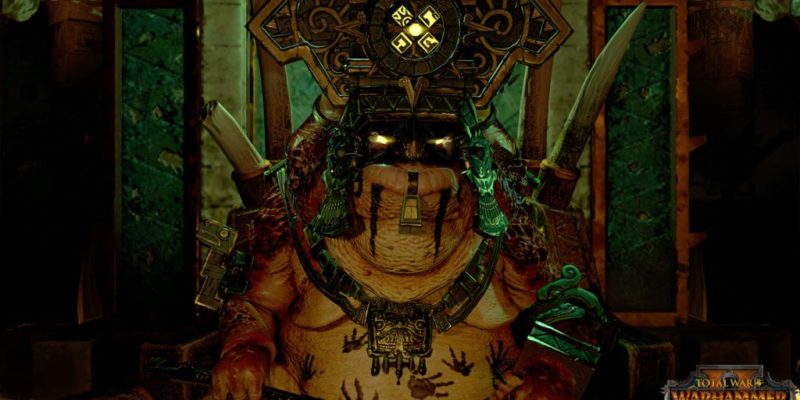 Creative Assembly have wrapped up a Facebook presentation discussing the Lizardmen in Total War: Warhammer 2, and released a full army roster. The roster linked there has the bulk of the information in it, but the stream included a couple of additional details.

Specifically, the end of the livestream (around 36:30 or so) its mentioned that “all characters in this army have the Cold Blooded healing ability”. You can apparently order any Lizardmen units to fall back and heal; however, they will be weakened during this healing process. Not something to try while you’re in combat.

The Lizardmen’s lore of magic hasn’t been detailed today. That’s promised soon. It was also stated that all of this stuff is “in progress” development on Total War: Warhammer 2, so there could be some changes before release. I’ve rearranged the roster to be a bit friendlier to read, and added a few bits of info mentioned during the stream.

Lord Mazdamundi is the oldest and most powerful of the living Slann Mage-Priests. With a matchless mind unfathomable to others, Mazdamundi is obstinate in his ways and will not be deterred from that upon which he has decided. Although it took many interruptions to his thoughtful contemplations, at last the great Mazdamundi has stirred himself, shaking off the lethargy that has afflicted so many of his kind.

When riled, the Lord of the Solar-City will levitate his palanquin-throne atop the largest Stegadon that can be found. The current beast, a colossal specimen named Zlaaq, has served Mazdamundi for almost five hundred years. Once aloft on his mount, Mazdamundi will march out at the head of the armies of Hexoatl. With a flick of his wrist, Mazdamundi has smashed cities and doomed armies. His Great Purpose does not allow for mercy…

Kroq-Gar is an ancient Saurus, the last remaining warrior from the now ruined temple-city of Xhotl. It was none other than the great Lord Mazdamundi that summoned Kroq-Gar to his temple-city, choosing him to lead the great Saurus armies that remained. Since that day, Mazdamundi has assigned Kroq-Gar the sacred task of exterminating those creatures not part of the Old Ones’ Great Plan.

Over this long existence, Kroq-Gar has fought many wars – leading the armies of Hexoatl, or joining other hosts to aid them in battle. There is no continent upon which Kroq-Gar and Grymloq have not fought, but for the last defenders of Xhotl, the battle is not yet over.