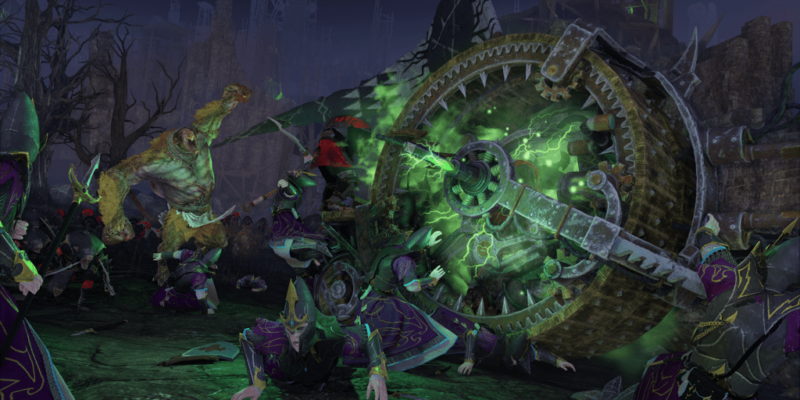 After Wednesday’s confirmation of the Skaven as Total War: Warhammer 2’s fourth faction, Creative Assembly have now revealed the full unit roster. In the usual manner this was done first via livestream, and the compiled in a blog post.

The livestream included a few more details about the nature of the Skaven faction in the sequel, which I’ll try to compile throughout. In short, the Skaven are a “strength in numbers” force. Some units quite literally will work better with more Skaven around. It was also mentioned that, as rats, they like to scurry away (meaning as they rout, they speed up). From prior releases we know too that the Skaven army can summon a limited number of units out of nowhere in a manner similar to necromancers raising zombies.

As previously revealed (but maybe you missed it), the two Skaven Legendary Lords are Queek Headtaker (Clan Mors) and Lord Skrolk (Clan Pestilens). Here’s more on them, and the full Total War: Warhammer 2 Skaven unit roster.

Warlord Queek Headtaker, is the legendary, and much-feared, Great Warlord of Clan Mors and the personal right-claw of Warlord Gnawdwell, the one and true Grand Ruler of Clan Mors. Queek has been groomed by Gnawdwell from the moment of his birth to be the ultimate warrior, provided with the best armour and weapons, protecting him from the other Lords of Decay, and also staging assassination attempts to keep him on his toes. Queek is an uncommonly bloodthirsty and egotistical warrior whose need to conquer even the most impossible challenges has since earned him an infamy amongst the annals of Skaven history as the legendary Headtaker, the Dwarf-Smiter, the greatest Warlord to have ever graced the tunnels of Skavendom.

Queek’s temper is infamous amongst both his enemy and allies, having fought, defeated and survived almost every challenge that was thrown against him. Upon his trophy rack consists of the heads of all those that have challenged Queek in the past, such as the head of King Krug Ironhand of Karak Drazh, Warlord Ikit Scratch of Fester Spike, Warlord Sleek Sharpwit of Clan Mors and the hand of Baron Albrecht Kraus of Averland amongst other noteworthy challengers.

Lord Skrolk, is one of the most legendary disciples of decay within Clan Pestilen and one of the 9 legendary Plaguelords. That Lord Skrolk walks the world is an affront to nature and a sign of the power of the Great Horned Rat. Plants wither and die where Skrolk treads and the very air seems to congeal and darken, as if stained by his baleful presence. Skrolk is ancient, having existed many spans of even the most long-lived of his foul kind. Rather than weakening with age, Lord Skrolk is possessed with a diabolic vitality that belies the years and the heaped diseases he carries.

Indeed Skrolk is bent and gnarled by the weight of countless corruptions. The flesh that is not hidden by his tattered shroud is leathery and covered in a layer of dripping buboes. Even worse, the mysterious hunching growths promise something still more virulent. Each new pox only toughens the aged Plague Monk, who himself has become a disease that walks. Lord Skrolk is one of the Plaguelords, the rulers of Clan Pestilens under the direct command of Arch-Plaguelord Nurglitch, he-who-is-tenth on the Council.

Rat Ogres (Monstrous Melee Infantry). Faster than trolls. High charge bonus.
Hell Pit Abomination (just a straight up monster oh god). Regen and Rebirth (like High Elf Phoenix). Also has ‘Too Horrible to Die’ (if it does so, Skavenslaves unit pops out).

Fortnite Survival Mode coming at the end of August