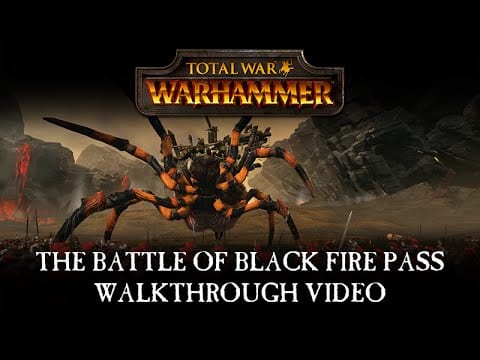 This video was first shown at E3 but was not publicly available until now. The video features a battle between the Empire led by Emperor Karl Franz and a Greenskin horde led by Orc Warboss Grimgor Ironhide.

According to the video itself, this battle will be part of the Empire’s quest-line, triggering once Karl Franz is sufficiently levelled up. This suggests Total War: Warhammer will have slightly more of a narrative structure than the more open-ended battlefield affairs seen in previous Total War titles.

Commentary is included so you know exactly what’s going on as the two forces clash on the battlefield. The battle is described as scripted, and is denoted as alpha footage. So it’s work-in-progress stuff to an extent.

Interesting features on show include flying units in combat, powerful spells (with the caveat that Creative Assembly don’t want to make these too overpowered,) and first person unit control on the flying Doomdiver unit. You’ll also see plenty of classic Warhammer units in action, like vomiting trolls, Imperial Outriders, and Wyverns.