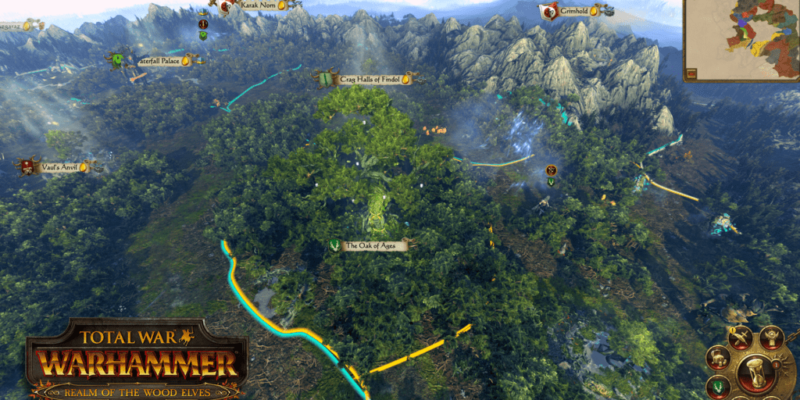 Creative Assembly have released details of Wood Elf Legendary Lord Orion’s abilities, ahead of the upcoming DLC for Total War: Warhammer. If you’ve followed their pre-release marketing process before, you’ll know how this works; it’s an image of Orion with a few of his skills summarised.

From that, it’s possible to glean a fair bit of information about the big buff demigod-elf. One of his quest chains will result in securing the Horn of the Wild Hunt, which can give Wood Elf units a charge and speed buff. The sheer presence of Orion (The King in the Woods) can spur the Wood Elf troops into moving faster too. He can also summon dogs. That sounds fairly cute, until you read that these dogs are a “roving vortex of canine savagery”.

Orion is handy to have around for arrow buffs too. Asuryan’s Command grants a “faction-wide missile damage buff”, while Prey of Anath Raema will weaken foes against arrow fire. Plus, Orion has some magic arrow powers of his own in the form of Hawk’s Talon (a bombardment of shards from the sky).

The Wood Elves will be emerging from the trees of Total War: Warhammer on 8 December. 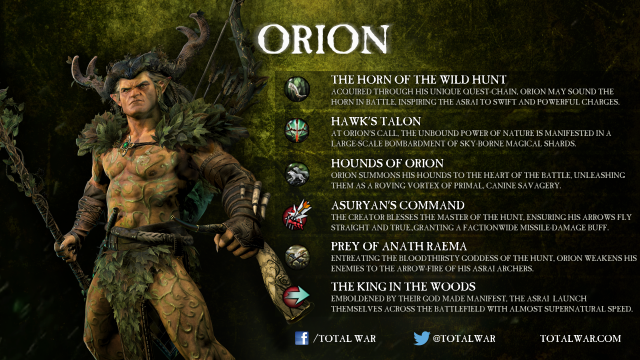