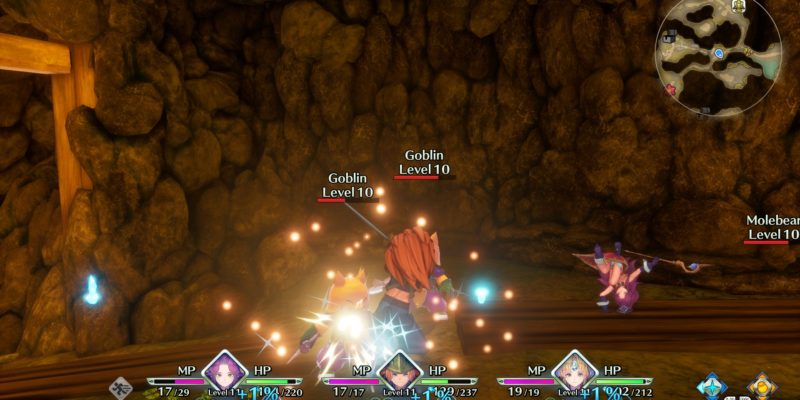 It took over 20 years for Seiken Densetsu 3 to get an official English release in Collection of Mana, yet now it also has a full remake in Trials of Mana. Funnily enough, this is Square Enix’s second remake this month of one of its much-loved ’90s RPGs.

But they’re of course quite different. While that other game (you know the one) serves as a total reimagining and just one part of a new interpretation of the events of its original incarnation, Trials of Mana stays very close to Seiken Densetsu 3, for better or worse. To be sure, it’s a worthwhile experience, but some of its dated aspects and cut corners will possibly irk anyone expecting any kind of new epic.

Trials of Mana‘s initial release may have come out around the same time as SNES RPG masterpieces like Chrono Trigger and Final Fantasy VI, but it didn’t have nearly the same level of quality in its writing. Where those latter games weaved complex narratives with fascinating characters, Trials is simple, familiar, and populated with one-dimensional archetypes. The dialogue can be aggravating and the presentation of the cutscenes is far below AAA quality, with a lot of recycled animations and poor dialogue and camera work. 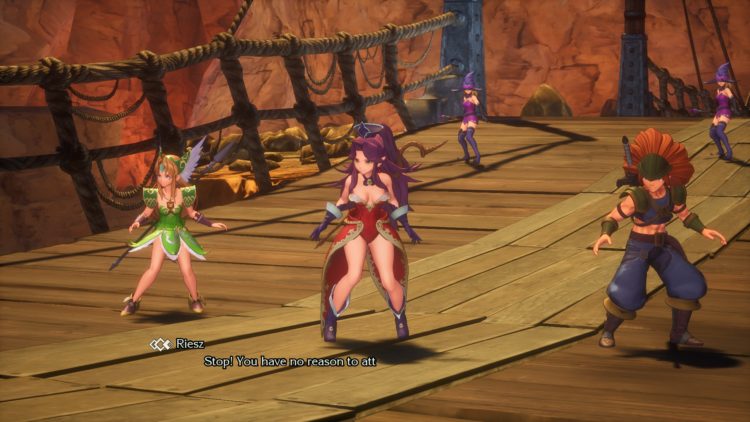 But it has a truly unique feature. There are six playable characters in Trial of Mana, and you select one as your main character and two more as companions. The game has three final boss encounters according to whom you choose as main character, and if two of your characters have the same enemy in common, it will lead to interactions between the two during the story. However, if you pick characters without a common enemy/storyline, your characters will barely interact.

It’s really weird, seeing as party-based RPGs typically try very hard to establish relationships between party members. In Trials of Mana, they often barely acknowledge each other’s existence. At the same time, though, mixing and matching these six characters can make for markedly different sequences of events, which massively boosts replay value. It’s too bad the actual narrative is so bland and uninteresting, as it mostly focuses on our heroes seeking out MacGuffins that contain monsters, fighting them, and freeing elemental critters.

The secret’s in the sauce

Thankfully, Trials of Mana‘s combat fares much better than its narrative. It’s a pretty basic action RPG. You can freely switch between characters, and battles occur within the field in real time. Each character has a basic attack and a power attack that can be charged, often to break an enemy’s guard. Additionally, power attacks can be used for other moves during combo strings, a la Dynasty Warriors. Characters learn spells that can be accessed via a menu that pauses the action or is bound to one of four quick slots. 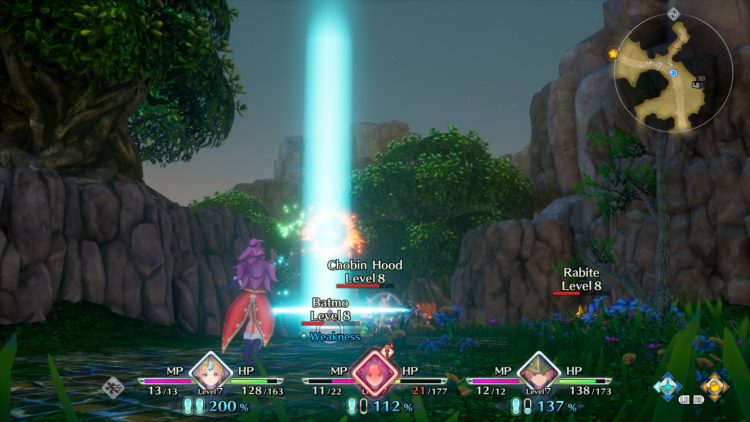 Additionally, characters have special moves that use up at least one bar of what’s basically their super meter, and they have an MP gauge for magic spells. They can even be equipped with abilities that grant them extra benefits, such as healing or recovering MP after a fight or increasing how much magic damage they do. Most of these are learned by putting the talent points accrued by leveling up into one of several stats, but some can only be found by talking to other characters.

The combat is fast, responsive, and entertaining, with most battles not taking long at all. Your characters also have a useful dodge that can be used to evade incoming attacks. The combat doesn’t have a ton of depth, but it does grow more complex as time passes since characters can switch to new light or dark classes that change their stats and offer new abilities. They even get a costume change when their classes are switched. It really does change up their play style a fair amount too. For instance, Duran’s second class’s light path can turn him into a healer that focuses on defense, while his dark path makes him stronger and gives him the ability to cast elemental properties onto his and his teammates’ weapons. This is true for subsequent class changes as well.

The combat isn’t without its wrinkles, however. The biggest issue is that your AI teammates are just kind of terrible at keeping themselves alive. Every time I took my eyes off them, I felt like they were losing all of their health. You can change individual members’ AI tactics in the menu, but there’s not really any alleviating this unless you just let them use healing items. It’s not ideal. 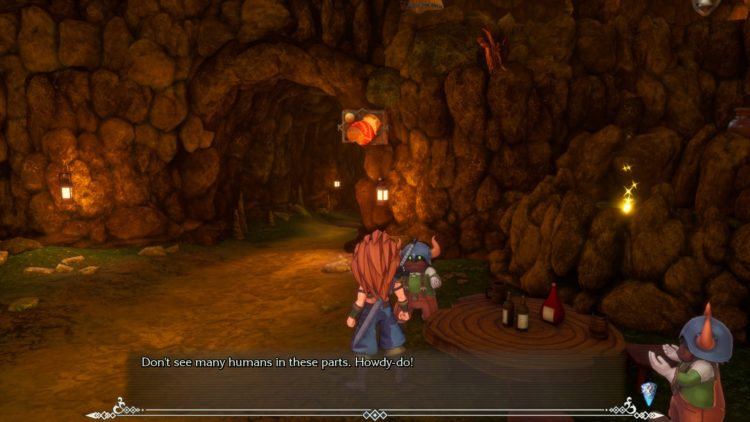 Another issue I had was how enemies can attack your character the exact second they finish using a super ability. You pull off a move, only for an enemy to queue up their own, which then hits you in the face while you’re powerless to defend yourself. There’s not really anything you can do about this either. This is mostly only a problem during boss battles though, which are the only time that Trials of Mana will likely give you any grief. It’s not a hard game overall, and healing items are insanely easy to accrue.

Trials of Mana is fairly simplistic graphically. I think it looks a lot like a game from 10 years ago, albeit with modern textures. It’s made using the Unreal 4 Engine and the characters all look like plastic dolls, which is weird. I feel that way about a lot of Unreal 4 games, though, so maybe that’s just me. The animations are simple and occasionally repetitive, and the overall aesthetic can be described as “generic fantasy.” It’s not a bad-looking game; it just clearly didn’t have a large budget to work with.

Strangely, the PC version of Trials of Mana has practically no graphical options. I expected there to be settings for draw distance, textures, and the like, but instead all you can change is the resolution or frame rate cap. A mod has already addressed this though. 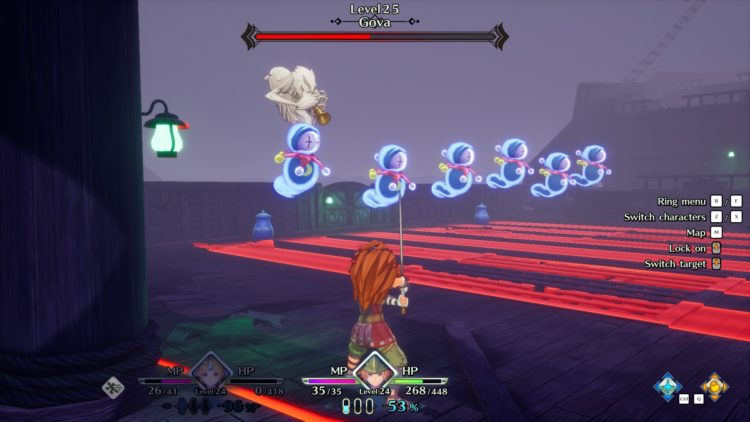 Trials of Mana isn’t an obscenely long game by any means, but it will likely take most players a couple of dozen hours. Trials of Mana does have a new postgame episode that has some fun surprises in store. Once you beat it, you unlock New Game Plus, but the enemies sadly don’t get stronger. You do get to keep all the skills you unlocked and start over with the three characters you didn’t pick the first time around though. Or you can run with the same three again and laugh at how the enemies don’t stand a chance against their levels.

I like Trials of Mana a fair amount. It’s not the prettiest game around and its story and characters might be somewhat vexing, but it’s entertaining. Plus, it’s fun to play a game in the Unreal 4 engine that’s so noticeably rooted in mid-’90s game design. From what I understand, areas all have the same layouts, and the entire structure of the game is extremely similar to that of the original. But I found this game enjoyable in spite of some issues. It’s also great that we got it the same day as Japan instead of having to wait two and a half decades this time.

Trials of Mana is an entertaining game with grating, simple characters and a subpar story, but the fast action and colorful exploration make up for those issues.

Viking-themed Assassin’s Creed is being teased live, may be called Valhalla [Updated with reveal date]

By Logan Broadley25 mins ago
Reviews

By Kurt Perry23 hours ago
Reviews