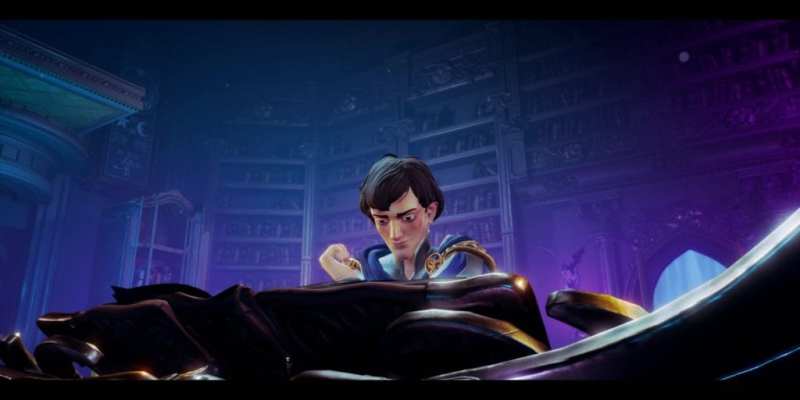 The Trine 2.5D action platforming adventure game series is best known for its gorgeous artwork and three distinct heroes who must use their combined abilities to overcome challenging puzzles and boss creatures. Finnish developer Frozenbyte keeps the tradition going with Trine 4: The Nightmare Prince, which brings the band of heroes back together again for a new trek across gorgeous environments filled with fantastical creatures.

Playing through much of Trine 4’s first act felt a lot like putting on a comfortable old coat. It’s been four years since the last game released, and the franchise itself recently marked its 10-year anniversary. I played the previous three games and was familiar with the trio of heroes and their basic abilities.

There’s Amadeus, a wizard who can levitate and conjure objects – especially boxes – to build bridges, get to hard-to-reach areas, and occasionally drop them on enemies. Then there’s the knight Pontius, who is armed with a sword and shield. His strength can break through certain obstacles while his shield can reflect projectiles. Lastly, there’s the thief Zoya, who carries an extremely versatile bow and arrow and uses a rope to get around obstacles. 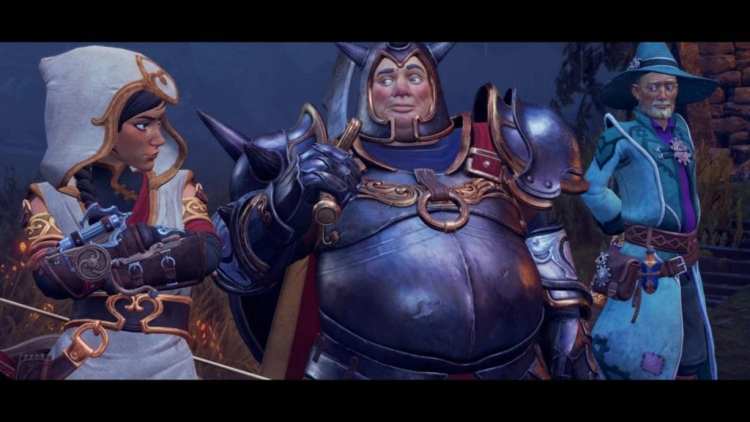 Zoya, Pontius, and Amadeus are back to adventuring and saving the kingdom.

Find the prince, save the kingdom

In Trine 4, the three come together again to seek out Prince Selius, a powerful magician who has run away from the Astral Academy. His nightmares — full of wolves, spiders, and other fearsome creatures — are manifesting in the real world, and the trio must help him before they threaten the kingdom.

Much of the game involves switching between the three characters to solve puzzles in conjunction with each other. For instance, one puzzle requires Amadeus to summon and strategically place a box that Zoya attaches a tightrope to. Then Pontius walks the rope, placing himself under a water pipe to redirect the flow using his shield.

Solutions aren’t always clear-cut, but I was able to get through most puzzles without getting stuck for too long. Trine 4 uses light for the first time as a puzzle-solving element, where sunlight can be reflected off Pontius’ shield and other objects to solve puzzles and combat enemies. 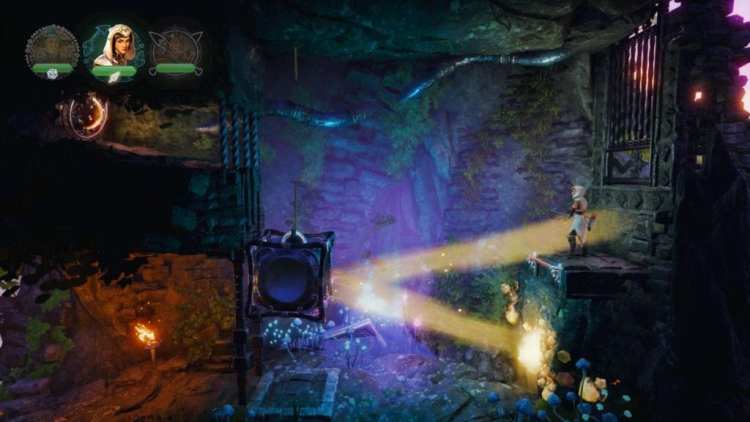 Reflecting light is a key part of Trine 4.

Although I experienced an issue where I accidentally dropped an important item down a bottomless chasm and couldn’t figure out how to reset the puzzle without quitting the game, I didn’t become seriously stuck until near the end. A locked door puzzle had me stumped and I had to think extra creatively to position my characters correctly.

The game includes a hint system that kicks in after a set time, but it’s usually more of a nudge than an actual solution. Zoya’s voice may call out to Amadeus for a conjured box, which players can infer a tightrope setup from. Unfortunately, the hints aren’t completely contextual, so these little call-outs aren’t very useful when you’ve already figured those elements out but are stuck on what to do next.

Hints that have the three saying in succession, “I could summon a box. A rope could come in handy. And so would my shield,” are barely any help because that advice pretty much applies to any puzzle. It’s a little like putting furniture together without instructions. You have a general idea of how everything should fit together, but it’s hard to pinpoint what’s missing.

But even though I don’t think the hints guided me much, I have to admit that I was eventually able to solve all the challenges without being too frustrated. 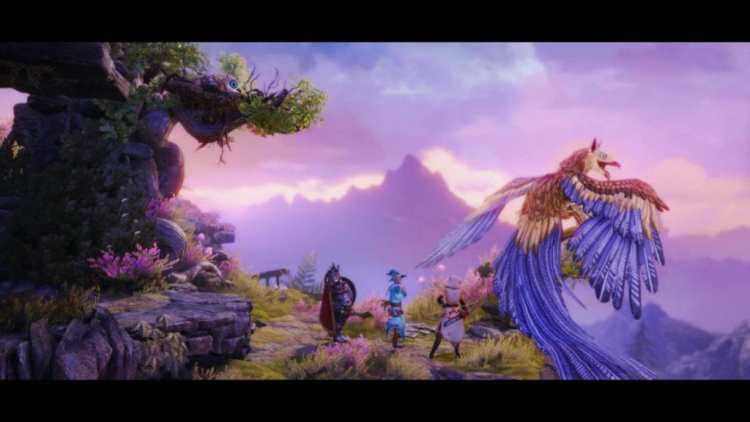 Fighting as a team

Players have the option to use either a keyboard and mouse or a gamepad to play. Both work well, but I chose to use the mouse to better control levitated objects and switch between characters using the number keys.

Trine 4 plays exceptionally well for the most part, but things got a little sticky for me during combat sequences. Dealing with multiple enemies became a challenge when ranged foes became involved. Then things grew doubly hard when boss creatures entered the mix.

I ended up using Pontius most of the time since his stomping ability does tremendous damage and can hit multiple enemies. Amadeus can drop objects onto enemies, but battles often required more speed than he was capable of. Zoya is a good backup combat character, but her arrows don’t do enough damage to justify the long draw time with her bow. 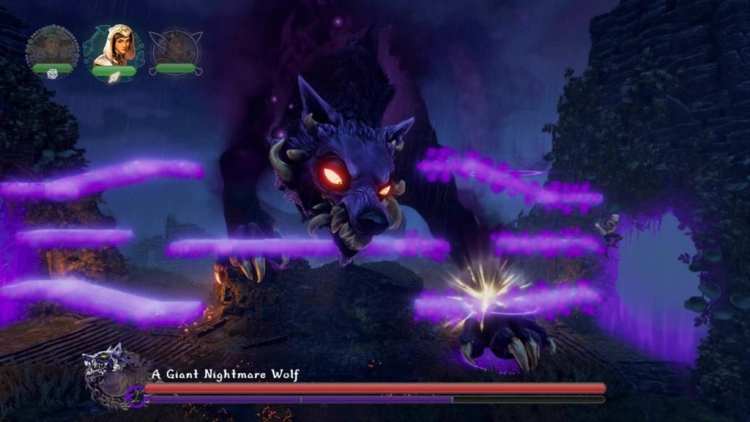 Her hits become more powerful later on when she acquires elemental arrows, and the other two also unlock new abilities that assist in combat. Amadeus can drop objects with great force while Pontius can shove enemies and objects across the room. Still, I relied mainly on the guy with the sword to do most of the fighting.

I would have also liked to see more environmental interaction during the fights. There’s one battle where reflected sunlight is used against a foe and a stage where a giant nightmare wolf literally chews up the scenery, but there’s not much beyond that in the first act. The game doesn’t have much in the way of pulling down a bunch of stacked boxes onto foes or rolling a boulder over small enemies.

Also, boss fights usually amount to figuring out what the creature’s weakness is and doing your best to exploit it, which can limit your options. For instance, defeating the wolf requires a heavy attack, but Zoya doesn’t have one and Amadeus’s constructs are often too fragile to get into position. So, things fell to Pontius. 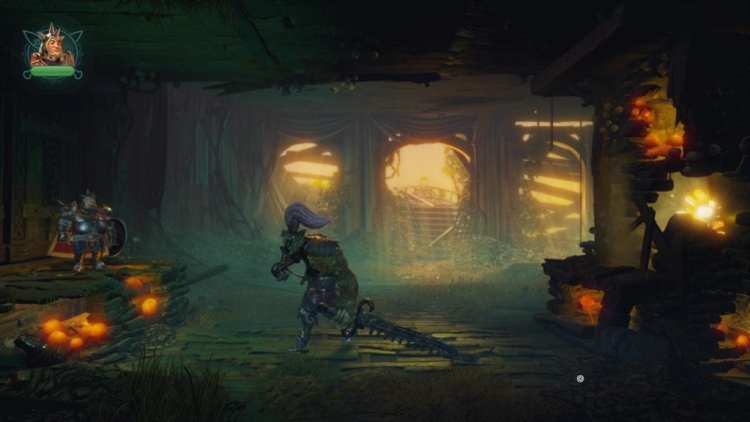 Fortunately, the game is pretty forgiving. Defeated characters have a reset timer, so players just need to survive long enough to get their characters back. That’s sometimes easier said than done, but it’s a major advantage.

Additionally, Trine 4 supports four-player local and online co-op. The puzzles reconfigure so that teamwork is needed to solve them, and the game can be set to allow repeat characters or just one of each. In either case, combat can be a little easier if multiple players work to battle the creatures.

Returning to the world of Trine

Trine 4: The Nightmare Prince hits all the right notes so far. I couldn’t help being drawn into the world and completely losing track of time. Simply put, it’s a joy to explore the levels, discover secret areas, figure out puzzles, and battle giant boss creatures. I’m looking forward to continuing the adventure when the game releases for PC and consoles on Oct. 8.